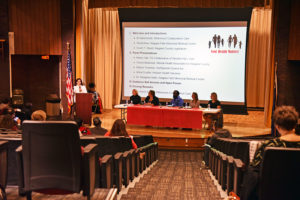 “This is not something we want to be known as number one in.”

Health data specialist Karen Hall made that statement during a multi-agency presentation Thursday on the health of young women in Niagara Falls.

Hall was responding to data that showed Niagara County leading the state in the number of drug-addicted newborns with 341.7 babies per 10,000 having to overcome neonatal abstinence syndrome because their mother used drugs regularly during pregnancy.

“I am not painting a very good picture of Niagara Falls,” she said. “These are the red flags that say we should be doing something here.”

Violence and trauma against girls and young women can lead to drug addiction and other risk factors like dropping out of school.

“My mother asked me to leave the house when I was 15,” Blacklock said. “So I moved in with a boyfriend’s grandmother.” 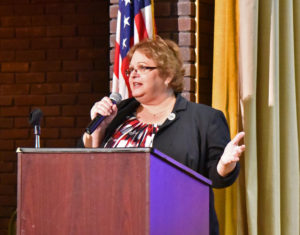 Cheryl Blacklock, executive director of the Mental Health Association in Niagara County, shares her own success story of recovery and sounds a hopeful note about the growing young-women’s health crisis in Niagara Falls.

Blacklock dropped out of school and started working as a waitress.

“The relationships that I kept finding myself in were very heavily involved in domestic violence,” she said. “I always thought that I could help whoever I was with, and actually I was the one looking for help. Every kick, every threat, every punch I got, I felt I deserved because I still hated myself. I still hated who I was, what I looked like, what I had done.”

“What actually helped, and I know this goes against everything everybody’s been told, but there was a judge that said to me about the eighth time I had my partner arrested, ‘The very next time you come before me I hope you have a good babysitter because you’re the one going to jail.’”

“At that time I knew I had to make some changes,” Blacklock said.

“I wanted to go back to school to get my GED because I didn’t want my children to think I was a loser,” she said. “You can succeed. You can recover, and you can get through it. But I have to tell you, it’s not an easy thing. I’ve spent many, many nights on the floor crying.”

Blacklock said it’s important for women suffering from abuse and depression to talk about it. 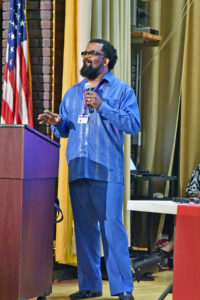 That’s what she and the counselors at the Mental Health Association are there to do.

Another panelist, Marlon Thornton of Northpointe Council, highlighted ways women can be more prone to substance abuse and become addicted faster than men, which can complicate diagnosis and treatment. Women are also more susceptible than men to relapse, Thornton said, and their menstrual cycles can complicate the regulation of hormones.

More than one panelist said health services for women in Niagara County were not as good as they should be. “Here in Niagara County resources are pretty limited, fragmented and hard to obtain,” said Alicia Coulter, a therapist from Horizon Health Services.

She described the problems young women face — especially after having a child — can lead to severe depression, which she likened to an earthquake.

If a woman has a history of substance abuse or depression, these can re-emerge as a woman goes through pregnancy.

“You can’t see the cracks,” she said. “The pressure becomes too much and the earthquake occurs.”

“Women have a severe lack of sleep after having a baby,” said Coulter. “You can lose yourself, becoming scattered and confused and there is often a lack of support,” she said. 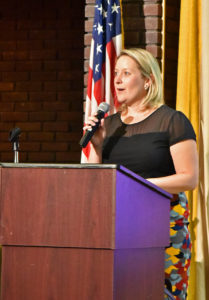 “We all want to be superwomen,” she said. “But superwomen don’t do it alone.”

One woman, a recovering alcoholic, who spoke during the question and answer period said: “The biggest disease in our city is silence.”

And if the city is going to experience an economic renaissance, according to Shelia Kee, executive director of the Niagara Falls Memorial Medical Center, the community and the children who will be its future need to be healthy.

Two zip codes in Niagara Falls (14305 and 14301) had almost double the neonatal abstinence of Niagara County — which is already highest in the state — and one surpassed that (14303).

Another disturbing public health statistic popped out during a Niagara Falls High School study: not one student who said they were experiencing depression or having suicidal thoughts would talk to a faculty or staff member about it.

During the question and answer period, one woman who addressed the panel said not enough was being done for the grandparents who are raising children from broken homes. Health officials seemed to agree this was an important area of consideration.

Several speakers in the audience and on stage bemoaned the lack of community members at the event. “This room should be filled with people” several said verbatim. Speakers said the conversation would soon continue with other events to consolidate the important knowledge gleaned and create an action plan. 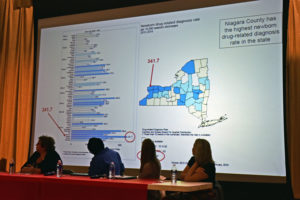 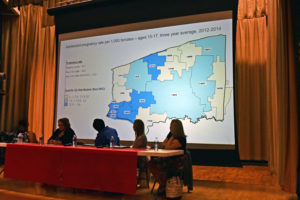 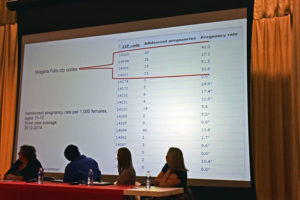 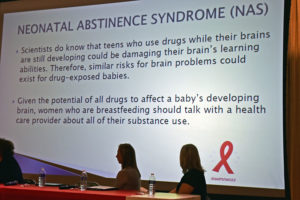 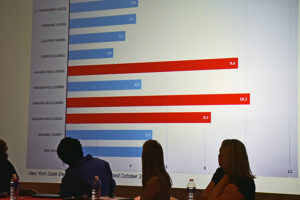