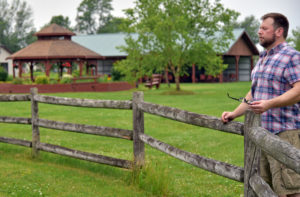 The Five Senses Nature Park on Ward Road in Wheatfield is a great place to get away and stimulate the senses.

It’s a lovely 14-acre space, with a rustic-looking wooden fence encircling a pond bisected by a wooden footbridge rising above it.

And while the charming nature of the gazebo and covered dining area might not be as readily apparent to some of park’s visitors on July 19 — when the Wheatfield Lions Club hosts a picnic for the blind — there are many other features of this unique park that stimulate the other senses.

Hearing is our most powerful sense after sight, and the many varying trees as well as the large pond provide an environment rich in nature’s noise and melody makers.

Those trees were also selected for their aromatic quality, and a walk around the pond found floral notes heavy in the air as well as chirps and tweets and the playful, percussive croaking of frogs.

But there’s an unexpected element in the extensive upkeep of the park, which was opened in 1990 and is located next to the Wheatfield Lions Club at 6535 Ward Road.

“We are hooked up with the Niagara County Sheriff’s work program,” said Mike Morgante, the member of the Lions who coordinates the efforts of those performing community service.

“If it wasn’t for the work program, the park wouldn’t exist,” Morgante said.

Maintenance duties include planting flowers, manicuring the gardens, cutting the grass and weed control. “It’s just like taking care of your own house,” Morgante said.

But much, much bigger.

Morgante said he is also reaching out to the North Tonawanda court system as an additional source of people power.

County Legislator Bill Ross implemented that program at the Five Senses Nature Park. He and fellow Lion Town Supervisor Robert Cliffe will be at the upcoming picnic as well as dozens and dozens of others.

Other Wheatfield notables involved in the early stages of the park include retiring Town Attorney Robert O’Toole, who wrote the initial grants to fund the building of the park.

While conversation and laughter will be prevalent at the upcoming picnic, visits to the park on other days reveal differing sounds in the air: the prevalent roar of Niagara Falls Boulevard waxing and waning, a Lockheed C-130 performing landing-strip maneuvers multiple times, the sound of cars arriving at the baseball field next door.

While rounding the pond with eyes closed and a constant hand on the fence, the sound of little leaguers and these modern marvels mix with the eastern bluebirds and other wildlife, revealing an awesome depth of sound.

The park’s calming feeling of openness and green space is conveyed by the park’s 14 acres of fields and trees. It was dedicated in 2012 to the memory of Henry Scibisz, who was instrumental in establishing the Five Senses Nature Park.

Upcoming events include a steak roast in August for the Niagara County Rotary club and the Niagara Wheatfield Kiwanis club. The free picnic for the blind on the 19th is being organized by Lion Art Kroening.

Morgante said the park also recently hosted several family picnics and that the facilities can be rented out for those and other events.