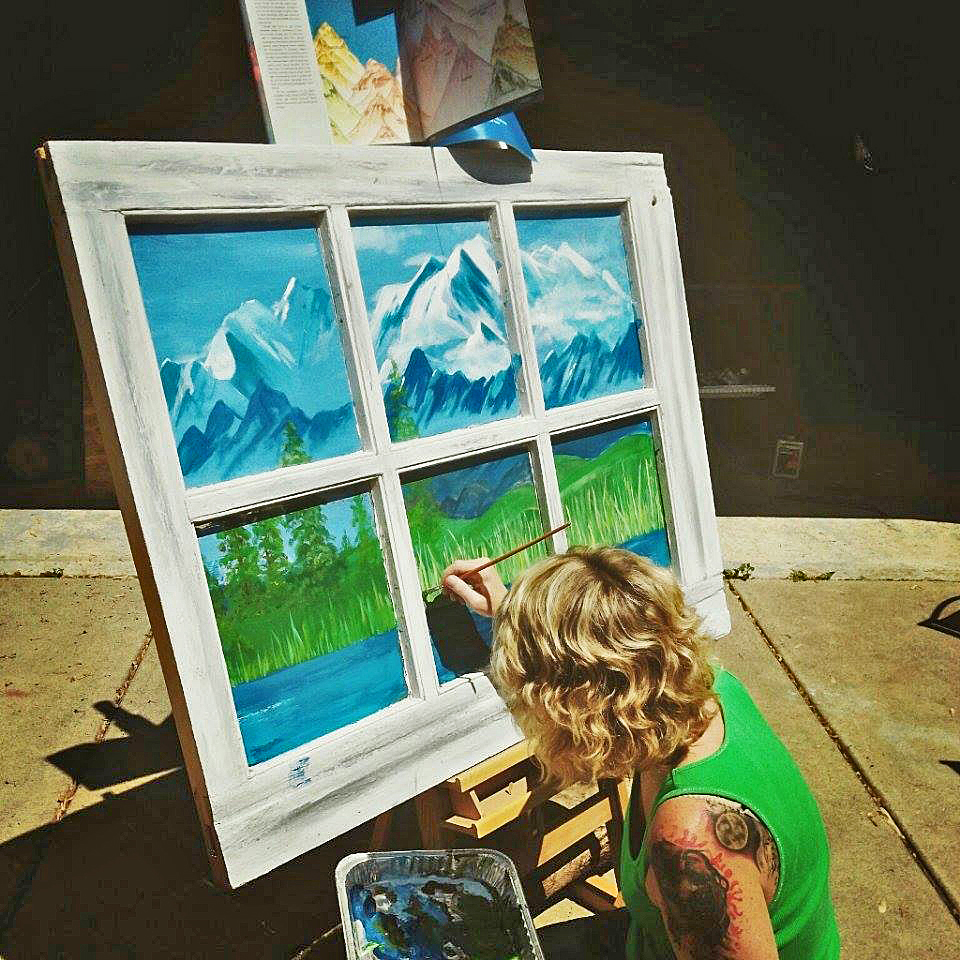 Theresa Holly has a penchant for art and she has begun building a reputation as an artist who chooses “unusual” platforms for her work.

Holly’s delicate hands waver for just a moment over her most recent painting before touching the brush lightly on the surface and adding another layer of dimension to the piece. The painting is in memory of a dear friend she recently lost to cancer. Though the background is composed of deeply pigmented and somber colors, the bright splashes of red draw the viewer’s eye to the left lower corner. It is really only then that one realizes the painting is not done on canvas but on a weathered four pane window Holly found abandoned by the roadside.

She steps back and surveys the change, then explains how this painting came to be.

“Actually, this is the second painting I did for Becky,” she said, pointing to another single pane rectangular window painted a mesmerizing, jewel-tone blue with a delicate butterfly at the top corner. “This one I did for her before she died. She loved butterflies. She kept it until she passed away, then it was given back to me. The new one is in remembrance of her when she and her husband Mike would visit their favorite tree, a massive white birch on Old Niagara Road, just past the Odd Fellows (nursing facility).” The background of the painting is a representation of the tree, while the fiery red in the lower left are tulips. “Becky loved tulips,” she said.

This touching legacy of love to a close friend is not the first one. In fact, Holly’s long interest in painting on non-traditional mediums had its beginnings with the accidental passing of her father, Francis “Brud” Holly, who fell from a ladder and died more than 20 years ago. Holly recalls visiting her mother, Nancy at her Center Street home and while viewing a barn her dad had built decades before, decided to start decorating it in his memory.

“I picked up street chalk and began drawing on the wood,” Holly said. “And it blossomed into scaffolding and gallons of paint to create the murals on the barn.”

Since “Brud” was an avid hunter and outdoorsman, the barn became home to a majestic, soaring eagle on the front and a regal whitetail buck on the side. The rich color and precise details on the weathered wood are indications of the amount of time and attention Holly put into the project.

“It is in tribute to him,” she said. “And I think that he’s been watching me and encouraging me. I think he probably likes the barn a lot.”

Holly has done a lot of art work over the years, once even painting boats in Florida when she lived there in the ‘80s. “I’ll paint on pretty much everything,” she said. “From old pieces of wood to roofing shingles to any found objects — like the windows. I really love it but I do call myself a starving artist.”

While she may not be “starving” in the literal sense, Holly makes her living as a phlebotomist, skillfully drawing blood from recalcitrant veins and collecting vials of biological samples of all types. She’s been doing it for 30 years at different venues but has settled at Quest in Lockport. Though she likes her daytime job and the patients she sees, it is the artistic side of her that unceasingly clamors for her attention.

“I have to start my work on weekends usually because if I have to stop working on it (to go to work) I’m haunted. I can only think about the painting project. I even lose sleep over it.”

She starting painting on discarded windows about 5 years back but was not seriously into it until about 6 months ago. Now, when she needs to get away for a while, she exits to her Bohemian-style basement to create. “I just start painting and whatever comes out comes out.”

One recent window painting — again in her father’s memory — is a fiery mixture of reds, oranges and yellows, a sunset at the Alabama Swamps. “It started with flames because of dad being a firefighter, but it turned out to be the swamps at sunset. He loved the swamps and he took us there when we were children. It seemed appropriate.”

Dozens of pictures of different sizes and mediums line the basement, and Holly is quick to explain that many of the works are by her 20-year-old daughter, Jessyca. “She does more dark and broody things than I do,” Holly said. “She even paints from dreams she has.”

It’s obvious that Jessyca has inherited her mother’s talent but has bent it in a different way, using various types of media and subject matter. She is a CNA at Odd Fellows and loves her job, but looks to art for the restorative nurturing it provides her psyche. Her life hasn’t been easy at times, she admits, but said “art literally pulled me out of a very dark place.”

Holly’s younger daughter, Nicole, who is 18 and a senior at Lockport  High School, doesn’t  have the same artistic proclivity as her mother and sister, but “she helps with organization,” Holly said. The genetic tendency toward artistic prowess evidently has passed from Holly’s father to her and then Jessyca, she said. But not everyone is cut out to be an artist and she knows Nicole will find her own niche.

The basement of her Hyde Park home is painting ground zero in the winter, but summer finds Holly out in the similarly decorated garage, painting with passion and jamming to her favorite music.

Her art even appears on a small fenced area where she once had a hot tub. It’s a lovely blue-hued landscape with a capricious yellow bird perched on a limb. That painting, also, was done in memory of another deceased friend.

“Her name was Bonnie and she was a mail lady,” Holly said. “She loved birds so much that she was known as the “bird lady.”

The next painting she plans on starting today and the only thing she knows about it at this preliminary stage is that it will have purple hues and will feature a moon. “I haven’t done anything purple lately and I love the moon,” she said.

Holly has done commissioned work on a limited basis but finds it hard to part with her creations. One of her window paintings is on display at John Lombardi’s Trattoria on West Avenue. She has much hope in her heart that in the future perhaps the unique paintings will lead to a new path in her life.

She is — after all — just getting started on a serious basis. Still, those who know her also know that her incredible love of others, her inborn talent and positive personality have gotten her through some rough spots and she’s on her way to bigger things.

One brush stroke at a time.

Posted In
people
Tags
About The Author