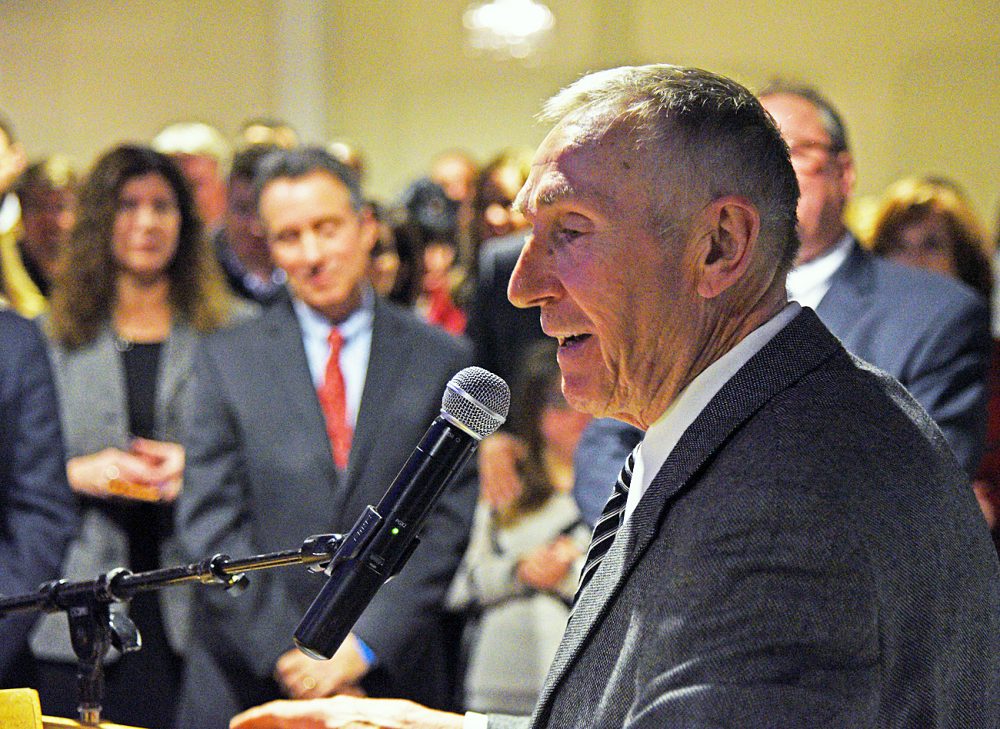 “I spent many good years here in Lockport over at the Kenan Center helping to run the Kenan Center Hockey School,” said former Sabres player Jim Lorentz, who was the guest speaker at last Saturday’s inaugural Lockport Hockey Hall of Fame induction ceremony.

“And I’d like to talk about a few people that crossed into my life when I was involved at the Kenan Center. One was the great Fred Sherro who first started the school there, and I am certain that it was the first hockey school ever in Western New York. And of course, Freddie went on to coach in the NHL with the Philadelphia Flyers, and very successfully I might add.”

“And when he left Western New York her turned the Kenan Center Hockey School over to myself and Steve Atkinson, and we had a such a terrific time running the school for a number of years. But as you grow older, I find it quite amazing as you start looking back over your life and you think back to people — in this case kids — that touched that your life and it may be just for a short period, a quick snapshot if you will. But that snapshot is always there for you to take out and examine.”

“Of these three people: two are hockey players and one was a young lady I met during the summer when they held an event there.”

“I remember one of the first things when we opened the school as an instructor you are trying to evaluate the kids as you see them. There was this one fellow and his name was Billy. And he had real thick glasses. And he was just an engaging youth always smiling, always having a good time. But Billy had a serious problem. Billy could not stop and he could not turn. Ladies and gentlemen, he was one of the fastest skaters in hockey school but he could only go in a straight line. Billy would get a lot of breakaways because he was so fast nobody could catch him.”

“So the first time I saw this Billy on a breakaway — and I don’t know if he scored or missed the net — but Billy went right on going and crashed into the boards. And, of course, I was concerned as an instructor and quickly rushed down there and picked him up and dusted him off and he was fine. Smiling. This went on practically every day. And Billy was just this guy going full speed and crashing into the boards. By the end of the week all the kids were egging him on, and the instructors were probably just as much to blame. It’s amazing how I remember that young Billy that we called ‘Billy Breakaway.’ I always wondered what happened to him. And I must say as an instructor it was one of my colossal failures because when Billy left the hockey school he still couldn’t stop and he still couldn’t turn.”

“Another engaging young fellow I met there. His name was Tracy. Again, it was the first practice. As instructors you always like to see how kids hold their sticks, and you want to make sure that everything is being done in the right way. This one youngster had a long stick and he had the stick tucked up under his left arm. And, of course, I immediately went over there and said, ‘Tracy your stick is too long; you’re holding it improperly. Can I show you the correct way to hold it?’”

“He looked at me with a big smile on his face. He took his glove off and he didn’t have a hand. It was gone at the wrist. And I felt terrible. Tracy never said a word, and we just kept going. He was there for a number of years and he was one of the better players, a great skater. I always use him as an inspiration. He was a mentor. He taught all of us that you only have a handicap if you believe you have a handicap. And he taught us that and he was a great inspiration to all the instructors but also all the kids that touched his life.”

“The third person that stayed in my mind is sort of an unpleasant memory, and I thought maybe I could unload my conscience tonight. It was summer in Lockport at the Kenan Arena. The ice was gone. It was June and there was a stage set up in the center. Some of the people here might remember The Gong Show. If they didn’t like the act they would come up and gong them.”

“The great Ted Darling was one of the judges. I was one of the judges, and there was also a young lady, a former Miss Teen USA, was also a judge. We were having a great time as the evening went on. The last contestant was in her early teens and she walked up on stage carrying a rifle. And her act was twirling the rifle. And folks, she was phenomenal. Never seen anything like it. This rifle flew faster than an airplane propeller. Just unbeilable, and for some reason that I cannot understand even today, I got up and gonged her.”

“She was bitterly disappointed. She walked offstage, a winner was declared and I started to make my way down the steps to leave the arena. Well, I was within seconds surrounded by her family, friends, relatives and the crowd. People were furious with me that I gonged this young lady. And Ted Darling — and I’m not exaggerating — was my bodyguard to get me out of the Kenan Center Arena.”

“And to this day I remember that event like it was yesterday. And my conscience has haunted me over the years. So if that lady is here tonight or if any of her family or anyone that was at the Kenan Center that evening, I apologize. Please forgive me.”