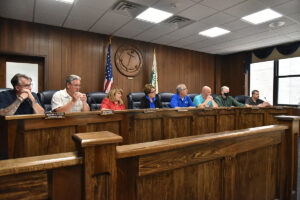 After months of trying to keep the Erie Ave. project away from public eyes, failing to hold a proper public hearing on what many argued was a new land use in the city as well as addressing air quality and other concerns from sources that didn’t have a financial stake in the project … members of the Planning Commission — including the NT Republican Party chairman Mike Carney (above left) — voted to approve Digihost’s site plan and send it on a path that will likely see the “bitcoin mining” facility operating at full blast by this time next year.

Despite the misdirect at the beginning of the meeting from Planning Commission President Tom Jaccarino (five from left above)  — another longtime associate of the NT Republican Party — hinting the outcome of the vote was still unknown, a sense of it being “certain all along” immediately filled the room after the unanimous vote.

“We have done our due diligence,” Jaccarino said.

Aside from the moral implications of running a fossil-fuel power plant 24/7 and 365 days a year solely for the purposes of “bitcoin mining” — a conversation completely absent amongst city and plant officials aside from Digihost promising a vague “more green” future — the operational concerns that got the most talk time Wednesday were fan noise and air quality concerns.

Fans? Don’t worry about it, they said, with additional sound attenuating solutions available if need be.

Air quality? The DEC has that already under control. “We are under the Title V permit amount of emissions that we have to fall under,” said a Fortistar employee and representative. “In the history of the plant, we’ve never had a violation.”

(But what does that mean for people with respiratory conditions and sensitive to changes in air quality? Additionally, “greenhouse domes” are known to exist around power plants like this and can negatively impact other metrics of air quality.) 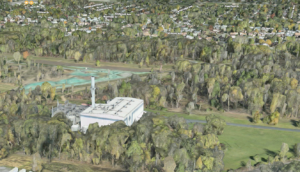 Surrounding neighborhoods will experience emissions it hasn’t been subject to since the 2000s.

Jaccarino also said the city’s firefighting leadership reported they anticipated no problems dealing with any incidents at the site.

What was up for approval Wednesday concerned Digihost’s request to place dozens of shipping containers across the frontage of the property stuffed to the brim with server computers that would perform the computational requirements that go along with “cryptocurrency.” The entire output of the Fortistar plant would be dedicated to this effort (which is *still* poorly understood here by just about anybody not rattling off a Wikipedia definition).

Meanwhile, the surrounding neighborhoods will experience emissions it hasn’t been subject to since the 2000s.

In fact, during the Aug. 17 question-and-answer session with Digihost owner Michel Amar and other Fortistar representatives, it became known the plant — and the few employees left there — would probably shut down soon as it was only running at 10 percent when actually supplying power to the grid. (As it stands, Fortistar representatives said the project should add 10-20 additional employees but there’s certainly no guarantee of that or much comfort to the thousands that live around the power plant that was built after their homes.) 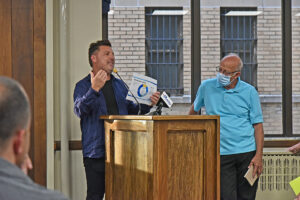 It was also revealed by Amar (above) that the 3-month moratorium that Alderman-at-Large Austin Tylec proposed would kill the deal but didn’t say why.

So we experienced a process dominated by people who wanted to see it go through and go through quickly.

Almost everyone associated with governance today bandies about the words “transparency” and “open government” but I’d argue they don’t understand and embrace the essential deeper issues and nuances.

Another important aspect missing from this rather brazen effort to push a deal through (which is also facing a “bitcoin mining” moratorium at the state level) was public outreach, which is also a critical aspect of open government as well as building up the community and its trust in government.

It’s clear the people currently running the city didn’t want to engage the public during any stage of this project. 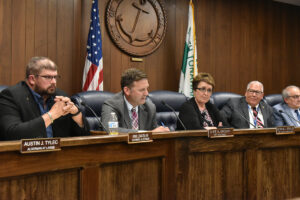 Members of the NT common council — including Eric Zadzilka (left) and Robert Pecoraro (second from right) — voted Aug. 17 against the 3-month moratorium on bitcoin mining, which allowed Wednesday’s planning board vote bringing “bitcoin mining” to North Tonawanda despite a proper public process.

Alderman at Large Bob Pecoraro (fourth from left above), who’s running for mayor against Austin Tylec if you hadn’t heard, performed some last-minute outreach because of the seemingly unpopular nature of the project (especially among people that live within its vicinity), but in general, it’s clear city officials who knew about it were keen on keeping such a large-scale increase in emissions as quiet as possible.

The results could be potentially messy and difficult, but it shouldn’t be optional for the public to be informed early and often. And not just with a line of text in a planning commission agenda.

(This seems to be one of the oldest-learned habits of this NT city administration that outreach and connecting with the general public — and not just members of the NT Republican Party — is beyond them either through ability or desire.)

Because if members of the public feel they weren’t listened to and instead were given a sham process that consisted entirely of the opinions of those involved in the deal and wanted to see it go through, that’s not how you build up the community in a city that wants to be thriving.

The entire planning board meeting can be found here as well as the Aug. 17 question-and-answer session with Digihost owner Michel Amar. 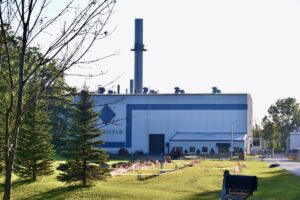 Expect to see big clouds of emissions when the approved Digihost plan to run the Erie Ave. power plant at full blast 365 days a year takes effect next year.