by Joseph KisselMarch 3, 2017
State says: "Experience has shown that if there is no apparent reason for driving at a reduced speed, the posting of signs with an arbitrarily lower speed limit does not result in voluntary compliance by the majority of drivers."

After several deadly traffic and pedestrian accidents throughout Wheatfield — and concerns about more to follow — many residents have requested changes to Shawnee Road and River Road in Wheatfield.

The state replied with an unequivocal “No” to Town of Wheatfield Supervisor Robert Cliffe in this letter written by Regional Traffic Engineer Thomas S. Messana, which was released through a Freedom of Information request.

“As a follow-up to your October 4, 2016, letter, we have completed our traffic engineering investigation related to your request for reduced speed limits on Route 265 (River Road) and Route 425 (Shawnee Road) in the Town of Wheatfield.”

“A study was completed for Shawnee Road in June 2014. The results of a traffic engineering investigation are considered to be current for a period of three years unless there is a substantial change in the highway characteristics. We have reviewed the area and traffic patterns of the highway and find that they are consistent with those in 2014. The need for a reduced speed limit is based on a thorough evaluation of many factors, including roadway characteristics, roadside development, and a statistical analysis of prevailing speeds as determined by radar checks. The majority of motorists drive at a speed which they perceive to be reasonable and prudent for existing conditions. Experience has shown that if there is no apparent reason for driving at a reduced speed, the posting of signs with an arbitrarily lower speed limit does not result in voluntary compliance by the majority of drivers. Thus, the lower speed limit results in larger speed differentials which can make the road less safe.

In the case of River Road, the 85th Percentile Speed was found to be 50 MPH. The 10-Mile Pace was 42-51 MPH with 91 percent of the traffic within the pace. Considering the data we have obtained for this area, we have determined that we will not reduce the existing 45 MPH speed limit at this time. 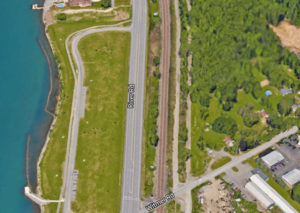 In the case of Shawnee Road, the 85th Percentile Speed was found to be 59 MPH. The 10 Mile Pace was 50-59 MPH with 76 percent of the traffic within the pace. Considering this data, we have determined that we would not reduce the existing 55 MPH speed limit at the time of our last study.

We recently completed a traffic investigation along Route 425, from Route 62 to Lockport Road. We reviewed the accident history along this section of road and have the following findings and recommendations:

— The pavement markings reflect current standards and do not warrant any changes.

— Install both centerline and shoulder rumble strips. This will provide the driver with both physical vibration and an audible warning that they are leaving the driving lane. This will help reduce Run-Off-Road collisions that resulted from vehicles that crossed the centerline and left the roadway on the opposite side, and vehicles that left the roadway off the shoulder.

— Install “STATE LAW DO NOT DRIVE ON SHOULDER” signs and installation of crosshatched pavement markings on the shoulders for both northbound and southbound traffic, in advance of Mapleton Road in order to reduce instances when motorists that use the right shoulder to attempt to pass a left turning vehicle at Mapleton Road.

— Evaluate either re-grading ditches or installing closed drainage at locations where roadside ditches are deep.

—Evaluate locations to install intersection Warning signs on NY 425 prior to unsignalized intersections.

Most of the above recommendations can be completed by our maintenance forces as weather and resources allow. The rumble strips will need to be included in a future Capital project for completion.

A follow-up letter was sent by Supervisor Cliffe:

First, I thank you and New York State DOT for conducting a thorough review of Shawnee and River Roads in Wheatfield, pursuant to my letter of September 15th.

I have reviewed your response regarding these roads. I have also spoken with Senator Ortt’s staff who have shared a response to the Senator from from Frank P. Cirillo, Regional Director.

I do appreciate the suggested improvements which are anticipated to add some safety to Shawnee Road, Rt. 425. However, I do not see a response to certain concerns of which we discussed in person. I am wondering if these were part of the survey of Shawnee Road?

The first was the concern for better signage at the top of the Hill just North of the intersection of Slusaric Road. Especially during bad conditions, cars coming fast over the top of this hill might not have time to stop or otherwise avoid a car waiting to turn left onto Slusaric. It would also help folks pulling out of the parking lot at the Country Barn or White Linen Tea House.

The second was the need for a street light at either Moyer and Loveland intersection with Shawnee, or especially, Klemer Road intersection. In fact, it would be best to have Klemer come out to a direct 90 degree intersection, and then add a stop light.

Can you please let me know if these safety concerns were addressed during this survey?

If you have any questions regarding our concerns, please feel free to contact me at your convenience.

I thank you in advance for your kind consideration of this matter.