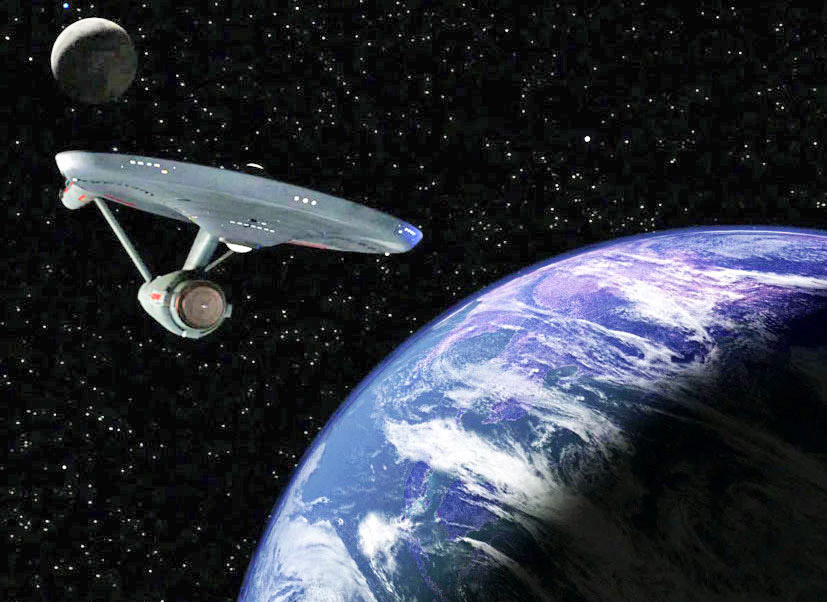 I never thought I’d become “one of those people.”

It most certainly happened, though, about three years ago when I watched “Star Trek: Voyager” for the first time.

The seven seasons of “Voyager” is one of the two 90s spin-offs of “Star Trek: The Next Generation,” the series that relaunched great science-fiction storytelling in the hour-long, episodic format way back in 1990.

Since then I’ve become a Trekker, Trekkie, Starfleet wannabe, 24th-century science-fiction dilettante whatever. I love everything about the show — even when I’m chuckling at it, which happens more the further one delves into the cannon — and I love what it stands for.

This comes through repeatedly in the hundreds and hundreds of hours of thought-provoking and nicely acted television, too many movies, an animated series that still I haven’t and countless video games and other fan-created content.

The totality of it is — without a doubt — comparable to a religion. (And what do they say about the difference between a cult and a religion? Numbers, which Star Trek fans represent a multitude of.)

So what does this “Trek” offer?

In a word, hope … for humanity, and the act of it uniting it to create something even greater.

Imagine it’s the 23rd century and humans have solved most of the immensely challenging social, political, economic, international and environmental issues of the next 100 years.

In a phrase, we’re still rocking in the free, um, universe. (Not at all like the apocalyptic fever of current TV champ “The Walking Dead,” which plays more into current fears that we’re simply not going to make it; maybe we don’t want to.)

Of course, in “Star Trek” there’s all sorts of species of biped aliens roughly the same size and shape as humans that routinely challenge the exploration and “humanity” of these various legendary Starfleet vessels and their crews whether human or not.

Dramatic purposes require alien obstacles to test their ingenuity as well as unity. (Gene Roddenberry, who’s a much better sci-fi messiah than say Scientology’s L. Ron Hubbard, famously declared that major dissension amongst the crew was not an appropriate avenue for story conflict.)

The overriding underlying message, though, is that we made it. (Things might seem on edge now, but I can imagine that 1960s America — with its riots, wars, assassinations and the threat of nuclear holocaust — seemed worse, especially because this all-new challenging time hadn’t been traversed yet.)

There’s a good chance civilization is not bouncing back after “The Walking Dead” — and maybe many thought the same during the 60s, giving way to the burned-out, ennui-filled 70s. But Star Trek cannon has some really dark moments, too, including 600-million dead during a “Third World War” that predates Zephram Cochran’s historic faster-than-light space flight that changed everything. (This week, Elon Musk proclaimed he’s building a rocket that in 10 short years will be capable of taking 100 people — in luxury apparently — to Mars in an effort to colonize the planet.)

But what makes “Star Trek” so provocative in the 21st century is the highly polarized condition of These States of America (it’s hard to say how “united” it is at the moment).

So what makes “Trek” so scandalous in the current environment is that it presupposes not just a unified Union but a *unified world* — throwing away the cherished notions: nations.

That’s just an unthinkable thought for so many folks. A nonstarter. Blasphemy. Treason.

2016 saw Brexit. Next up, maybe Texit? And that absolutely goes against the carefully developed ideology of “Star Trek.”

I can hear any of the Starship captains we’ve gotten to know so well asking, “How is that going to make us a safer, stronger union?”

How is that even being American?

In Starfleet and the United Federation of Planets, it’s all about cooperation and mutual aid — at varying times, admittedly — between the humans and Vulcans and Ferrengi and Klingons and sometimes the Romulans and even Cardassians.

The implicit message is that we can cooperate with other alien species, we certainly can do it amongst the various races of humanity and the nations they encompass.

And isn’t that what the United States is supposed to be all about? A melting pot of the people and races from around the world coming together in the name of freedom and the rule of law, two things “Star Trek” takes very seriously.

It also takes equality very seriously as Kirk says so memorably during episode nine of the original series: “Leave your bigotry in your quarters,” Kirk says to an helmsman we never see again questioning Spock’s loyalty simply because he’s Vulcan. “There’s no room for it on the bridge.”

Maybe it’s a hopeless simplification, but the core of this brilliant, hopeful fiction is that humanity — despite our shortcomings — can find our common link and put aside our differences that thwart us from achieving greatness as a species — not to mention escaping the surly bonds of this planet through interplanetary space travel.