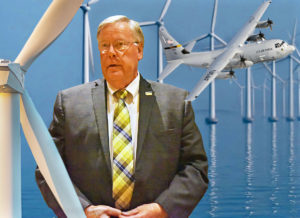 “This has to do with our air base and encroachment,” Godfrey said at Monday’s meeting.

“There’s been some articles recently in the paper, The Buffalo News, for one, that the Apex wind company that’s proposing the turbines has got a lot of people stepping up to say wind turbines will not cause an encroachment on our air base.”

“Granted, the C-130s and the new refueling planes C-135s fly at a different altitude. However, there are new missions that we can attract to Niagara. Right now we are remote piloting aircraft out of Niagara. We are working for a launch recovery mission. That could definitely jeopardize brining that new mission to Niagara.”

“With a base closure just around the corner — probably 2018 — we want to protect that base the best we can.”

“So there’s been some arguments on both sides. Retired military and otherwise claiming that the wind turbines in Somerset/Yates will not or may not affect the encroachment on our base.”

“Another caveat that has just come up is that the Apex wind company has a lobbyist firm that lobbies for them to put the turbines here. That same lobbying firm is also lobbying down in New Jersey where there are other bases to keep such encroachment out.”

“So while their lobbying firm is promoting a potential encroachment here they are protecting other bases elsewhere. In the New England area — in the northeast — surely we can expect one base to go on the BRAC list for closure.”

“Myself and Legislator Syracuse are very concerned over this. Obviously, everybody here should be. We are looking to put a resolution in at the county level, calling for some sort of investigation because I firmly believe that there is possibly a conflict of interest when you are promoting one encroachment and trying to prevent another; that puts our base in jeopardy.”

“But I just wanted the board the be aware of that. We are watching this thing materialize as we go. But this whole encroachment, the official word out of the Pentagon really has not come down. So this is just a caveat now that the lobbyists seem be playing to us in the middle.” 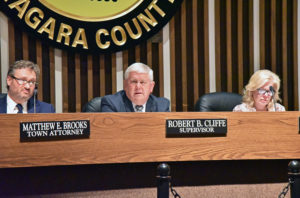 Supervisor Robert Cliffe: “There is a letter that we got that we will probably be reacting to later in the meeting that discusses towns’ need for local control. The state and the federal government keep taking more and more and more of the control away from us. The Association of Towns wants to fight back, wants us to sign and approve a resolution that Matt has worked, which is our position that we should have local control over things like Quasar. That we should have local control over things like the compressor and the dehydrator that shouldn’t be shoved down our throat against the wishes of the people in this area. That’s the resolution we hope to adopt and enact. It may have some effect on the Apex project.”

Godfrey: “That’s good. So you’re all aware the base isn’t on Wheatfield property. It’s abutting. However that base is a $200 million annual revenue stream for the county. $200 million. We can’t afford to lose that base. That’s a huge economic engine for this area. So we need to protect it best we can.”

Godfrey: “Thank you for the correction.”