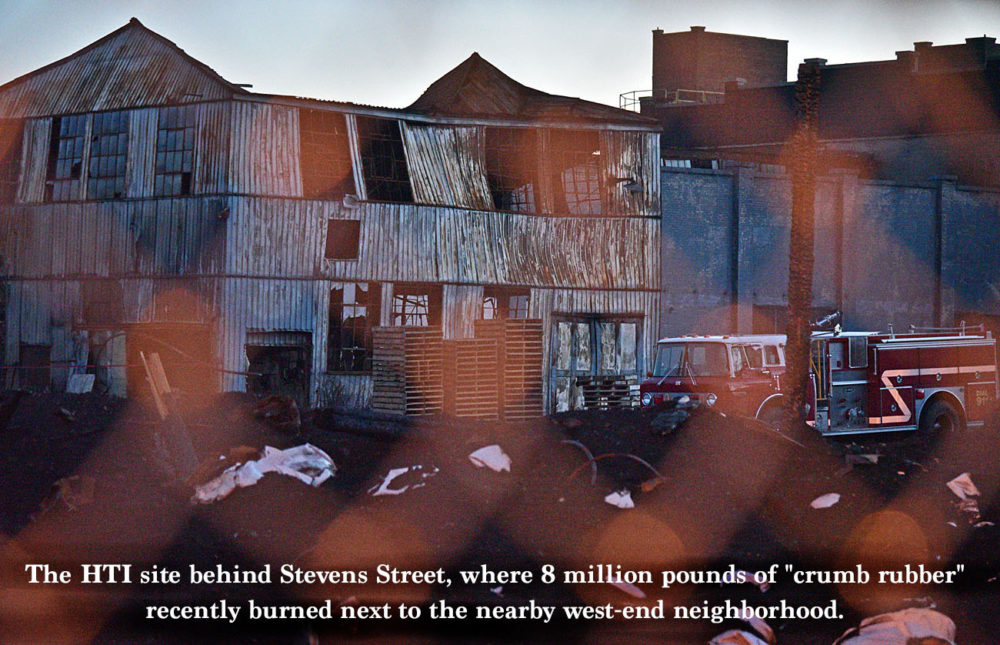 The Lockport Fire Department labored for days to quell the HTI “crumb rubber” fire behind Stevens Street — the biggest in Lockport’s history — but the ashes still smoldered Monday amongst affected-area residents as they asked a wide-ranging series of questions to gathered officials.

“Phase One was putting the fire out,” Devine said. “Phase Two is the clean-up.”

“As soon as the insurance adjusters are done it may get dusty and noisy again,” he said. 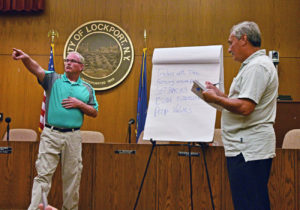 Dool said no site clean-up could commence until an asbestos test on the soil returns from the lab — possibly by the end of the week.

He also said based on the old ages of the buildings involved, there was a good chance asbestos would be found in the fields of remaining crumb rubber, which would necessitate a more intensive remediation process.

Concerns from the gathered residents included the security of the facility, remarking on large gaps in the old fences surrounding the site.

“They’ve had trouble with kids breaking in for the last 10 years,” said one resident.

Another resident reported kids were on the site during this past weekend.

Other topics included the future of the city’s water supply and how a change could have affected the recent fight against the massive fire.

During the past year, it’s been suggested that in order to save money Lockport could purchase water from North Tonawanda and shutter the existing water filtration plant.

“If we were reliant on North Tonawanda’s water supply, we would have never had enough water to put that fire out,” said Lockport Fire Chief Patrick Brady.

The fact that the fire occurred near the canal most likely saved the homes of Stevens Street residents.

Concerns going forward included the proximity of tractor trailers containing tires to area homes, with some residents saying the trailers are well inside the required 50-foot setback and some “practically on the property line.”

McCaffrey said the council has been discussing the “feasibility of increasing the setback.”

Dool said if Martin decides to rebuild HTI, he will face stricter codes than what was grandfathered in. 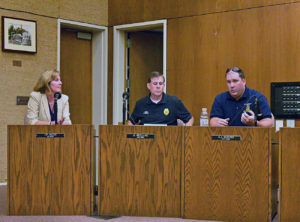 Somebody from the audience said: “I’d like to see him gone.”

Oates said, “I don’t believe we can stop him.”

Dool said there’s only so much policing he can do at the site. “I don’t have time to hold their hand and stay there 365 days a year. The law only allows me to be in there one day a year.”

Residents’ concerns about property values were encapsulated in this statement by one resident: “Taxes go up every year but our house is worth less.”

Another resident warned neighbors that their homeowners insurance would go up next year.

A representative from the Niagara County Health Department replied that anybody experiencing that should visit their primary care doctor immediately. 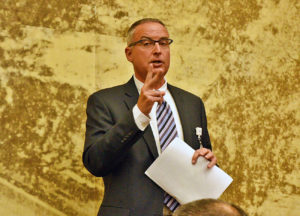 If they haven’t already, residents should throw out any vegetables from their gardens, and he recommended removing a layer of topsoil.

Grass should be cleaned, the representative said, and wipe off your pet’s paws when they come into the house after being outside.

“People on the west end are very pet friendly,” said one resident.

The discussion of the Stevens Street area delved deeper, though, as residents reported a fine black dust infiltrating their homes — even before the fire.

Officials also warned residents that a strong odor would occur each time a rainfall followed clean-up work. The odor itself is not toxic, they said. 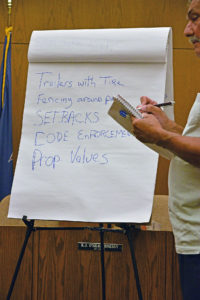 In other news, Lockport’s Shirley Nicholas and councilman Joe O’Shaughnessy said they have finally gotten the DEC to act on the ongoing toxic leak at 89 Mill Street.

The spill — from a 20,000 gallon underground fuel tank — has been known to officials for years, but because the owner lives in another state, they’ve found it impossible to get consent from him to allow state officials on site and begin remediation.

This development means the DEC can finally start the process of cleaning up the Lowertown site. 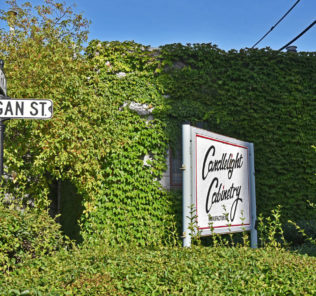 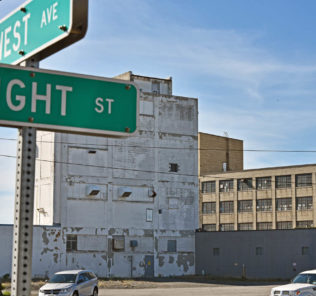