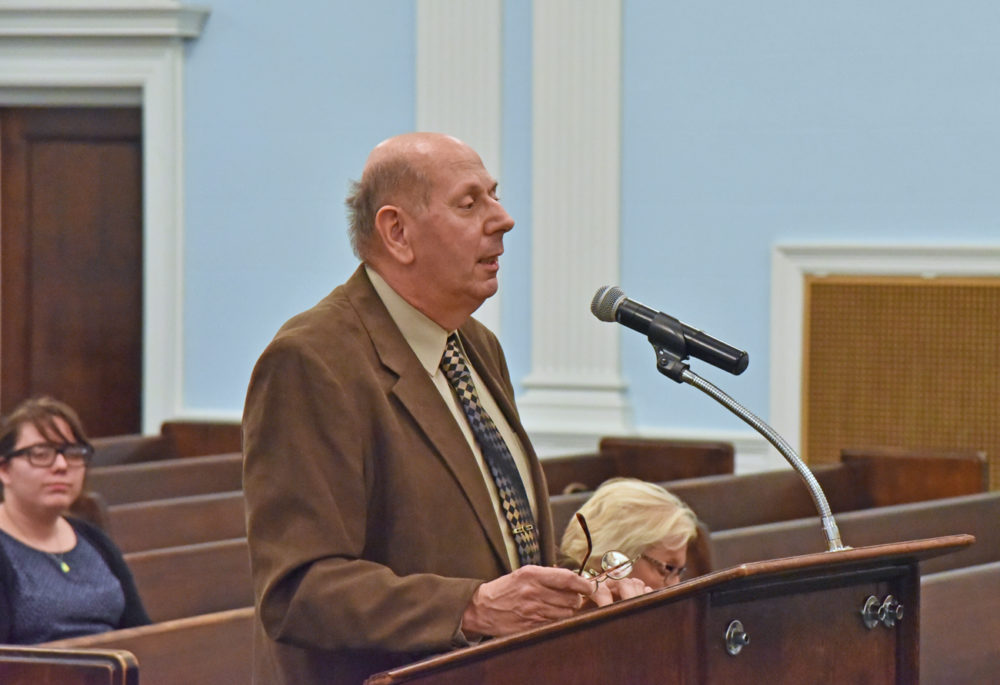 Ron Anderluh (above in photo): “I had the opportunity, and I wish more people were here at the budget hearings. I was probably the only here. Maybe one other person at times. The city could use some help not only on expense cutting but also on the revenue side. This room should been filled with people giving suggestions. Unfortunately, it wasn’t.”

“So I had the opportunity to sit through all the budget hearings, and it was good because all the department heads came forward and gave their own presentations: what they needed and what they felt they could cut and it was very informational.”

“I have some information here I’d like to pass onto the council. Some of it you’ve heard before from me throughout the last couple of years. I’ve broken it down into revenue, expenses and other.”

“The revenue side of it: As you all know. We instituted the parking meter program downtown and it was very, very successful. I don’t have the latest figures on the revenue. But it looks like it’s going to pay for itself in one year. Now we have to decide on phase two of the parking plan. And we should have it complete by next Memorial Day. We went through it the first time. It shouldn’t take us long the second time. We know what mistakes we made, and it will go better this time.”

“We need to get that legislation in the next couple of months so we can have this thing ready to go Memorial Day. Last year year we missed Memorial Day so it cost us maybe $40,000-$50,000 in revenue on that day for parking meters.”

“Also, we need to look at a new parking ramp downtown. It would be very expensive to do. The city owns a lot of land on Niagara street. We could put a temporary parking lot in there and get some revenue. We need to look where we could put another parking lot downtown. We are going to need it because these people coming into town, they are driving around trying to find a place to park. There’s not enough parking spaces for everybody. Which is a good thing. But it’s not hurting the taxpayers because these are all tourists coming into town.”

“I don’t have the latest figures also on where we stand with parking violations in the city. At one time it was up to $1 million. A million dollars from motorists who don’t believe in paying their parking tickets. And we have to do something about it.”

“Now that that we have one plate reader, it should be going up and down all the streets in Niagara Falls, finding where these outstanding parking-fine vehicles are and boot them. You’ll see how fast that money will comes in. They will pay them. If the cars are not worth it, you impound the car and sell the car off later.

“These are things that should be implemented in the coming year for extra revenue. It helps the taxpayer out.”

“Going through the budget — and I’ve mentioned this before — we should be doing more bulk buying with other towns, other cities. This could be on anything from salt to paper products. I think we have to look at doing more and more of this as a city. We all know we’ve done without a city engineer for the last three years. Why couldn’t we share an engineer from one of the towns or other cities? It wouldn’t cost half the price we are paying now for consultants.”

“Build up our tax base, which we doing in the downtown area now. But you won’t see it (revenue) for a little while yet because of the tax credits. Every year, most of the land that was empty lots and now you’re seeing buildings on it. So you’re going to see 10 percent each year, the revenue from those lots that are now hotels. But we’ve got to look for more ways of creating economic development.”

“As I mentioned before, get rid of that two-tier tax system. In the mayor’s proposed budget he shows a slight increase in the non-homestead tax and that can’t be. The businesses in town now are paying more than their fair share. To be able to go out and get businesses to come to this area we have to be competitive with other areas.”

“Grants. I know the police departments does a great job with their grant writer. Other departments don’t have grant writers. We have to do more looking for grant money. There’s more and more money out there. We’ve just got to go out there and find it. These department heads are going to have to come to you and say ‘Hey, is there any money available for this?’ If there’s a grant available for that, we look for it. If not, we have to hold off and wait. There’s a lot of money to be made out there on grants.”

“And the last thing on the revenue side is crack down on these absentee landlords and slumlords. It’s hit and miss. Unfortunately, we don’t have the personnel in the legal department to follow through in a timely way on this. Maybe we can look into hiring another attorney in the legal department just to handle these cases? It could pay for itself.”

“On the expense side: raises. You know. I come from a business background and I’ve been in business all my life in the retail management end of it. And if I got a raise it was based on performance. Not by who you are or what job title you have. It was based on performance. And I’m all for people getting raises, but some of the raises in this budget are astronomical. Where other people don’t get a raise, another person gets a big raise. To leave someone out is not right. Either you’re going to do it across the board in the same category of people or don’t do it at all. Everyone’s entitled to it.”

“Police. There’s not much more we can do with the police department. Everything is contractual there — same with the fire company. But I have mentioned to bring back the auxiliary police to work the downtown area on traffic control. I can’t see putting a police officer down there — on overtime — doing traffic. It doesn’t take a rocket scientist to direct traffic in the downtown area. The auxiliary police can handle it. They do it in Lewiston at Artpark and I don’t know why we can’t do it. I know the police chief says because they are not through the police academy we might have to use reserves. That’s like a retired police officer coming back.”

Councilwoman Kristen Grandinetti: “Mr. Anderluh we want to give some other people a chance to speak. It’s been about 12 minutes.”

Anderluh: “Insurance. Every week I see we are paying all this insurance money out to different individuals. I don’t know what the process is but how much are we saving self-insuring ourselves versus if we insure with a company? I don’t know what that figure would be.”

“First of all, granting raises while the city is in financial trouble and has grown only 4/10ths of a percent as of last year, is one thing. But there’s a lot of other things wrong with the budget that’s not being talked about.” 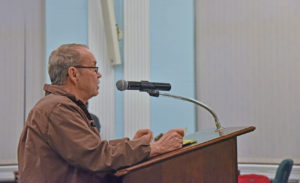 “The two-tier tax system should be equalized and be made a priority. The mayor has made promises to do so but this budget makes the non-homestead rate 92 percent higher than the homestead rate. That’s nearly double.”

“The city has a structural deficit of nearly $7 million. That’s if you consider the $2.5 million in the fund balance plus $4.4 million in questionable use of casino funds. I say questionable because of about $6.5 million of the $10.9 million has been authorized by past practice to cover what is referred to as — and you’ll see this a lot of times in the budget. Actually you’ll see on the casino expenses. Budget for portion of the debt, loss of taxes from the casino area, police and fire, and economic development. I don’t why economic development should be in there because every time you have a project it’s voted by the council. It should be a separate line item.”

“The other $4.4 million seems to be contradictory to the recommended use of revenue authorized by NYS finance law 99H.”

“The last point is. Despite an earlier Gazette article reporting the fund balance was used to cover a structural deficit in the 2014 budget of $4.4 million and 2015 budget of $4.9 million. Knowing that, does anybody know our fund balance is and has been generated?”

“I know that a fund balance is generated from over-allocated funds. But in our case from where? Because if it comes from casino revenues shouldn’t that money go back into the casino fund? That was a question.”

“Since the city started using casino money many residents believe that it has benefitted the city in numerous ways. Many improvements were made with casino money. Roads re-paved. New fire trucks, police cars, demolition of vacant houses. Equipment for DPW and economic development. But in a few years, the city might not have any casino money left.”

“As for the budget, it’s good there’s almost $2 million less in casino money. In two years, the casino money could be gone and the progress we made with the money we received will be a thing of the past. It’s time to get the city’s spending of the casino money under control.”

“As a city we face many financial challenges. Is it wise to give out pay raises when taxes for businesses are going up? It’s good they are going down for homeowners but they should be going down for everybody. People want to see the spending under control and not pay raises.”

“Also, there also needs to be a plan to address the garbage bag problem. The blue totes will only hold so many bags. When they get full people put them on top of the totes or on the ground next to them. They don’t get picked and then we find them in vacant lots and our alleys. Hopefully, this is something that can be worked on. We never had a garbage problem until this new plan was put into place. This is supposed to make our city cleaner; it seems to be having the opposite effect.”