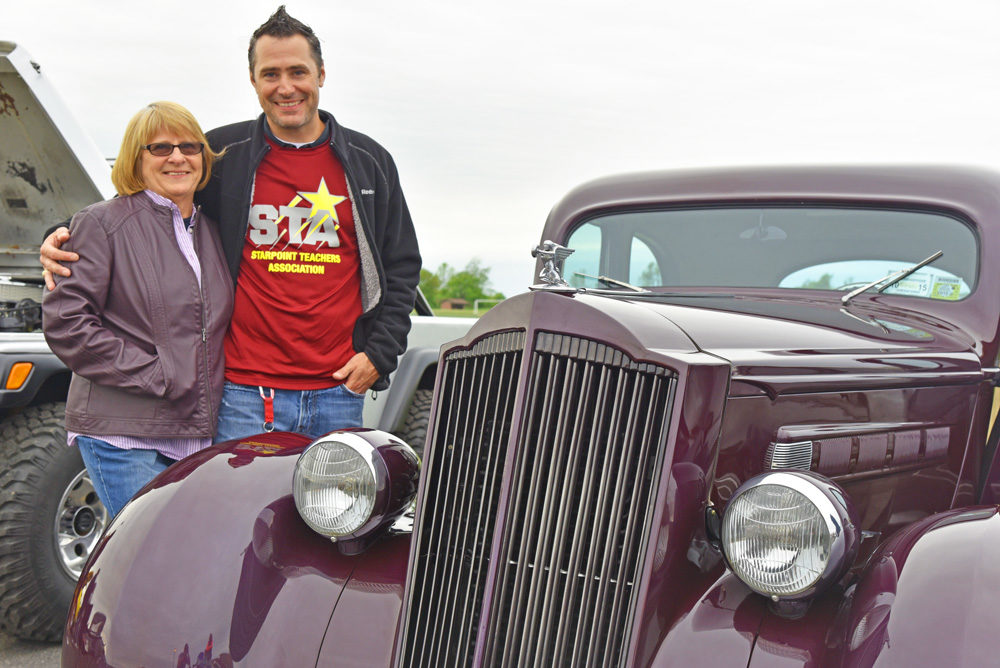 “He had about 10 years into the restoration and he was diagnosed with lung cancer,” said son Jason Gielow.

Denny Gielow — whose license plate read ROD FATHER— was well known in the area for restoring and hot-rodding vintage cars as well as coaching hockey in Wheatfield and serving as northeast representative of the GoodGuys Rod & Custom Assoc.

Growing up in the area, he stormed the roads in a yellow ’62 Chevy called “The Hairy Canary” that was impossible to forget.

Many of Jason’s earliest memories center on bouncing around the back seat — before mandatory seatbelts — with his three sisters while Denny burned up Wheatfield’s back roads.

That’s where he found the prized Packard that would end up being his last restoration.

It was a already a gorgeous car when he managed to persuade Carl Zellner to sell it to him.

“He wanted to have the whole thing redone,” said Gielow. “He was a hot rodder. He just couldn’t leave cars alone.”

Coming of age during the halcyon days between World War II and the Korean War, Denny Gielow lived out a “greasers” version of “The Dukes of Wheatfield” complete with a high-speed chase and a night in jail when his father wouldn’t bail him out to teach him a hard lesson.

The Korean War found him enlisted, but a collapsed lung during basic training kept Denny Gielow at Fort Hood in Texas doing what he happened to love … fixing cars as well as trucks and tanks and other things that move.

His other love, Linda Scheuckler, waited for him in Wheatfield. And when he returned mostly reformed by the rigors and discipline of the Army, he started a family with her.

Cars would be a driving force for the Gielows even beyond Denny’s death from mesothelioma cancer two years ago. The family enjoyed a slew of classic cars throughout the years, and the family often went on car-related jaunts to Florida and elsewhere.

Jason’s referring to the heated garage Denny Gielow built to work on numerous car projects throughout the years.

“He lived in that garage,” said Linda Gielow.

Numerous modifications to the Packard include “ooh”-soliciting automatic power doors, niceties like air conditioning as well as a dash-mounted LCD screen.

Denny’s aesthetic changes on the outside include modifications to the bodywork, removing various large chrome pieces and the side-view mirrors, giving it hot rims and a new color.

But then time ran out.

Having worked for years at the Durez chemical company in North Tonawanda, like many of his co-workers, Denny Gielow succumbed to lung cancer after two years of battling and treatments.

Jason Gielow handled the completion of the restoration, which included the paint job— inspired by his daughter Ava’s favorite color.

“He wanted something dark. The ’40 Chevy was maroon but we wanted something newer like midnight plum. When you look at it farther away it looks like black coming at you. Then it’s got the purple tint. There’s actually a blue metallic coat inside it, too.”

“This car is totally hot rodded out.”

Those interested in seeing the Packard first-hand can do so this summer during Canal Fest in North Tonawanda, where the family will gather again to pay tribute to a man’s lasting memory and influence and love.

“Denny passed away before it was finished,” said Linda Gielow. “But guess what? It’s finished.”

Jason Gielow, an English teacher at Starpoint High School, returns to his mother’s home on Schultz Road every weekend to take the Packard for a drive.

“He never got to go for a ride,” Jason said. “But every weekend I get to ride with him.”

Posted In
People, Town News, Wheatfield
Tags
About The Author

Joseph Kissel
Joseph Kissel is a journalist, editor and photographer. He is also a candidate for the 9th Legislative District in Niagara County.
More in Wheatfield