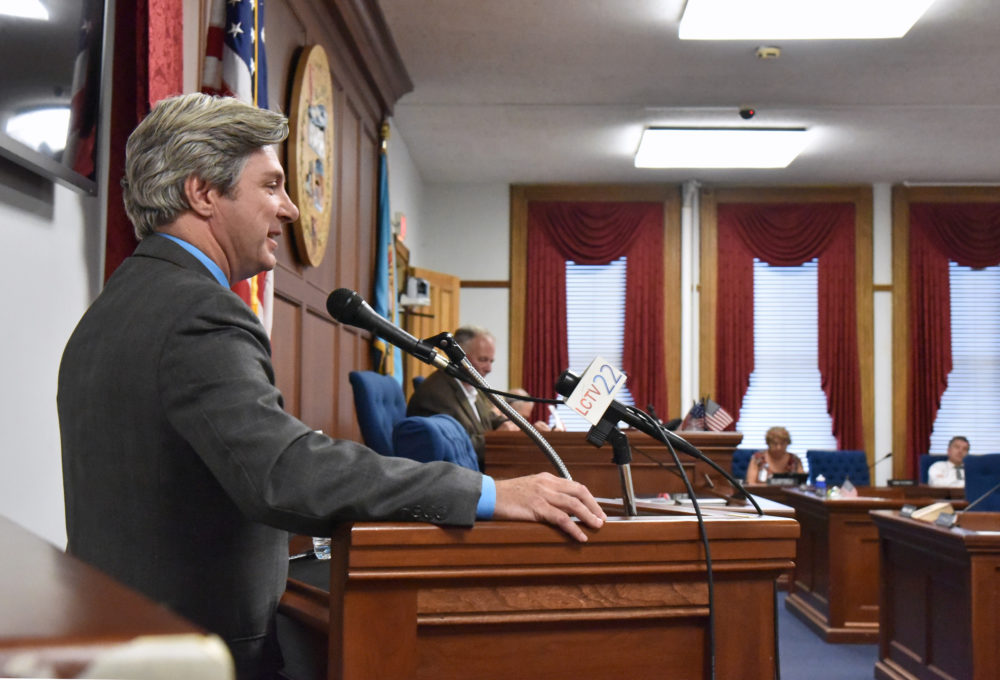 If you’d like to speak for “The Good of the County” at Niagara County Legislature meetings, chances are you’d be waiting two or three hours to do so.

You’ll also find the meeting has just been adjourned. So the gallery is mostly empty, and department heads and legislators could be heading out. Furthermore, there’s zero record of your comments in the meeting minutes.

Wolf has made the trip to Lockport several times to speak before the Legislature. (Earlier this year, the open government group persuaded the legislature to make public its financial disclosure forms, which for years were kept shielded from the public’s right to know whether their legislators are involved in a conflict of interest.)

However, Legislature Majority Leader Randy Bradt (below center) responded that non-agenda public speakers (“For the Good of the County”) should remain at the *end* of the meeting. Bradt, however, would support keeping the meeting in session so public comments would finally be part of the meeting minutes.

Since it was a committee meeting — which is meant to approve resolutions for voting at the regular session — following that there was much back and forth questioning, misunderstanding, and discussion.

Eventually, after being repeatedly insistent that non-agenda items stay at the end of the meeting, Bradt abruptly changed his mind.

Bradt now proposed that the 30 minutes at the beginning of the meeting dedicated to public comment on agenda items could be used “For the Good of the County” … if there is time remaining.

Virtuoso and Wolf were not pleased.

“I don’t see why it’s so hard to make the change wholesale?” asked Wolf before agreeing to Bradt’s stipulation.

“Governing is about compromise at times,” Wolf said. “Lots of times, I should say.”

The final resolution will be presented at tonight’s 7 p.m. meeting and voted on by the legislature.

FULL DISCLOSURE: The author of this article, independent journalist Joseph Kissel, is the secretary of The Buffalo Niagara Coalition For Open Government, and is also running against Randy Bradt to represent the 9th District in the County Legislature. Kissel has been covering the Niagara County Legislature for more than two years, and reporting on Niagara County his entire journalism career, which started at Syracuse University’s S.I. Newhouse School for Public Communications. Bradt started his career in the legislature by being groomed to take over for the brother of embattled OTB president Henry Wojtaszek, who has been repeatedly accused of public corruption as well leading the legislature majority despite being un-elected and pleading guilty to a campaign-finance misdemeanor last year.