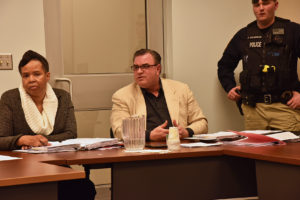 His first words as a member of the Niagara Falls Water Board were, “You promise?”

Nick Forster, (above center) head of the Niagara County Democratic Committee, lifelong Niagara Falls resident, and the Niagara Falls Common Council’s new appointment to the five-member water board, asked that question of a resident hoping for consideration and leniency regarding his sky-high water bills after leaving his tap on — way too much it turned out — to guard against freezing pipes.

Soon after that, a series of last-minute walk-on resolutions were voted 3-2 onto the agenda, and an identical vote found the water board’s top administrators, including executive director Paul Drof as well as counsel John Ottaviano, out of jobs.

Board member and former Niagara County Legislator Renae Kimble (above left) said the applicants would be using the standard water board contract.

Janese also questioned Forster, who’s been a board member for 29 days, regarding the new member’s roles and timelines in regards to reaching out and interviewing to the about-to-be-hired administrators.

“Was this advertised anywhere?” Janese asked. Forster said, ‘No.’ “It would have been prudent to contact the rest of us,” Janese said. “And I think it would have been a good idea to interview more than one person.” 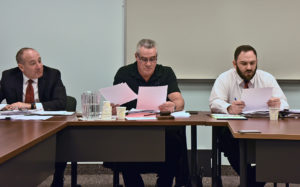 Janese then asked who interviewed the candidates.

Forster replied himself, Kimble and O’Callaghan.

Independently they each answer ‘no.’

Board Chairman Gretchen Leffler went further and suggested Forster started acting on board matters before his term started less than a month ago.

“That’s nothing but speculation,” Forster said.

“I feel there is a conflict of interest as Nick Forster, being the chairman of the (Niagara County) Democratic Party and having received funding from the United Steelworkers and other unions. I want that to go on record.”

“You should go on record that Nick Forster has never received any money from the United Steelworkers,” he said.

“The Niagara County Democratic Committee has,” she said.

“Get your record straight. They never have given Nick Forster any monies.”

“Madam chair, if you’re going to sit from the podium and take shots at me, that’s fine. But make sure your facts are right.”

“My facts are correct,” she said.

“You’re the chairman of the Niagara County Democratic Committee … ”

“No, your facts were not right … ” Forster said.

Speaking over Leffler, who’s saying, “And the committee received money … “

“You said that Nick Forster took money from the steelworkers … “ 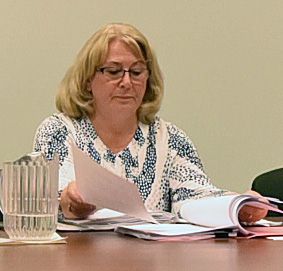 He continues as she continues: “As chairman, as chairman of the Niagara County Democratic Committee … “

“And you receiving from the United Steelworkers.”

Soon after Leffler was voting ‘yes’ on her own removal as water board chairman, passing the gavel to Dan O’Callaghan, who has 29 years of experience in the plumbing business as a project manager.

With the wholesale changes at the top underway, O’Callaghan said current employee Rich Rolle would be invaluable during the transition period.

Longtime employee Joseph LaGamba was also promoted to Director of Buildings and Maintenance.

Janese questioned why the transition period had to be so abrupt. (Later, O’Callaghan said it was because the top-three administrators were making moves to have their contracts re-upped before the new appointments joined the board.)

O’Callaghan also said he’s setting up a committee that will individually handle ratepayer complaints and issues and “get to the root of the problem.” He said he’s heard a lot of negative feedback about residents’ attempts to sort through water and pipe issues with a water board that took ratepayers to court even when it was clear the city bore responsibility. 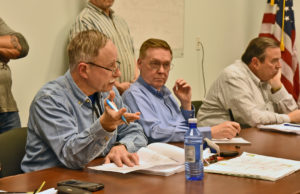 “You gotta feel for those people,’ O’Callaghan said.

“We appointed Forster because we had no real communication with the board,” said councilman Kenny Tompkins, who also spoke at the beginning of the meeting, asking the board to re-instate the recently cancelled “Drips” Program.

“The former water board member Gary Laible is a very nice man but he’s also not a very aggressive man,” Tompkins said.

“A new era is dawning for the rate payers and users of water in the City of Niagara Falls as a newly constituted voting majority of the Niagara Falls Water Board acted decisively at today’s meeting of the board to carry out an aggressive agenda of personnel and operational changes focused on professional and staff appointments stressing leadership and management skills and bringing a fresh perspective of customer service to all aspects of the organization.”

“The majority block, consisting of former Niagara County Legislator Renae Kimble and newly appointed members Nicholas Forster and Dan O’Callaghan opened the monthly meeting of the board with the removal of the agency’s three top administrators including Executive Director Paul Drof of Clarence. Also let go were Director of Administrative Services Tony Hahn and Director of Infrastructure Operations Norman Allen. Replacements were announced as: Rolfe Porter, Executive Director, (Porter previously served as the acting Commissioner of Water for the City of Cleveland, Ohio and as Executive Engineer of the Erie County Water Authority), James Perry, Administrative Services/Human Resources, and the engineering firm of Clark Paterson and Lee on a contract basis to handle infrastructure issues. Kendra McClain, MBA, was named to the post of Director of Financial Services with a start date in mid-March. Legal staffing was addressed with the appointment of David Sanchez of Lewiston as General Counsel and Nicholas P. Amigone III of the firm of Rupp Basse Pfalzgraf Cunningham LLC as Special Counsel.”

“From the current staff of the board Chief Waste Water Operator Joseph LaGamba was named to the vacant position of Manager of Buildings and Maintenance. Mr. LaGamba held the number 1 position on the civil service list for such position. This promotion provides the executive director and others with a trusted and valuable long tenured employee who has earned the respect of his co-workers.”

“While it was acknowledged that at least one former employee will receive a severance package pursuant to existing contractual provisions, the changes will not adversely impact the fiscal position of NFWB as savings will be realized through hiring at lower salaries and other cost-cutting measures.”

“In a joint statement, the board members thanked the outgoing employees for their service and wished them well in the future. They went on to assure the public that the singular focus of the board majority is to insure that an efficient and competent management and operational team supplies water to residences and businesses at the lowest possible cost while maintaining a system that insures public health and safety. The action plan they laid out for immediate attention includes but is not limited to:”