From North Tonawanda to Tinian: A Story of John Lukasik 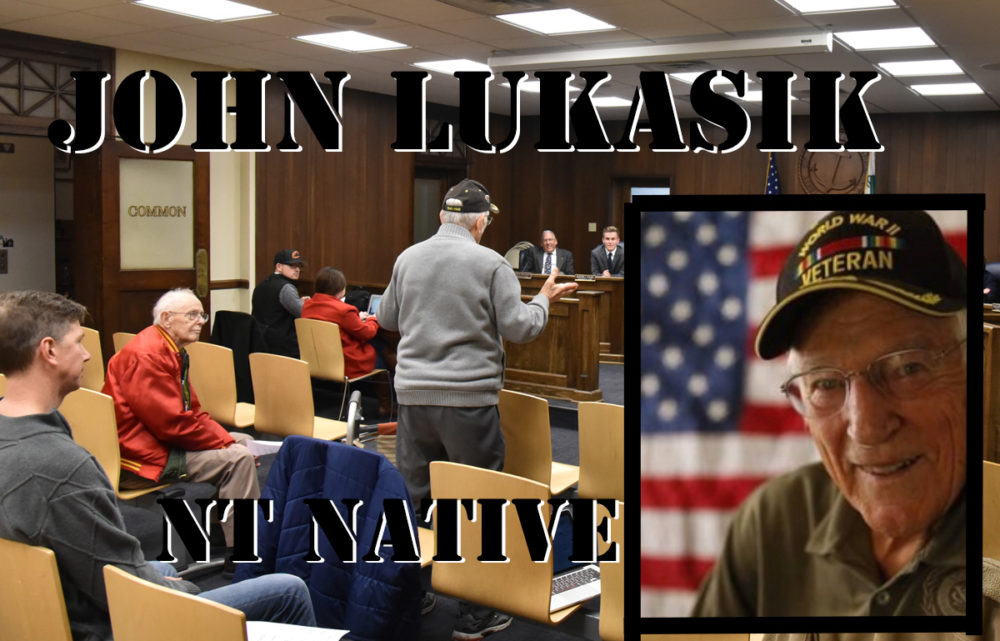 As “Citizen Kane” played in one of Buffalo’s lost movie palaces, North Tonawanda resident John Lukasik sat in the audience as Orson Welles made cinematic history. That is, until the lights abruptly flashed on that Sunday afternoon on December 7th, 1941, and an even larger history wrote itself.

“I remember thinking, ‘Where was Pearl Harbor?”

That Monday an 18-year-old John and a buddy went to a Marine recruiting station to sign up — out of anger at the sneak attack — and because “the Marines had a really nice dress uniform,” Lukasik said. His buddy got in, but John got rejected. Too many fillings in his teeth …

It would take another two years of working at Bell Aircraft inspecting P-39 pursuit aircraft before John was drafted in the Army in January 1943. After his induction at Fort Niagara, John went to Camp Stewart in Georgia as part of the anti-aircraft artillery division. Instead of building planes, he’d now be shooting them down.

That didn’t fly with Lukasik, who immediately requested a transfer to the Air Force. “I thought I’d be more useful there.” And after three months, the chain of command agreed and made him an airplane mechanic. “I spent two years in the States in engine school and metal school, fixing the sides of planes, before I was shipped to Tinian. And the first thing I thought when I heard the news was, ‘Where in the hell is Tinian?!?”

When Lukasik arrived on the tropical island of Tinian, a 13-mile-long island covered with sugar cane and some 1000 miles east of Hawaii, he noticed that the original islanders were fenced in and housed in huts and barracks with their bathroom facilities along the sides of their housing. John described the conditions as “subhuman.”

“The original inhabitants were prisoners on their own island, and we had the rest of the place to ourselves,” Lukasik says. When done with his job painting the undersides of B-29s black to eliminate reflections, he would go travel around the island with buddies and explore the massive cave network that existed on this island made of coral reefs.”

“The Japanese were planning for the invasion of their islands for years. And when we’d go exploring the caves, we find the clothing of Japanese soldiers and their anti-aircraft guns self-destructed.” John says when the Japanese would abandon their positions, they would destroy their weapons by putting a projectile at the end of the 8-inch barrel and then firing the weapon.

Although Lukasik said Tinian was originally to serve as a stepping stone for the invasion of mainland Japan, things changed with the arrival of a top-secret, specialized crew that also worked on B-29 bombers, specifically two bombers called Boxcar Willie … and the Enola Gay.

“This compound was surround by a high fence and the guys in the crew were really cocky. I remember them saying to us one day through the fence, ‘You’ve been here one-and-a-half years and the war is still going on. Just wait. We’ll finish it up in a couple of weeks.”

Soon after, Lukasik heard that something called an atomic bomb was dropped on the Japanese city of Hiroshima. And then another one on Nagasaki. Sure enough, within a few weeks, the Japanese surrendered. “When I heard about this stuff I actually got scared. We were hearing things like if you don’t harness this power, it can destroy the world.” Of course, Lukasik was and still is right. “We had no idea what it could do.”

Although Lukasik wasn’t greeted with a huge tickertape parade one might associate with WWII homecomings, he was happy enough just to be home. Although he’s had some desire to return to Tinian throughout the years, unlike some veterans, he never did it. “It wouldn’t exactly have been a cheap trip. And what do you do? Take the wife with you?”

Back home, Lukasik did get married to his V-Mail sweetheart Shirley after finding work back at Bell Aircraft as a filing clerk. “I didn’t want any part of that, so I went over to Wurlitzer and worked on jukeboxes and eventually became an organ tuner.”

Lukasik also spent time with buddies like NT native Tony Rudzinski, who served in the Army during WWII. “I’ve known John practically my whole life. After the war we courted our wives together.  He’s always been a good friend and very generous.”

Lukasik said that he was well treated at home as a veteran of WWII. But he acknowledges that hasn’t been as true for veterans of other wars like the Korean War, which he calls The Forgotten War. Or the Vietnam War, which he says the media pronounced a police action by the United States. “The soldiers resented it. Those veterans looked at us and said ‘you got all the glory and the parades.’”

Lukasik said the difference between WWII and following wars is that the other wars were “political and WWII was about the survival of democracy. We crushed the dictatorships and kept them away from our shores.”

Another change throughout the decades has been the way Memorial Day is celebrated. Without an undue amount of scorn, Lukasik said, “Today’s kids barely know what it’s all about.” Lukasik, who is extremely active with the Steven Sikora Post 1322 American Legion, said that’s due in large part to the way public schools, with their overemphasis on test scores and canned curriculums, fail to promote Memorial Day.

“Memorial Day is about the blood of veterans, the flag and sacrifice,” Lukasik said. “If we are going to teach the younger generation that, it’s going to be up to us to do it.”

This article originally appeared in the Tonawanda News in 2001 as part of their Memorial Day edition. It’s published again in honor of an NT native whose second life was lived at Sikora Post and was active in local politics during much of his long life …