by Joseph KisselNovember 2, 2017
"We have kids who are afraid to go school. We have kids that are getting bullied, harassed, assaulted. And that cannot be excused away by saying it happens everywhere." 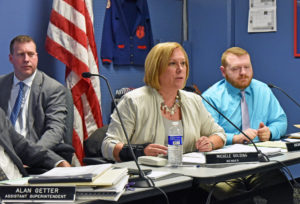 The Lumber City received national and international attention for a recently adopted anti-bullying ordinance — based on one from Shawano, Wisconsin — and a fight in the high school cafeteria brought more media coverage after one student was sent to the hospital and a 10-second video was uploaded to Instagram.

“It’s a sad situation when my daughter who lives in Tennessee sees her alma mater in a negative, terrible way,” said school board member Michelle Golding (above center) at Wednesday’s meeting.

“We are doing so many positive things in this district,” she said. “We are banging our heads against the wall when we have this negativity attached to our school district. It’s terrible! And I’m really fed up with it.”

“I mean right now everyone at work is like ‘How ya making out in NT?’ You know, I hate to see our community trashed because there’s so much good.”

The problem with violence and bullying isn’t North Tonawanda’s alone, said teacher William Crago, founder of the group that brought light to the issues taking place at the middle school. 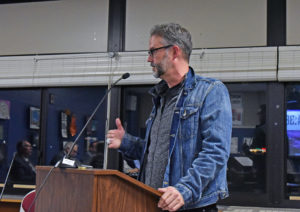 “I certainly don’t think we have a unique problem here,” said Crago (above).

“I think we have a societal issue of violence in that people resort to fighting as a solution,” he said.

“When I first came here back in June to represent the Coalition I used a phrase that I didn’t realize at the time how much weight that phrase was going to carry when I used ‘the culture of violence.’ And those words have been repeated in the media — not by my choice.”

“So I think it means we have to pay attention to those kids who are having negative experiences.”

Crago said increased security at the middle school has been a positive change, and cited discussion at Wednesday’s meeting about character education programs.

“I have right from the beginning been more focused on the preventative,” Crago said.

“We need to change that culture. We need to get our students from a very young age recognizing that violence is not the solution; that there are other alternatives.”

Crago said the Northpointe Council offers a free K-12 program that focuses on violence prevention. “I would like that to be considered a priory for our district,” he said. 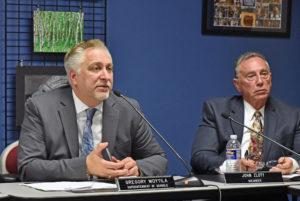 Instituting a district safety committee is also important, Crago said. “I brought that up when I was here in September. I haven’t heard anything back about that. The district where I work, we have one. And they discuss all sorts of safety and security issues — not just the specific things we are talking about tonight.”

“More than 90 percent of the problems they had in the middle school were caused by a handful of students,” Crago said. “I believe the number was seven students. Don’t quote me on that. Those students have now moved into the high school and we are seeing some issues there.”

“There are a lot of great kids in North Tonawanda. And I appreciate that. But we have kids who are afraid to go school. We have kids that are getting bullied, harassed, assaulted. And that cannot be excused away by saying it happens everywhere. We have to take that seriously.”

Golding offered a solution to one aspect of the violence and bullying: “No cellphone use when you’re at the high school,” she said.

Golding said a high school in Denver, Colorado, has implemented that policy.

Repeatedly throughout the meeting board members and school officials cited The NTHS Parent Partnership as a resource parents should take part in.

The meetings are led by high school principal James Fisher and meet the fourth Monday at 6:30 p.m. in the Library Media Center.

“I absolutely agree these parent meetings are very important,” said Golding. “And more important as you get older. I know everybody loves to have the bake sales and do all the fundraising when your kids are little. But in today’s world where there is all this going on out there you have to stay involved.” 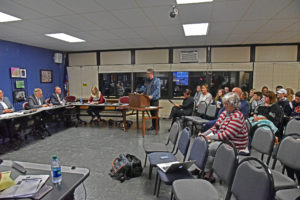 Other speakers addressed the demonization of the small number of students who have been associated with the bullying and violence.

“They’re just kids,” said McMahon. “They all need support and from everyone in the community.”

Golding also said it was important to assist the mothers of students involved in violence and bullying.

“And a lot of these single mothers that have some of these kids that are so troubled,” Golding said. “These single moms with four, five kids they might be working two jobs to put food on the table, keep the rent paid. What are we doing to help those people?”

“So as a community we need to come together, to work on this together and try to get some positive vibes back in this community. It’s just a travesty that’s happened and it’s very sad for me.”

“I just really think we need to work together as a community.”