Mayor’s 2018 budget “holds the line” on taxes; Tylec asks: until after the election? 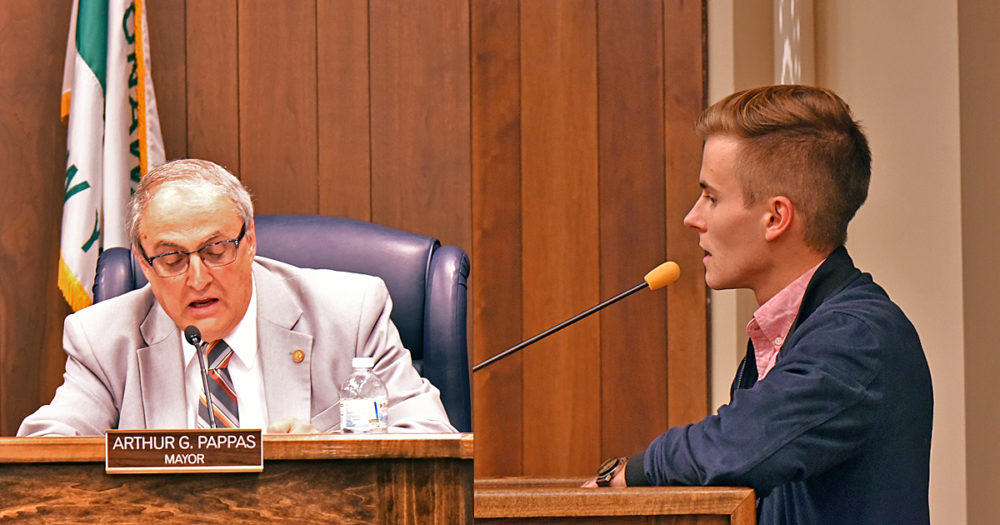 by Joseph KisselOctober 4, 2017
"Who do we trust before an election?" asks Alderman At Large candidate.

Thanks to $1 million from the city’s fund balance, Mayor Arthur Pappas’ 2018 budget sees no increase in property taxes as well as keeping water and sewer rates flat.

“Many tough decisions were made by this administration in producing a fiscally sound budget that is prudent for our residents,” said Pappas. “With that said the general fund appropriations for 2018 are $232,383 less than the 2017 adopted budget.”

However, Alderman At Large candidate Austin Tylec, who recently won the Independence Party primary over appointed sitting councillor Jeffrey Glatz, said he noticed something familiar about this year’s budget message from the mayor.

“While I was sitting here I was looking up past articles, and the one that I found was very similar,” said Tylec during the public comment portion of Tuesday’s common council meeting.

“It sounded similar. Which I imagined you tweaked and so on, which is fine. But on Oct. 18, 2016, the Niagara Gazette wrote from Mia Summerson: ‘No tax increases in North Tonawanda 2017 budget.’”

“So the same thing was said about not increasing the water or property tax. And then after the election something happened. To me that raises questions. Who do we trust before an election?”

“It’s not just you, Art, I understand that. And I know you’re a good guy. But this was the same speech from a previous year and then changed. What did we not know from Oct. 18th to Nov. 16th? That’s less than a month. It just makes you think, that’s all I’m saying.”

Pappas did not respond to Tylec’s comments during the meeting, but did so when asked afterward.

“Once a mayor proposes a budget, it’s presented to the council,” Pappas said.

“The council controls the money. They decide if they are going to go with it or not go with it. That’s how it works. They control the money. I don’t control the money. I propose a budget and they either agree with it or disagree with it after they study it. Once they study it, if they think we are little short or something should be adjusted, they tweak it. We go back and forth on it. It’s not something that I finalize.”

Last year’s tax increase authorized by the council came after they said the budget relied on too much fund balance.

This year, the reliance on fund balance is even greater. However, the mayor said he didn’t know how much remained in reserves and said Reimer could provide that information.

During his budget message Pappas also commented on making $400,000 worth of improvements at the city’s golf course. “Deerfield [sic] Golf Course is a very important revenue generator for our community. In addition, it is a positive quality of life venue for both residents and non-residents.”

After the meeting, however, Pappas could not say how much profit Deerwood Golf Course made during the last fiscal year.

In other news, the council voted unanimously to approve Head Accountant Amanda Reimer’s fund balance policy, which will compel the city to save more and borrow less.

Over five years the city could save $1.5 million, according to Reimer.