by Joseph KisselSeptember 7, 2017
Beyond the controversy over which candidates did not attend and for what reason ... 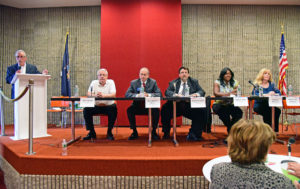 Vince Anello: “Although social media has taken over political discourse, this group (Niagara Community Forum) believes nothing can replace a face-to-face meeting.”

Nick Pelosino: “Our neighborhoods have changed over the years and probably not for the better … I’m from a blue-collar family and I’m proud of that … People want to feel safe in their city.”

James Faso: “Different parts of the city are in a rapid decline, and the number one problem is violence in the city.”

Alan J. Roscetti: “There is potential to be found here instead of moving to Lewiston or the Town of Niagara. I’m committed to being a resident.” 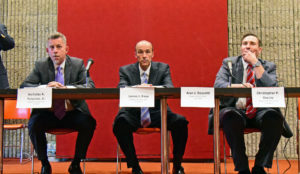 Jeffrey Flach: “Returning to the city in 2014, it was shocking, and I was shocked every day during 2014 … The quality of governance around here is unimpressive … You must have better oversight. Every month or week there are bid-rigging issues.” 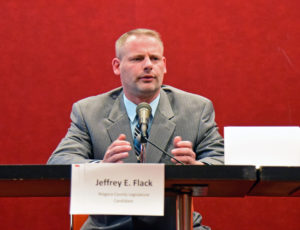 Jeffrey Flach is seeking to be Niagara Falls’ representative in the Niagara County Legislature.

Bob Pascoal: “The enforcement of the nuisance ordinance is a real big problem in Niagara Falls. People aren’t quite so concerned about the major crimes. They are more concerned about what happens to them next door: the constant drug deals that are taking place, the dogs, the lawns not mowed, the trash is not picked up. And it’s just a lot of behavioral things. … We shouldn’t be quite so worried about trying to attract new people to Niagara Falls. The main concern should be to keep the people we have here here. If we can keep the people we have here here it will be a magnet for other people.” 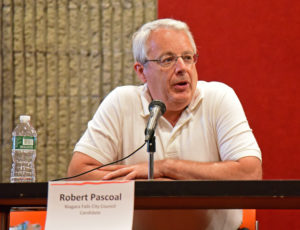 Chris Voccio: “I could have retired anywhere when I did so at age 50 … An outsider’s perspective may just be what this city needs.”

Sam Archie: “$120 million of casino funds was used for budgets, which should have never happened.”

Lakea Perry: “I decided to come here today because if I’m on the city council, I believe I should be able to answer any question that’s asked of me … I passionately love this city, and I want to encourage my son to move back to Niagara Falls.” 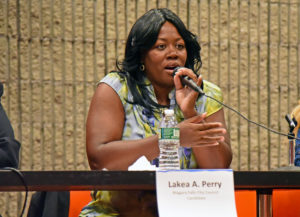 Candra Tomason: “No more reassessments. They are just another form of taxes … Buyers are pulling back from buying houses because the assessments are higher than what they are worth.”

Perry: “We also need to reassess the way tax dollars are spent.”

Pasocal: “We are going to be attractive to Buffalo. As their property values rise, there’s going to be more demand for the property in Niagara Falls … We are overtaxed … Right now we are in a situation where we actually punish people for improving their property. When you put on a new roof, put on siding, windows, a driveway, and then the tax man wants to go out and assess you. We are going to punish you by charging more taxes because you fixed up your property. What it does is it encourages people to keep their property the way that is, and not in a very good state. But It may be beautiful on the inside.”

Perry: “Positions (in city government) were created that shouldn’t have been … We should have a separate contract with the Senecas for the services they use … With the bidding process and change orders and RFPs, there is no documentation where the money is going.”

Archie: “Everybody’s got to tighten their belts in city hall. We can’t depend on the casino funds to bail us out … We should have not been doing that for the day-to-day operations of the city … We need to learn the word ‘no’ … It starts by saying ‘no’ to contractors that come in with a low bid because the majority council is going to give you everything you want.” 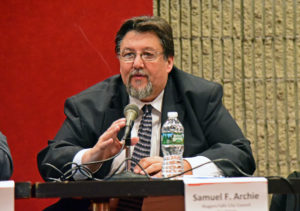 Voccio: “We’re going to need the help of the unions in order to get us out of this hole we’re in … The financial advisory board should never have been disbanded … Consolidation of departments has to be on the table.”

Pascoal: “The council is not fully exercising their powers (in providing financial oversight of the city).”

Archie: “It’s gotten embarrassing we’re number one in crime … Eliminate all the stipends at city hall.”

Perry: “We need to bring back responsibility to the parents to keep crime down … I’m glad to see the parks re-established in the city. There was no park I could go to with my children. And 3rd Street and Old Falls Blvd. are needed to bring people in.” 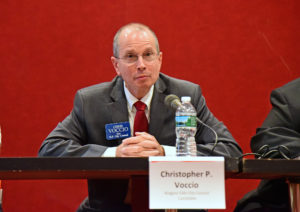 Voccio: “We are not following sound budget practices. Teachers are vitally important to civilization. But I’m not sure they have much experience in the budget process.”

Pascoal: “Our code enforcement has failed us on a number of levels. If you lived in other cities you can see what good code enforcement looks like … And it is a revenue-generating department.”

Anello: “Were any of these questions sneaky?”

Tomason: “I will do whatever it takes to help this city whether I’m in office or out of office … I’m hoping that you see here tonight that it doesn’t matter whether we’re Democrats, Republican, conservatives or independents. But it matters that we are a community and that we work together. ” 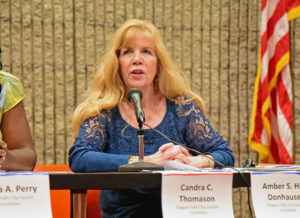 Voccio: “When you go into the general election on Nov. 7th, seriously consider voting differently than you’ve ever voted before.”

Archie: “If you want real change, then we need to elect a new council.”

Perry: “We can only go up from here. I’m a person who listens to both sides.”