NT bullies are “crying for help”; board vows to enact solutions 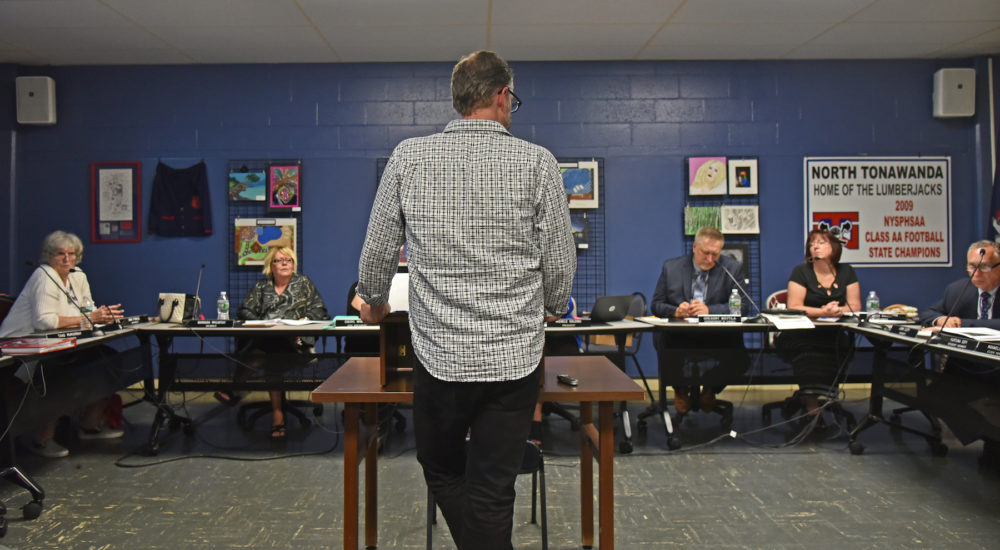 by Joseph KisselJune 8, 2017
Proposals include a school resource officer at the middle school, more social workers and a district-wide no-smartphones policy.

The bullying taking place on-and-off school grounds in North Tonawanda can continue into the night through students’ use of social media.

It’s one reason the NT school board on Wednesday brought up the idea of banning students’ use of smartphones in the schools.

The instant gratification of smartphone use triggers a student’s brain in a way that interferes with learning, one board member said.

“So no other school district does it,” she said. “Let’s be the pioneer.” Another board member said she would enthusiastically support such an endeavor.

That was just one aspect of a wide-ranging discussion brought upon by the gang of middle-school bullies terrorizing students and what school administrators, teachers and parents can do about it.

Another solution included adding a school resource officer, which most likely would need to be funded by a grant.

But the idea getting the most energy in the room was adding more social workers. Currently, there’s only one at the middle school, making it difficult for them to spend any serious amount of time with one student who may need more attention than others.

“I believe those kids who are bullying are crying for help,” said one school official.

“We need to start reaching the kids in the elementary schools.”

One parent who spoke up said their child in elementary school has been the victim of sexual bullying but couldn’t get extra help from the social worker when they needed it.

It can turn good students into ones who struggle and happy kids suddenly sullen.

That parent reported a school official said the incidents were the result of this group of elementary students being “just a sexual class.”

“What’s going to happen to these students in middle school?”

Board members seemed responsive to the parents’ tales of intimidation and violence to their children. Discussion turned to legal consequences for students who assault other students. However, minors who attack other teens or children can only be charged with assault “if they break a bone.”

“90 percent of this would be eradicated if there were 9 or 10 families who got on board and took care of these problems at home.”

A school official countered: “And they need guidance and help. They are children, too.”

UPDATE: Will Crago (above photo), who spoke at Wednesday’s meeting has expressed his desire to get teachers involved in his support group, which not has 350 members.

“As of today, Mr. Woytila (Superintendent of Schools) has not given approval for our flyer to be distributed to them. Please let the teachers know we want them involved. They are an essential part of what we are doing.”