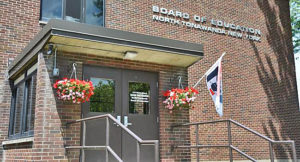 You’ll get a chance Tuesday to meet the candidates and listen to them deliver prepared remarks — although there will be no opportunity to ask them questions during the event.

Appearing will be current one-term school board member Barbara McCarthy, who calls herself the “watchdog” of the current board. McCarthy also has a daughter in 9th grade at the high school.

All of the challengers are graduates of NTHS and have been involved with various programs since.

Zachary Niemiec has held a seat on the high school’s Academy of Business and Finance Advisory Board since his graduation as well as a past seat on the NT Youth Board.

Matthew Kennedy is an active volunteer in the NTHS music and drama departments and uses his background in information technology at Ingram Micro.

Elizabeth Sanderson is a private-school teacher in Erie County as well as a musician.

Bonnie Litten-Schiesley is a health and fitness trainer with two children in the district.

All say they are balancing the needs of the district, students and gaining a better academic reputation to attract new residents to the city as well as the taxpayers who live here and want lower taxes that will help attract more business to locate in NT.

The 2017-18 budget hearing takes places 7 p.m. Tuesday in Spruce School’s auditorium. It is estimated to last 30 minutes. The candidates will then have five minutes each to speak to the gathered audience.

The election takes place noon to 9 p.m. May 16 along with the annual school budget vote.