Appointed to council, Jeffrey Glatz seeks to keep his seat 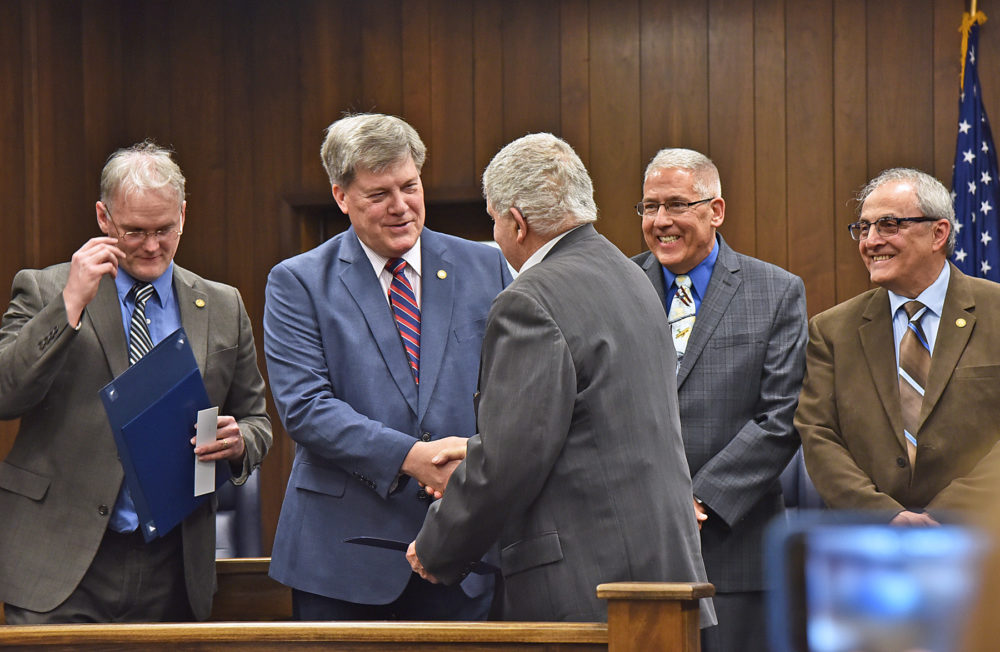 He’s been the county manager of Niagara County, a Lieutenant Colonel in the U.S. Air Force, a county nursing-home administrator and has served on NT’s school board.

Will voters in November recognize Jeffrey Glatz’s seasons of experience and keep him in the at-large council seat he was granted after Katherine Schwandt’s departure?

“As chief of operations for the county, I oversaw public woks, public health, social services, everything,” said Glatz (second from left in above photo).

“I was at the county when the City of North Tonawanda worked out the arrangement to bring police dispatch services there and consolidate them,” Glatz said. “It saved the city from hiring individuals and their retirement health care.”

Glatz called NT’s police dispatch situation “a big issue.” “But they really need to express their concerns to the sheriff,” he said. “The chief of police hasn’t spoken out. To go backward would be a very costly venture.”

In addition to stating his desire to continue serving North Tonawanda in the press release announcing his candidacy, Glatz also broadened his political scope: “I believe that our country is in the midst of a significant change and those communities that embrace these changes will succeed.”

When asked to expand on that he said, “Obviously, we have a new president.”

Glatz will also support veterans’ services as well as senior programs like Meal on Wheels.

As county manager Glatz oversaw its Office for the Aging and its contracted services with North Tonawanda.

On the development front, Glatz said a top priority is making sure the sale of city-owned properties results in benefits to it.

Glatz said he will also continue to support development of new missions for the Niagara Falls Air Force Base as it’s the county’s largest employer and with 121 residents of North Tonawanda working there. (Only Buffalo and Niagara Falls have more residents employed at the base, with 250 and 141 respectively.) “We continue to support and lobby to keep it off the BRAC (Base Realignment and Closure Commission) list.”

Glatz is a registered Independent, switching his affiliation about seven years ago “for personal reasons.”

“There wasn’t one particular thing” he said in regards to his desire to change party affiliation —  although he cited his “conservative nature” as a factor.

Glatz credited the political influence of former NT council president Russ Rizzo (shaking hands with Glatz in above photo). “Russ is an Independent. He and I have similar views.”

So with all that managerial and political experience what’s left for Glatz to do before November?

“What any good candidate will do: Get out there and walk the streets; shake hands with people; make sure they know who I am and my background and experience in government and what I can do for N.T.”

His complete campaign-announcement statement can be read here.