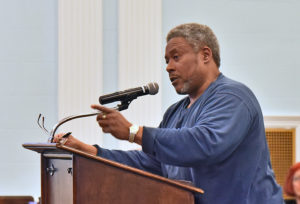 “It hasn’t produced one new passenger. When I went down there for that grand opening that was the most people you’re ever going to see in that terminal. That’s $4 million dollars that you’d like to have back right now.”

“I told you Northstar Development will not build those 42 new homes. It just made no sense. There’s just nothing to support it. The place was all wrong. That’s $4 million gone right there.”

“You guys wanted to pass a resolution that said that you would decrease the speed limit downtown to 25 mph. You sent it to the state. The governor signed off on it. Come back here. I’m telling you can’t pass that resolution because you never defined what downtown Niagara Falls is.”

“Every time I came up here and told you something, it panned out. I don’t know why you don’t listen after 40-some odd years.”

The majority of Hamilton’s remarks, however, focused on a resolution looking to regulate taxi cab and livery service in the city, which he urged the council to hold off on until state-wide rules regarding Uber/Lyft services are expected to be enacted in about three months. (The resolution was, in fact, tabled.)

“The two people who spearheaded this are running for re-election.”