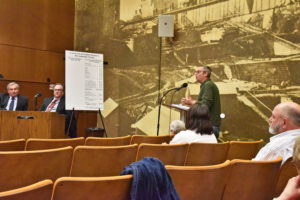 There are several unknowns in the debate surrounding the fire department’s desire to return its own ambulance service to the city.

Primarily, though, the main concern is cost, with opponents citing figures that would require a nine-percent tax increase and proponents saying it would be closer to three percent with the added benefit of returning three more firefighters to fire calls.

Last week, Alderman Joe O’Shaughnessy called for an independent review of the yearly costs. That proposal was sent to the finance committee on Wednesday, but the issue was not brought up.

Instead, Alderman Mark Devine’s resolution to apply for the required “certificate of need’ went down 3-3 when Mayor Anne McCaffrey cast the deciding ‘no’ vote. (Alderman Joe Oates, council president David Wohleben and Rick Abbot voted against the resolution while Anita Mullane, Joe O’Shaughnessy and Devine voted for it.)

New information presented at the Wednesday’s common council meeting included city firefighter Tom Lupo (pictured above at podium) telling the council that the Village of Medina — with its population of 6,000 and similar demographics — will make more than $1 million this year through its ambulance service. As part of McCaffrey’s financial breakdown on the cost of restoring the service, $600,000 is cited as highest yearly amount the city ever took in.

“Rick Abbot said in 2013 we were broke, but it all fell on the fire department,” Lupo said. “We lost 25 percent of our workforce but no other departments were cut.”

Finances aside, Devine’s resolution focused on the the possibility that the City of Lockport will not win its appeal regarding a recent court decision that said the municipality acted illegally when it terminated the ambulance service.

“There was no negotiation,” said Devine. “That’s the way the contracts are written. You have to negotiate.”

“Should the city lose the appeal we need to be prepared to move forward sooner rather than later,” he said. “The potential costs will only grow the longer it’s put off.”

Before the vote, Alderman Oates asked corporation counsel John Ottaviano if there were any legal ramifications to the fire department getting the certificate of need.

Ottaviano said it may “undermine the city’s appeal.” Others, however, said the appeals process does not consider new information or evidence.

Some questioned the mayor’s ambulance-service placard situated between Alderman Abbot and the speaker’s podium since this was not a resolution about restoration of service but securing a license that will prove necessary if the lower court’s decision is upheld and the city is compelled to restore the ambulance service.

In other news, the city will be making sewer line repairs on Davison Road near High Street.

‘The sanitary sewer system is in bad shape there,” said Rolando Moreno, chief engineer for the City of Lockport.

A “cured in place” process will be used to keep costs down, he said.

Additionally, there will be no work session next week due to the Easter holiday.