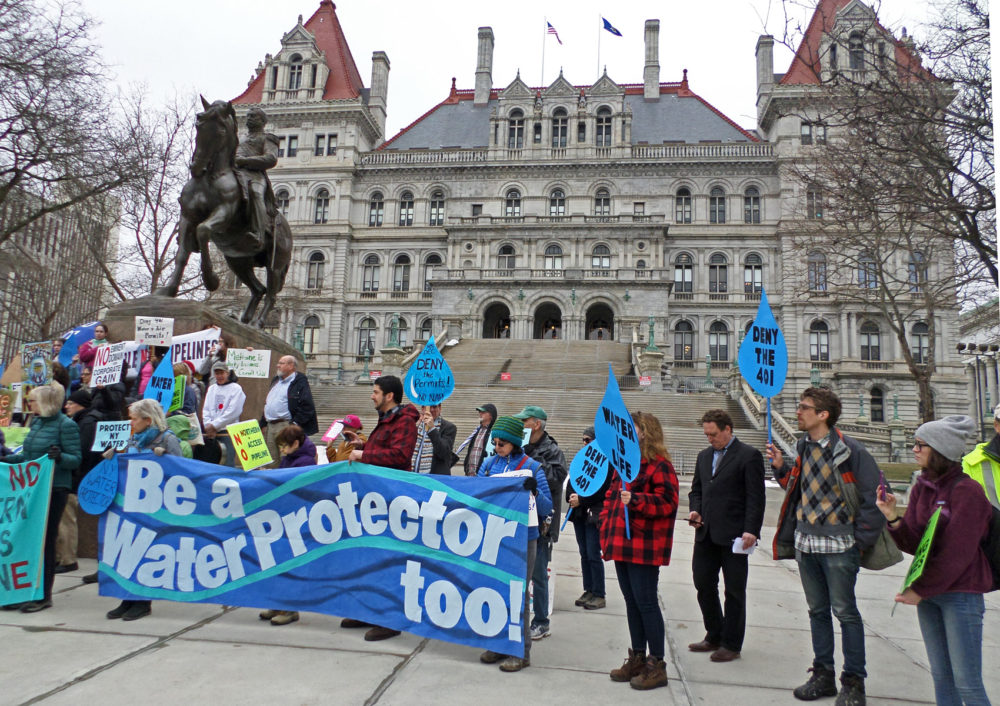 With less than two weeks until the DEC grants or denies “critical” permits for National Fuel’s proposed Northern Access Pipeline, residents from all over Niagara County travelled to Albany on Monday to remind state lawmakers of the environmental risks the 99-mile pipeline represents.

“It’s unbelievable,” says Lia Oprea, whose property is on the planned pipeline route. “My family has owned our land for four generations; we’ve been trout fishing in the area since the 1830s and our land is on the National Historic Register (as the Rider-Hopkins Farm and Olmsted Camp). Now, a multi-billion-dollar corporation wants to endanger our lives and our water so they can make more money. That’s not right. We’re prepared to go to court to protect our working farm, our source of income, our heritage and our quality of life.”

On Feb. 9, the DEC held a forum to hear views from pipeline tradesmen and engineers and National Fuel representatives as well as environmental activists and concerned citizens.

“The Northern Access project would require trenching across 192 streams and 270 wetlands, including New York State-protected trout streams and 13 miles of an aquifer that provides water for thousands of residents,” said Diana Strablow, a member of the Sierra Club Niagara Group. “Fifty miles of the pipeline would go through forested lands. Digging through waterways and clear-cutting trees for the project would threaten cold water fisheries and trout populations, for which the region is known; it could also put several state and federal endangered species at risk, including the dwarf wedgemussel, eastern hellbender salamander, northern harrier and bald eagle.” 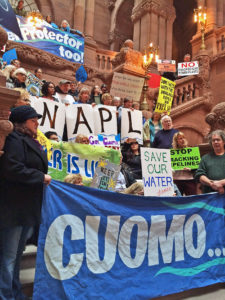 “In April 2016, the DEC denied a key water-quality certificate for the Constitution Pipeline, a gas pipeline that was proposed through the Southern Tier and western Catskills. It would have involved fewer stream and wetland crossings than Northern Access but similar construction methods. The DEC concluded the Constitution Pipeline would have endangered New York water.”

“Western New York deserves the same protection for our water, air and residents,” she said. “There should be no sacrifice zones. We’re asking Governor Cuomo and the DEC to do the right thing and deny the water quality certificate and air permits for this destructive project. Not only do we have a moral obligation to stop enabling fracking in Pennsylvania, we must protect our finite supply of fresh water.”

“Governor Cuomo, in his 2017 State of the State address, said New York ‘must double down by investing in the fight against dirty fossil fuels and fracked gas from neighboring states to achieve the goals outlined in the Governor’s Clean Energy Standard.’ The Northern Access Pipeline would undermine those goals, as well as Cuomo’s plan to cut greenhouse gas emissions.”

“National Fuel has estimated that additional facilities, equipment and pipeline leakage associated with its project would produce almost 140,000 tons per year of CO2-equivalent greenhouse gases. However, when all the gas to be carried in the pipeline is burned, Northern Access would be responsible for tens of millions of tons of greenhouse gas emissions  pumped into the atmosphere every year.”

“Think about your kids,” says Strablow. “We need to transition to renewables—for energy and job creation—not use our state as a thruway for fossil fuels that hurt people and the climate.”

“The project would also mean a large new compressor station and two miles of adjacent pipeline in Pendleton, NY, a ten-fold compressor-station expansion in Elma, NY, and a dehydration facility in the town of Wheatfield—all in residential areas.”

“Compressor stations are what push gas through these high-pressure pipelines,” says Joseph Gibson, a Western New York resident and organizer with Clean Air Council. “They’re also extremely toxic. They constantly emit carcinogenic VOCs [volatile organic compounds], carbon monoxide, smog-forming gases, and other pollutants. You don’t want your family living near these pipelines, and especially not near these facilities.”

“The Federal Energy Regulatory Commission, the agency that oversees interstate natural gas pipelines, dismissed landowner objections and issued its final approval, a Certificate of Public Convenience and Necessity, in February. That allows National Fuel to petition a federal judge for eminent domain condemnation of properties whose owners have refused to sign contracts. Proceedings are expected to be scheduled in the next few weeks. According to Gibson, National Fuel attorneys will likely ask for “quick take” condemnation, allowing them to build the pipeline before compensating landowners who have not given consent, a direct violation of the fifth amendment of the Constitution. Many landowners have likewise cried foul since the gas is not intended for local use, making this a matter of private profit rather than public need.” 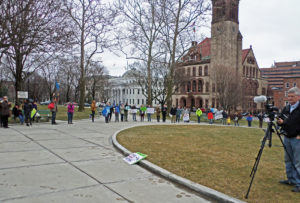 In other news, The Public Accountability Initiative released a report looking into the “forces pushing the Northern Access Pipeline and the interests that would benefit from its construction.”

The report’s “Key Findings” include:

“Revolving door lobbyists. National Fuel has hired two former Cuomo environmental attorneys – Robert Rosenthal, Cuomo’s former assistant counsel for energy and environment, and Steven Russo, former deputy commissioner at the Department of Environmental Conservation – to lobby for the Northern Access Pipeline,” says the report. “The DEC is the agency now deliberating on whether to issue water quality permits for the project. Other pipeline lobbyists include former State Senator George Maziarz, who resigned suddenly in 2016 amid a campaign finance investigation, and Samantha Diliberti, who represented Cuomo in the Hudson Valley.”

“Backed by global capital and regional banks. National Fuel has a $1.25 billion credit facility with a syndicate of banks. The largest lenders are large global banks such as HSBC, Wells Fargo, and Bank of America. Smaller regional banks such as Buffalo’s M&T Bank and Pittsburgh’s PNC Bank are also financing the gas company.”

“Executives earn more in less than two weeks than average family does in a year. National “Fuel’s top executives earned $17.2 million in 2016. Each earned more than the median household income for an Erie County, NY family in less than two weeks. National Fuel CEO “Ronald Tanski was paid $7.2 million in 2016; this means he made more in two days than the average family in his service area earned in a year.”

“$1.2 billion in dividend payouts come from home heating monopoly. National Fuel has increased its dividend payout to shareholders for 46 years running, supported by cash generated by its natural gas utility, which has an effective monopoly on home heating in the Buffalo, NY region. National Fuel is currently asking the New York State Public Service Commission to hike rates for Buffalo-area customers to generate an additional $41.7 million per year in revenue. Since the last time National Fuel hiked rates, it has paid out $1.2 billion in dividends.”

The full report is found here … 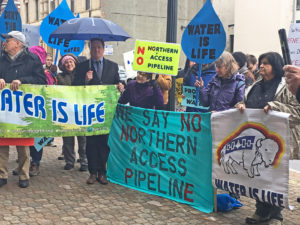