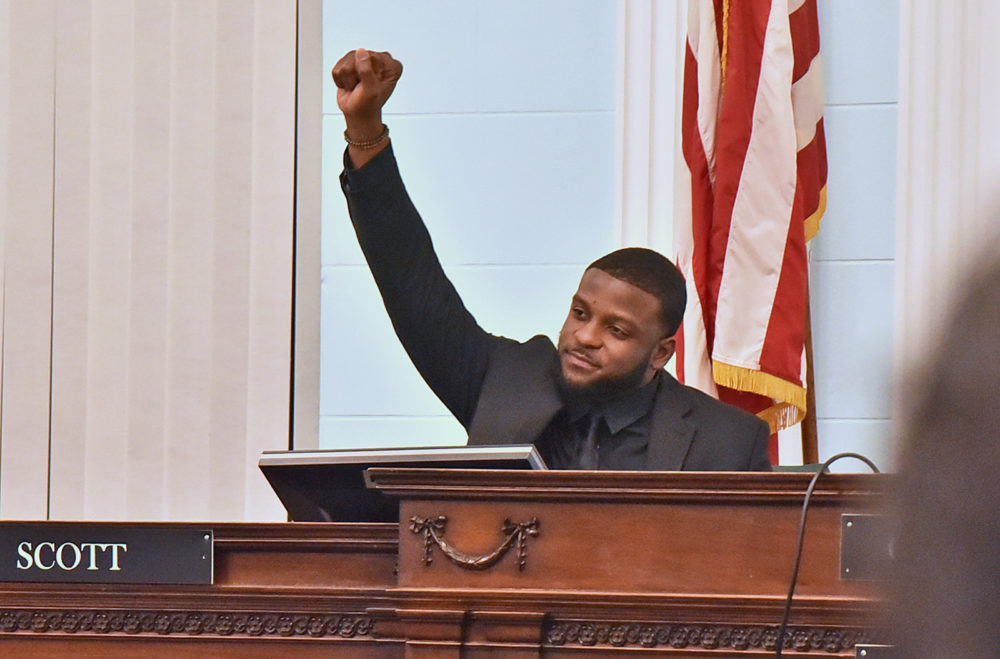 “You probably didn’t pay much attention to me during the reciting of the Pledge of Allegiance,” said Niagara Falls councilman Ezra Scott Jr. during Monday’s meeting.

“With the traditional placement of my hand over my heart, why would you notice?  Nevertheless, if this were a different time and a different place, I would have recited the Pledge with a raised clenched fist.  Let me explain.”

“I believe that all actions should be made with intent, and for a reason, rather than in vain.”

“The raised fist salute dates back to ancient Assyria as a symbol in the face of violence. It’s also been a symbol of solidarity and support in other societies and used to express unity, strength, defiance or resistance in others. In a letter dating back to the Spanish Civil War we also learned the ‘ … the raised fist which greets you in salute is not just a gesture—it means life and liberty being fought for and a greeting of solidarity with democracy.’ Many groups, from the Albanian National Liberation Front to the Zimbabwe African National Union have used the raised fist salute as a symbol of solidarity.”

“In the 1960s the Black Panther Party used the raised fist along with the universal slogan “Power To The People” as a gesture to represent the struggle for Civil Rights.” 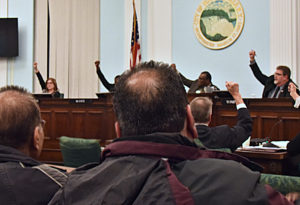 The Niagara Falls City Council raises a fist along with councilman Scott.

“In the 1968 Summer Olympics in Mexico City, medal winners John Carlos and Tommie Smith gave the raised fist salute during the American National Anthem as a sign of Black Power and as a protest on behalf of the Olympic Project for Human Rights. Tommie Smith is quoted in his autobiography as saying his ‘Silent Gesture’ was not a Black Power salute, but, in fact, a human rights salute. Today, the official International Olympics Committee website states ‘Over and above winning medals, the black American athletes made names for themselves by an act of racial protest.'”

“When South African Human Rights activist Nelson Mandela was released from prison in 1990 after 27 years, he and his wife Winnie both raised their fist in triumph over South African apartheid.”

“Vermont Senator Bernie Sanders has used the symbol on the Presidential campaign trail while running for the Democratic Party’s nomination. Senator Sanders has responded as he shows his fist encouraging people to ‘fight the good fight.'”

“I overcame the criticism and weathered many storms to make it to this point through the grace of God, a strong family unit and the support of those who believe in me. My slogan during that election was and continues to be “A connected city is a protected city.”

“In order to move forward as a city all of us must be willing to connect and protect our common interests; our families, communities, resources and institutions. This requires us to learn more about each other, challenge prejudices that divide us and take ownership of the destiny of our beautiful city. I raise my fist in solidarity with all of the citizens throughout this country, regardless of their color, nationality, religion or gender.”

“Those citizens who are standing up for their rights and those who cannot stand, I AM because WE ARE and all power is still to the people.  As one who was awarded the Nobel Peace Prize and the Presidential Medal of Freedom, Archbishop Desmond Tutu proudly proclaimed:  My humanity is bound up in yours, for we can only be human together.”

“In reflecting on the meaning of Black History Month, I would ask that we all raise our fists in celebration of our common humanity. Thank you.”