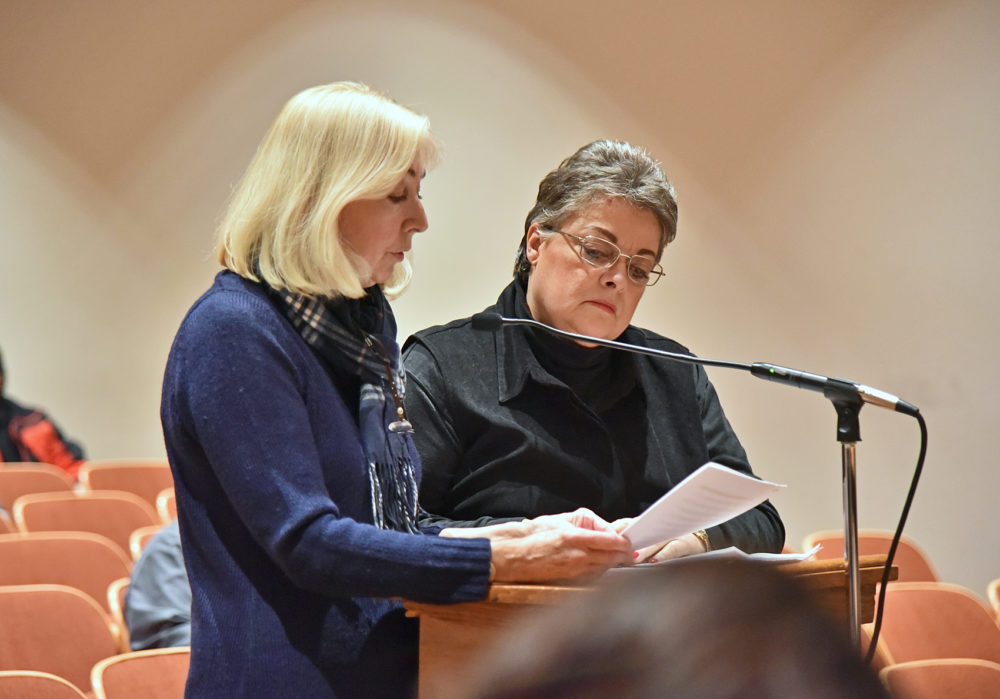 Last week, Wheatfield residents Deborah Fadel (above left) and Laurie Galbo (above right) spoke at length in front of the town board, asking new questions and expressing the concerns of their neighbors about several safety issues facing the town.

“Tonight we are here again to present another message to the town board members,” Fadel said.

“Our words ‘Seeking Out Safety’ for the Town of Wheatfield residents represents an S.O.S. message that is shared by our community,” she said.

“We have been told by Mr. Cliffe and other members of the board that they do not support sidewalks in our town. Yet if you read on the Town of Wheatfield’s website you will find that the Town’s Comprehensive Master Plan includes pedestrian walk ways, sidewalks, and bike paths. In 2015 after we presented our safety concerns about widening road shoulders or providing a sidewalk to the Wheatfield Board Members, Mr. Cliffe stated to Kelly Dueger and I, ‘Now you have created a problem in Wheatfield.’” Kelly Dueger replied, ‘No, we are addressing an existing problem in Wheatfield.’”

“We know that Krueger Road is not the only unsafe road in Wheatfield and that is why we need to take a stand and share with our town board members that safety is important for all Wheatfield residents. We need support from the Wheatfield Town Board to seek out money and grants to address unsafe road conditions.”

“The Town of Niagara is also pursuing money from the Transportation Alternative Program for a sidewalk along Fourth Street due to a pedestrian fatality. They did not need to have residents sign petitions or provide pictures for this. They just did it. They also will be taking their matching 20 percent out of town funds. Why? Because they feel this particular road is dangerous and requires a sidewalk to keep residents safe,” Fadel said.

“Wheatfield Town Board Members need to recognize they are elected officials. Their first priority should be to provide a safe environment whereby the residents can enjoy the parks, playgrounds, and recreation buildings by providing roads with shoulders or roads with sidewalks,” she said. 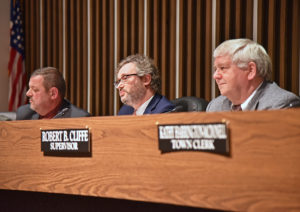 Town Supervisor Robert Cliffe: “Essentially, I agree with you. But it all comes down to whether or not we get a grant. Whatever other action we are going to take it has to start with or without that grant. And that grant isn’t going to be answered until whatever Bernie said.”

Fadel: “Bernie Rotella told us maybe the end of January or February. Matthew Brooks told we have a few weeks to hold  a town meeting to see if we can get that other money.”

Cliffe: “Once we have that then the other decisions start. Whether or not the town board is pay for it or whether the town board is going to ask the people of the area to pay some of the money toward that still has to be decided. Once we are approved for a grant. It’s still going to take six or eight weeks before we get a contract back and forth. We’ve been through these discussions. Nobody is fighting the project at this point. It all comes down to that the whole process doesn’t even start until we find out whether we are going to get the grant.”

Fadel: “I remember (Town Board member) Mr. (Gilbert) Doucet  saying, ‘People do not want sidewalks on your street.’ And he even said … ”

Doucet: “I correct you on that. What I said is that I hate to put the burden on the residents. I have nothing against sidewalks. I just hate to see the residents on Krueger Road and the area have to pay the tax on it.”

Fadel: I would have been happy with shoulders.

She comments that the Town of Wheatfield’s parks are beautiful and director Mike Ranali does a wonderful job.

“But too bad our kids can’t get there because there’s no shoulders on the roads to get there,” she said. “Any of the roads.”

“Mr. Cliffe, I was appalled at your response to Mr. Telvock in the Jan 10th Investigative Post interview,” she said. “You felt the fence at the Nash Rd. Landfill was not an emergency. That the cost of the fence is a taxpayer burden. Yet we, the taxpayers will be strapped with litigation for years to come. I requested the fence installation to this Town Board from September 2016 thru Feb 2016 when Senator Ortt offered $75,000 toward the cost of the fence. You dismissed me with every request. The fence and the landfill clean-up is an emergency. Every town board since 1968, has known of this toxic landfill. Every town board has ignored DEC recommendations since the 1980s,” said Galbo.

“Mr. Cliffe, you once stated to me that you were not here in 1968. You are here now. 28 months after the DEC informational session, you are still not doing anything further for the clean up of the landfill or moving fast enough for the fence.”

“Based on my observations, this Town Board has no tolerance for concerns of residents. This board does not represent the people of this town. In my opinion, this town board is concerned only for your deep pockets and self interests.”

“This is an emergency now to all of us. This is your mess now. The decisions of this board have proven time after time to be careless and irresponsible Even when Forbes St residents attended  previous town board meetings, you, Mr. Cliffe, dismissed them and belittled them,” Galbo said.

“This board is ineffective, irresponsible and careless. Your lack of concern and action, the lawsuits now being initiated, are a disgrace to every one of you. You have failed every town resident. Every one of you has to live with the consequences of your decisions. They are on your conscience forever.”

Cliffe: “As you are probably aware, and I have be very careful of what I say because of the lawsuit, the landfill site — although the property belongs to Wheatfield — it’s under the control of the Department of Environmental Conservation and has been so since the 1980s. We can’t go in there and do anything without their permission.”

“The fence is one of the things we have permission to proceed with. It was actually recommended to the DEC — not the town — that the DEC in 1985 for the very first time and again in 89. The DEC controls the site but they have given us permission to put up the fence, which was requested by Mr. Ortt and he came with a check in hand.”

“Unfortunately, it’s a grant. It has to go through the same grant process that the other grants go through. He basically guaranteed that we will eventually get the money, but we do have to get it approved to start the work. And it won’t be approved now for another one or two or three more months.”

“They will send us the contract. We will approve it here. Sign the contracts. Send it back to them and they will have to approve that. And once they do that we are prepared to proceed. We could take the chance and jump the gun and go ahead and order the design and order the bid specs to be written. We could even have bids placed by special workers. That’s what we could do spending very little additional money.”

“We can’t proceed or do any construction until we actually have the grants approved. If I’m wrong I’m very sorry, but that’s my understanding. Bernie is the expert on that, and that’s what we’ve been told,” Cliffe said.

“There’s nothing I would love more than to put this fence up. We have put signs up. No Trespassing signs. Twelve signs up. They were torn down within a week. We put another 12 signs up and many of them were torn down but not all of them. Today was a pretty good day and we went out and put another dozen signs or so up today. Basically they state ‘no trespassing.’ That’s our responsibility. The DEC still doesn’t believe a fence is necessary. It’s going to get in their way when the cleanup of that landfill actually occurs. That’s another process that’s being worked on as we speak. But not by us. It will be worked by the DEC. The DEC will make the decision as to what still needs to be tested, what still needs to be approved for work, and we will be one of several parties that will end up  having to pay for that including some Superfund money. We are a long way away from that happening. (Town Attorney) Matt (Brooks) is working with a group of attorneys along with the DEC to take the next step. The fence is a state issue. This board could proceed with a partial part of the process but we can’t proceed with the work until we receive approval.”

Galbo: Did any of these processes start when you came into office or only started back in 2014 when it became public knowledge?

Cliffe: I didn’t even know that the landfill existed as a landfill until 2013 when the DEC asked for permission.

Galbo: “We built our house where we did to be as far away from Love Canal as possible. And now to find out all you have to do is walk through my backyard and I’m in the dump.”

“I understand things need to take place,” she said. “But things need to move along. You have people who have already died on Forbes. You have people who have moved out of that one house on Nash twice now just in the last two years. And as far as I’m concerned my street and Richelle should never have been allowed to be built. This was in 1988 and their recommendations starting coming out in 1985.”

“Not to mention the DEC agent at the informational session. I asked him two questions. If the groundwater was contaminated. He looked me right in the eye and said, ‘No.’ But we now know that’s not true. The groundwater is contaminated. I asked him which direction that garbage was moving in. And he said everything on an angle toward the Boulevard. We now know that’s not true. It is spreading in every direction.”

“We are in the process of getting our property tested because right now I don’t feel safe in this town. Between Quasar and the dehydrator and a Love Canal dump everybody has known about since 1968, and you want houses to be constantly built. You allowed five or six houses on Shawnee last year and Mr. Doucet even brought up at the town board there was Love Canal waste buried 150 to 200 feet from one of those houses.”

“You keep building everywhere that you shouldn’t be building.”

“You have radioactive hot spots on Nash Road. People are driving over that. There’s all this dirt across the road. You drive over it. You walk over it. You bring it into your own house.”

“I just don’t understand if everybody knew about this beforehand why didn’t you know from the time you came into office? As far as I’m concerned everybody since the 1980s has failed us,” said Galbo. “People are dying.”

“We can’t sell our house now. As as of Thursday our house plummeted in value. Who’s going to be able to sell? We’re stuck.”