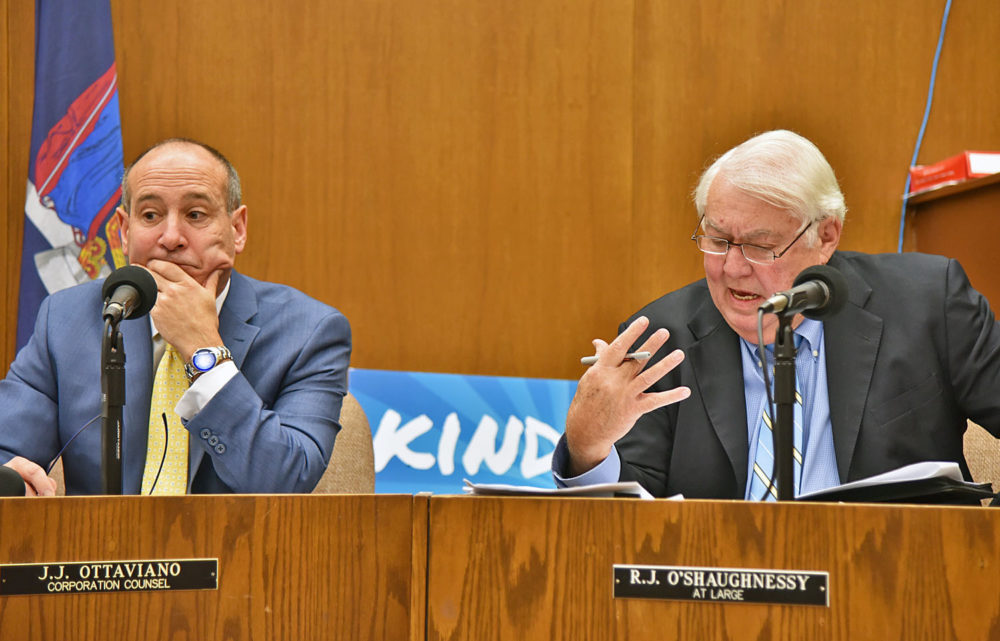 by Joseph KisselNovember 17, 2016
"It's less expensive to mediate than to litigate," says Alderman Joe Oates.

As residents tell Twin City horror stories and Alderman Joe O’Shaughnessy says returning the ambulance service to Lockport’s firefighting heroes is the only way the city can generate new revenue, the council voted 3-2 against his proposal to compel the city attorney to drop a planned appeal.

“I prosecute and defend measures as I see fit,” said Lockport’s Corporation Counsel John Ottaviano. “I would consider it malpractice to not appeal.”

Ottaviano said it’s not in the city’s best interest to let stand the PERB ruling that says Lockport cannot shut down its ambulance service unless it gains the consent of the fire department.

Although he said the city council was “his boss,” according to Ottaviano, the city charter gives the council power only to set budgets and not to direct his office.

Members who voted against the resolution — Joe Oates, David Wohleben and Rick Abbot with an abstention from Mark Devine who cited a conflict of interest— said that to not file an appeal, which is an irrevocable event, denied the city an important tool during the bargaining process.

“What’s best for the citizens isn’t necessarily best for the unions,” Wohleben said. “I think some of our contracts have not been done right in the past.”

What seemed indisputable is the high regard in which the community holds the Lockport Fire Department.

“I don’t think you understand the safety and confidence you feel when somebody comes to your house and they know you,” said Shirley Nicholas, recounting a time she needed 911 help from the LFD. “It’s just me and my husband and no family, and on my next birthday I’ll be 80,” she said, adding that she believes she was one of the last residents to get LFD ambulance service before the city pulled the plug.

“These guys know all the streets in Lockport,” said resident Russell Bruning. “They do a great job and they’ve always done a great job.”

Resident Sue Wienke said she experienced an “unpleasant ride” with Twin City Ambulance to the Lockport Hospital, which was only five blocks away yet the driver didn’t know how to get there, she said.

That was O’Shaughnessy’s point as well.

“Why did Twin City come here? To make money. But how can two ambulances serve both the city and the town?”

O’Shaughnessy said the previous ambulance service was not managed professionally and services were priced too low.

Alderwoman Anita Mullane said the city council should take the lead on negotiating with the fire union as well as the other three unions the city has no contract with.

Mayor Anne McCaffrey said the city is negotiating actively with their unions and Wohleben said while there’s no quick end in sight to the negotiations, he’s optimistic in general.

“We have made some great progress and we’ve gotten rid of some grievances,” he said.

“I do believe that once the mayor puts her group together and we will sit and down and we will negotiate and we will come up with a resolution.”

O’Shaughnessy said it was about something more, though.

“We are talking about values of life,” he said. “How long does it take to decide what’s right and wrong for our community?”

The city has still not disclosed how much it has spent on outside counsel appealing the fire union’s lawsuit against the city to reinstate its ambulance service.

Finance Director Scott Schrader and Treasurer Sue Mawhiney are working on gathering the numbers spanning several years, according to Mullane.