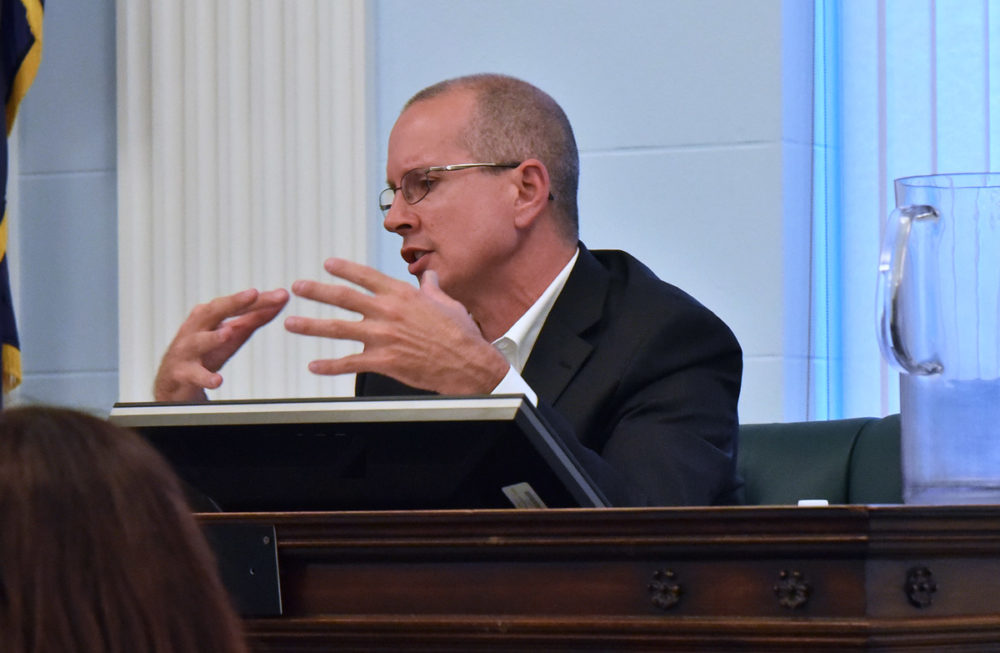 It doesn’t mean anything.

Or does it mean everything?

The city’s public workforce got a strong show of support from the Dyster administration as well as the Andrew Touma-led city council on Wednesday last week when it passed a resolution “expressing its grave concerns regarding the Janus case and its outcome for our economy and our workforce.”

Although the resolution doesn’t call for any specific action by the administration or council — as the city tries to craft a 2019 budget under a loss of $13 million dollars and previous budgets substantially propped up by casino dollars intended for economic development — it still prompted one councilman to raise concerns.

Councilman Chris Voccio says he’s gotten good feedback from constituents regarding his opposition to the resolution, and he also wrote on his Facebook page he does not expect to be re-elected because of it.

In the union-strong, “friends-and-family” atmosphere of Niagara Falls, N.Y., anything less than 100 percent support of the public unions seems tantamount to political suicide.

Just prior to voting on the resolution — which Touma, Ezra Scott Jr., Bill Kennedy and Kenny Tompkins supported — each councilman made comments.

Voccio started off the discussion.

Voccio: “I love unions. I love union leaders and union members and the rest of it. But I have real concerns about this resolution. To me, the normal labor-relations arrangement is that on one side is labor represented by labor union leaders, negotiators and attorneys they pay through their dues. And on the other is the company. And in a private sector company, management would be someone like me, a newspaper publisher, and I have an attorney or I might have some negotiator from our corporate office to help me with it.”

“But the two sides would meet together for contract negotiations. We had to amend the agreement with something that came up, there was a dispute. The two sides hopefully in good faith hash out a deal and a deal was done wether that be a contract or whatever.

And in a municipality — and I recognize I’m new to this but I’m not totally naive — to me the arrangement is we have employees who belong to collective bargaining agreements, which is terrific and I love them and they’re fantastic. But they are represented by labor-union leaders who also have negotiators and attorneys. On the other side, on management is … who? It’s us. It’s the administration. This is fraught with complexity. There are campaign contributions here. When I was with the Niagara Gazette the head of the teamsters represented our pressmen (and they (and they would have their union representatives working for them.)”

“And so I guess my concern is we’re going into this budget situation and I’m going to be on the side of expense, solving our problem through expenses. My concern is will we be somewhat less prone to that when 80 percent of our expenses are employees if we literally turn the tables on the negotiations and say we are going to come around from that side because we’re with you, we are supportive of you, we are upset at this Janus decision.”

“And what makes it even more complex is this Janus decision is not going to affect for the most part labor unions and negotiations and their employees and collective bargaining. It’s going to affect political contributions. Who’s voting on this resolution? It looks like campaign contributions would be directly affected in a small way in Niagara Falls. I looked at the numbers and it’s going to be small but somewhat affected from Janus. I know which way it’s going to go. But I plead with my colleagues before we go through the votes just think about what I said and the implications of our vote.” 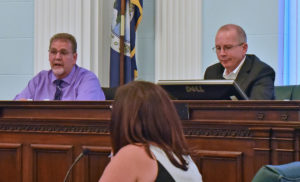 Tompkins (above left): “I think you’re looking at it a little bit differently. To me Janus is an attack on the unions itself. When it comes to budget time, when it comes to money we don’t look at union, non-union issues, we look at dollars. And what has to be cut has to be cut. It’s not a matter of the union issue. We are not attacking the unions. If we lay off a gentlemen that’s in the union we are not attacking the union as a whole — which Janus in a sense is — we’re eliminating a position that we feel is no longer necessary. And there’s a very strong line between that. To me, the Janus decision is being able to support unions and union rights. It has nothing to do with the budget and taking care of the taxpayers’ budget.”

Voccio (above right): Well, I hope that’s the case.

Touma: Over a million.

Touma: Three of us were a part of that. But let’s go back to your first comment. You want to draw the line as far as management and union. And I know you’re for this Janus decision. I understand that. All I’m saying is that in order for a city like Niagara Falls or any city for that matter to be successful you need to have a working relationship with your unions and union leadership.

Touma: “So, if you support the Janus decision then I think what in essence what we’re saying is we’re turning our backs on our union leadership and our unions and saying it doesn’t really matter what decisions come down federally even though they may hurt you or hurt your collective bargaining. What I’m saying is it’s not black and white. I’ve seen successful negotiations because the people worked with the union leadership and they developed a relationship. What you’re saying is, you know, it’s got to be you’re on this side and we’re on this side. I think differently. And I think that if I have a relationship with the unions and they know they have our support, we are working together, hopefully they are willing to concede or to make some changes so we can get through the next two budgets and beyond. If they see us as not supportive of decisions that come down federally, I think that breaks down our relationship and it weakens the city as a whole. I think a lot of these folks that we’re supporting today, that impacts today, they live in our city, they work in our city, their children go to our schools. They spend their money here. All we’re saying is we understand this is an attack, in my opinion, an attack on unions publicly and what’s next? An attack on unions privately. So we know that what we did today by not supporting the Janus decision is saying, in a grassroots effort, that we need to rally for the unions and to work together.”

“You can talk about contributions and other things. That’s just a matter of fact. And that’s going to happen no matter what. I think contributions come from people that they feel, they believe in their leadership and they are going to make the right decisions. And they trust in that you’re going to be fair. And that’s all you can ask from an elected official is to be fair. If you’re going to be black and white, councilman, we’re management, you’re union, you do your job and we’ll do ours and we’ll cut where we have to … I just think that brings dissension and rifts between the two sides. And the ones that have it together, the ones who work together … And by the way, I don’t see us as management. They’re management (motions toward Dyster and City Administrator Nick Melson). We’re elected officials to support our citizens. We feel, the majority of us feel, I can’t speak for everyone here, we feel that this particular decision has hurt our body, our residents, our citizens of this city. And that’s the bottom line.”

Ezra Scott Jr.: “I want to make it clear I support the resolution. I recently studied and learned about the difference between private sector and public sector unions. I’ve learned how the Governors of both New Jersey and Wisconsin both pushed legislation for union reform due to the fact that both states were barely able to cover their yearly expenses but still had to pay out expenses to public sector employees currently working and retired to cover their health care and other contractual agreements. You can find situations where some public unions do take advantage of the fact that they can endorse and contribute campaign funds to candidates who eventually vote on their contracts that may be in the best interest of unions but not always the best interest of the tax payers. I do support this resolution because I support unions and believe unions are a critical tool to protect employees from unfair treatment but the discussion of some form of creating a way that assures that union reps that are negotiating contracts with elected officials do have the best interest of not only their employee membership but also the taxpayers that these contracts can impact.”

Kennedy: “I represent the city of Niagara Falls. Unions are here. It’s what we do, and I’m not going to get into back and forth. I respect everyone’s views and opinions. It’s a resolution. If you like it, vote yes. If you don’t, vote no. Let’s move on.” 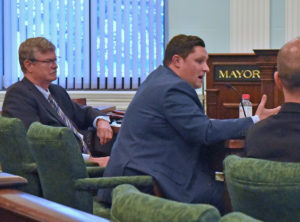 Melson (above center): “As representing management here, you have to separate the two. And councilman it was a journalist, a newspaperman, Upton Sinclair, that kicked off the American labor movement. And the way we deal with our unions we have to do first what’s best for the City of Niagara Falls and the taxpayers. But this Janus decision was an attack by one political group on the American labor movement. And I think what the council was trying to accomplish here, I applaud you for standing up and saying this isn’t right. It was done wrong and it’s a massive mistake. We need to separate the two issues. Just because I’m the proud son of labor, grandson of labor and great-grandson of labor, organized labor. But that doesn’t mean I won’t do what’s right during contract negotiations and having done what’s right during contract negotiations. “