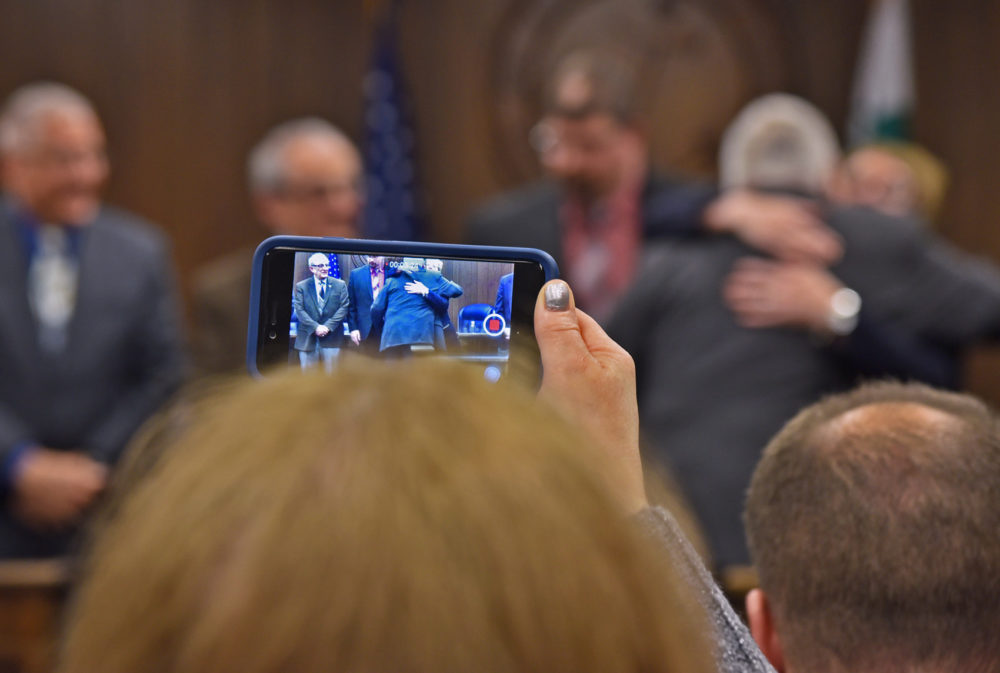 Proclamations were read for both recognizing their many years of service on the North Tonawanda Common Council, and Rizzo and Schwandt offered remarks as well.

State Senator Rob Ortt was on hand and Rizzo’s remarks centered on his first encounter with the “dynamic young senator.”

“This kid told me his view of North Tonawanda, and how it should be,” said Rizzo. “He sold me right away.”

“He has brought North Tonawanda on a steady rise,” he said.

Rizzo also mentioned former County Legislature Chairman Bill Ross as the man who got him into politics.

“He’s like doctors used to be,” said Mayor Art Pappas. “He made house calls. Sometimes he went to them before they went to him. If he got a message, he always answered it.”

Rizzo also made special mention of former State Senator George Maziarz, and Rizzo’s wife Mary. “She spent many nights alone as I attended functions. I never could have lasted 17 years without you.”

“Thanks to everyone for putting their faith in me. When I first got sick I got cards from people I didn’t even think liked me, and they sent me prayers. And that’s what has gotten me through this.”

Council President Eric Zadzilka said, ‘We will model ourselves in a lot of ways on how you did it.”

Rizzo was also known in the city for his Rizzo & Ricotta office products supply company.

He also mentioned the multi-million dollar restaurant and marina project as “another jewel of the 1st Ward.” (a phrase Rizzo loves to say).

Rizzo supported the building of Wal-Mart and helped get new vehicles for the police and auxiliary police, Ortt said.

Schwandt was also given accolades for being a “tireless servant” with her many 15+ years of service on the council. “She epitomizes the value of hard work and dedication,” said Zadzilka.

Schwandt moved to North Tonawanda in 1989 and was instrumental in getting kayak launches and bike paths in the city as well as getting funds for playgrounds.

Schwandt and Rizzo were each presented with a key to the city.

“We really worked well together and it was a successful experience,” Pappas said.

Appointed board member Mark Berube said he saw Rizzo at every Bills game for the past 15 years.

“I hope to continue to serve the council as long as they have,” Braun said.

In other news, a resident asked the city council to consider a 10 p.m. outdoor music curfew. The resident complained of incessantly loud music coming from Crazy Jake’s downtown and its negative impact on his health.

Zadzilka said the council would look into the matter. 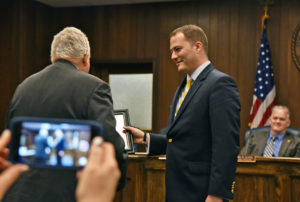 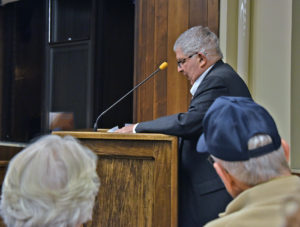 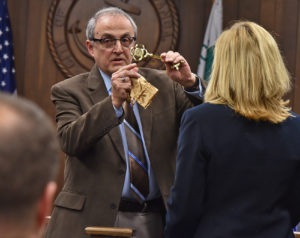 Mayor Pappas gives Schwandt a key to the city. 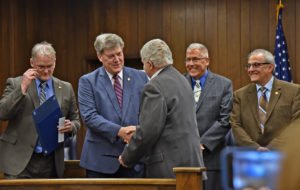