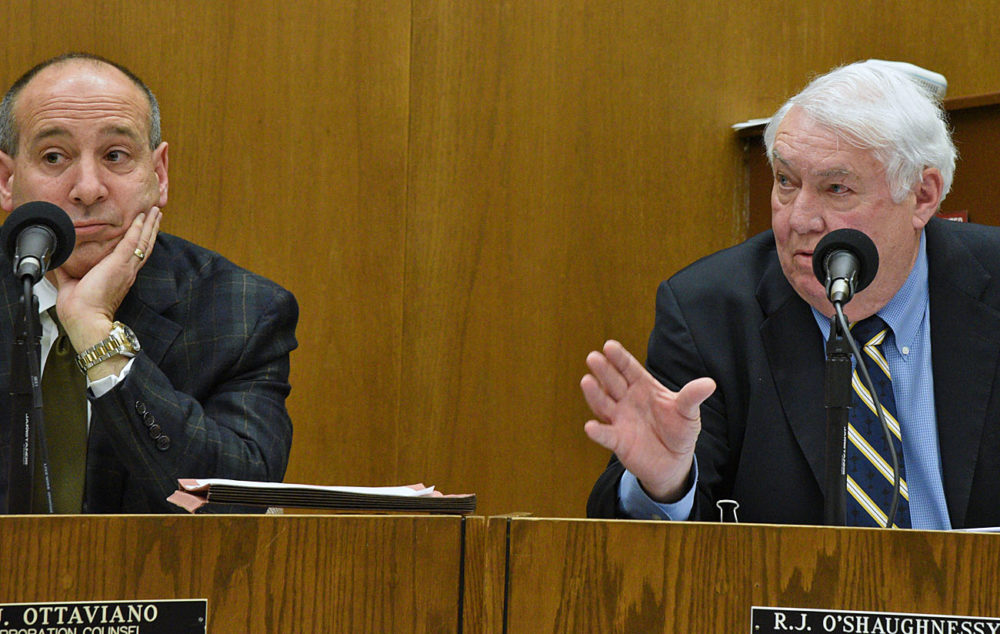 LOCKPORT — A resolution requiring council notification of any departmental “encumbrance” of more than $10,000 was voted down Wednesday at Lockport’s Common Council meeting.

An encumbrance is setting aside money in a department’s budget for anticipated expenditures, which is different from transferring money from one department — or budget line — to another.

The resolution, sponsored by Alderman Joe O’Shaughnessy, arose from Corporation Counsel John Ottaviano’s “encumbrance” — or putting aside $50,000 in the budget — several months ago to pay for an anticipated legal expenditure resulting from an ongoing legal case.

“You can amend the budget at any time via resolution,” said City Clerk Richelle Pasceri. “So at any point, and in fact you’ve (the council) amended it a few times, and you were going to the legal line. The council was amending the budget, and going to the legal line. John saw that line, joined the links, saw that there were bills coming up. So he encumbered that money so it could not be taken to pay another bill via resolution.”

Mullane responded: “But it was $50,000. I think we have a right to know about it. I found out about it accidentally. I can honestly say we’re in charge of the people’s money. We’re trying to look out for the people’s money. And we, with all due respect, we do ask you for legal advice. But in the end aren’t the resolutions on us?”

“Yes,” Ottaviano responded. “I could write this better if you gave me a week to work on it.”

Mayor Anne McCaffrey followed: “I would like Finance Director Scott Schrader to speak on this. The entire council needs to be informed on what this resolution means.”

Schrader: “So the issue is encumbrance and the difficulty is the term encumbrance. An encumbrance is a promise to pay. You are setting money aside for a specific purpose. A purchase order is an encumbrance. So if this is adopted as it is currently written any purchase over $10,000 will have to have city council approval before we can do it. So any request for any materials, any fuel, paving, any purchase order over $10,000 will have to be approved by the city council before we can do it.”

Mullane: “But doesn’t everyone know ahead of time with that kind of money what you’re spending?”

Schrader: “No. So I did a quick review of our budget. There are over 75 instances of when our budget has spending over $10,000. So in essence you will have a minimum of 75 resolutions to approve with this resolution.”

O’Shaughnessy: “This whole thing came about because this money was withheld, a burden of obligation, an encumbrance. But we did not have any bill from Mr. Goldberg. It was held in lieu of maybe we will have a bill. That’s what this is all being addressed about. There is not a bill that existed although it was being withheld. And yet $50,000 was withheld. That to me is wrong.”

Schrader: “But if you pass this resolution you will inhibit our ability to buy goods.”

O’Shaughnessy and Mullane both said, “I disagree.”

McCaffrey: “If this was simply about transfers, I have no problem with that. I think what you’re not seeing is that the council approves the budget. That budget is in place for the coming year. You’ve already set aside money for a certain purpose. The department head has the authority to encumber that money as the council has already appropriated to that department. I agree with you about transfers. If there’s transfers going in and out, and you want to limit that to $10,000, I’m totally supportive of that resolution. But when you’re limiting the ability of our department heads to get their work done, then I have a problem with that. As Scott Schrader said previously, it will slow down city government and we’ll see what slows down as a result.”

There was some question as to whether Ottaviano originally recommended the term encumbrance to be added to the resolution.

“You recommended that it be put in,” Mullane said.

“Yes,” said Ottaviano, “because I thought that’s what he wanted.”

Mullane: “We owe the state of New York a lot of money for the next 10 years. We’re trying to be very cautious with what we have.”

Alderman Joe Oates: “Just going through our expense sheet, there’s not a lot over $10,000. I mean we’ve got some here but you counted them up as 75 based off of this?”

Schrader: “The problem we have is that there’s language in here that a purchase or a transaction may not be split in order to circumvent this policy. So we spend hundreds of thousands of dollars on paving. Hundreds of thousands on utilities and gas. When we pay a bill, we’re not paying $10,000 at at a time necessarily. But we encumber all of it.”

Mullane: “Do you have a problem with the 10-day advance notice in writing?”

Schrader: “Again, that’s not what this resolution says. It says, ‘City council approval will be required for all budget amendments to include the following … ’ and it includes encumbrances, which means that we have to have city council approval.”

Schrader then gestures for Mullane to respond.

Mullane: “I think of us as being the legislative body in charge of the finances so I don’t have any problem with that.”

Abbot: “I know this all comes back to the $50,000 for outside legal fees that John locked up. But I think part of that was he didn’t want his fund raided any more and there was like $180,000 in the fund to begin with. He was only asking to encumber fifty. He said if you want to go ahead and steal the 130 he basically said go ahead and do it. They stole a bunch of it.”

Ottaviano: “That’s exactly it. My fund kept getting hit. It still has to go through finance and it still has to be approved. I just stopped people from raiding it. But do what you want. It’s your call.”

Schrader said he asked Ottaviano about the encumbrance and was told of a pending arbitration case that will require those funds.

“Well then maybe we should start negotiating with our employees and have contracts,” said Mullane. “We have three unions with no contract. I have a serious problem with that.”

“We are negotiating with our unions,” said Alderman David Wohleben. “It is a give and take in negotiations and we’re not going to give this city up. Don’t say we’re not negotiating.”

“Well, it’s takes as long as it takes to get a good contract,” Wohleben said.

“We have a police contract,” the mayor said.

“And Mr. O’Shaughnessy will be speaking about that later,” Mullane said.

The mayor said she wouldn’t support the resolution unless “encumbrance” — including purchase orders — was changed to “transfers.”

O’Shaughnessy: “This is a resolution that I’m bringing up. I’m not saying it’s perfect, but I believe in it. If the majority of our council has a problem with this, then let it be. But there’s no point in continuing to waste our time when I don’t see where there’s any type of problem whatsoever.”

Abbot: “The sad part is most of this is important. It’s all important. I don’t want to deny it. But you’re throwing it at us like it’s an all or nothing thing. I think 80 percent of it is a good thing.”

Mullane: “If you take out the word ‘encumbrance’ can the same situation can happen again? The money can can encumbered unbeknownst to us? I feel we had a right to know it’s being encumbered, that’s all I’m saying.”

Later at the regular council meeting — which follows the discussion at “the meeting of the whole” — the vote went three in favor of the resolution (Mullane, O’Shaughnessy, Alderman Mark Devine) and three against (Wohleben, Oates, Abbot) with McCaffrey voting against the measure to break the tie.