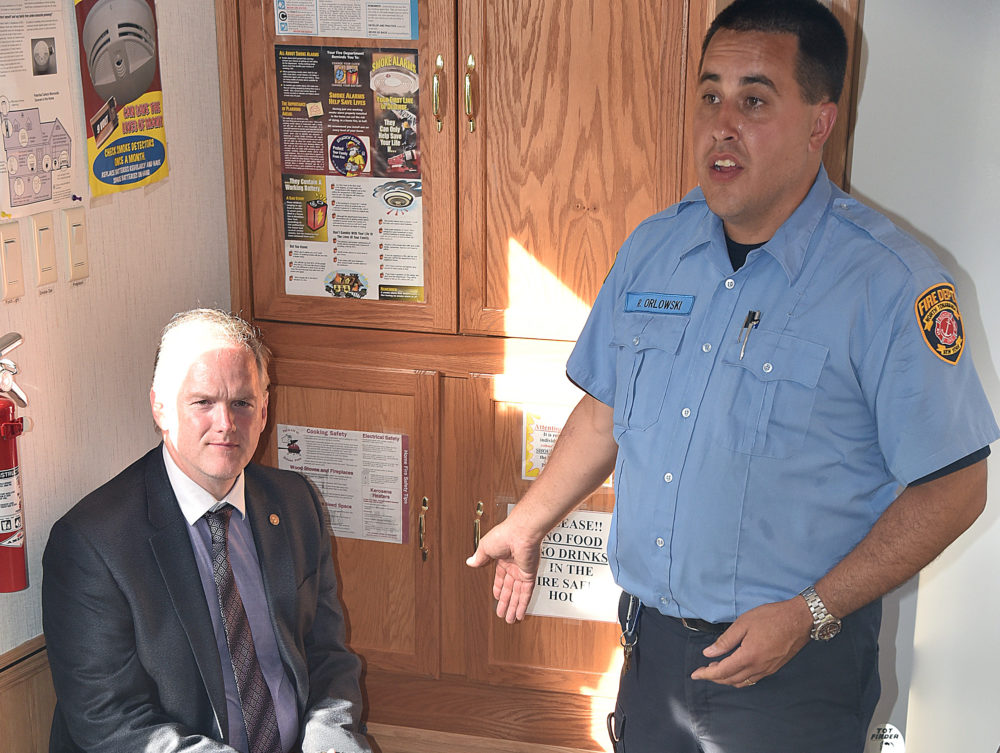 It’s a little bit of Tomorrowland on wheels designed to show young and old alike strategies for fire safety and survival.

That’s the message from NT firefighter Rob Orlowski, who addressed the city council Tuesday during a work session to request funding for the $56,000 project.

He and fire chief John Lapham also demoed the fire-safety trailer, which a features bleacher-style seating area in the simulated kitchen and living room. The popular trailer, parked outside city hall, was on loan from the Niagara Falls Fire Department.

There, they saw the handles of precariously placed pots and pans magically swivel to the “safe” position away from the possibility of small, curious hands.

Mayor Art Papps and council members watched as an innocently placed piece of paper began to smoke near a simulated fireplace.

The smoke — actually a water-based “fog” machine — was soon out of control and participants were asked to move to the “bedroom” area of the trailer where Orlowski said that’s when children would be instructed to wave a blanket outside the window.

“Each kid takes the blanket and they are physically doing it in the window like at their house,” Orlowski said.

He said kids seeing and doing is an important part of developing the “muscle memory” that could get them to do the right thing if the situation arises for real.

The truck is always in demand for presentations at schools, daycare centers and civic groups, Orlowski said. And that’s the problem.

In addition to doors that heat up to simulate a fire on the other side, NT’s version of the trailer will feature accessibility for all levels of mobility.

“One of our firefighters can’t take his son through there,” Orlowski said of Niagara Falls’ trailer, which is not compliant with the American With Disabilities Act.

Lapham said this will allow them to expand their audiences. “We want to get it out to the senior citizens and getting them to see it more,” he said.

Other upgrades will include smoke detector-activated strobe lights that demonstrate their usefulness to the deaf and those hard of hearing as well as a generator to satisfy the voracious energy demands of the trailer.

“This pops all the generators at the schools to the point where the principals don’t want us to come,” Orlowski said.

In an effort to spare city hall the same fate, Orlowski did not turn on the trailer’s air conditioning during the abbreviated walk-though, which occurred in 80-degree weather after baking in the sun for hours.

Orlowski told the council the trailer was a 15-year investment, and it had come down in price from more than $80,000 when he submitted an almost identical proposal a few years ago.

A question was raised regarding grant funding and Orlowski said many were applied for but resulted only in small amounts.

Some cost savings could be achieved by deleting the generator for $5,000 as well as using the sign department to provide the lettering on the outside of the trailer. Orlowski said the council could also put their names on it as well as any other businesses that would donate money to the effort.

Besides having the most advanced fire-safety trailer in New York state, the NTFD would have the ability to show it without restriction.