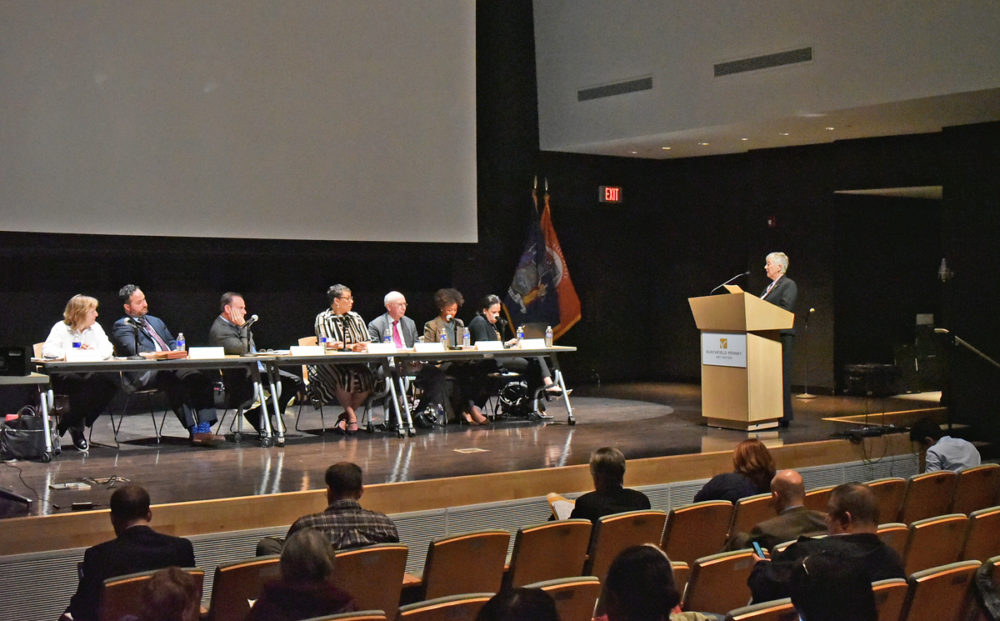 Fusion voting is a scourge on New York State and needs to be eliminated to help stop the party-invasion tactics that have corrupted the Conservative and Independence parties and makes a mockery of our electoral system.

Fusion voting is also an important vehicle for allowing choice among voters, gives third parties a stronger voice influencing the platforms of major parties and has been constitutionally protected by the courts since 1910.

Those were some of the arguments made at Tuesday’s NYS Fair Elections Hearing, the last of four taking place across the state ahead of a Dec. 1 deadline for creating a public finance program.

The aim is to limit the influence of big donors and re-shape the way candidates are elected by empowering individuals with matching funds for legislature and state-level candidates. This would be done through a small-donation system that would see contributions matched 6 to 1.

Most spoke out in favor of such a system at the hearing — including Conservative and Libertarian-endorsed Niagara County Legislature candidate Dave Mongielo from the Town of Lockport — although some opposed it because of the program’s cost of about $100 million in light of the state’s financial situation.

There were other issues including the current stipulation that to receive 6-to-1 matching funds no outside-the-district contributions can occur. Some speakers said that would financially starve independent candidates running against wealthy candidates able to finance themselves outside of the system.

Others also suggested if a less-financially endowed independent candidate can get matching funds, what’s to stop a wealthier incumbent from doing the same? Essentially giving them a further six-fold advantage.

In the end, the goal is to get more individuals, independents and grass-roots community leaders and less party functionaries into office by lowering the amount a single donor can give — which lessens their influence over a candidate or party — as well as lowering the amount of money necessary to run a successful campaign. (Although some countered this favors candidates with large war-chests already built up.)

Reducing or eliminating contributions by lobbyists and contractors doing business with the state was another suggestion made during the hearing.

Several speakers reported that states with similar programs in place have seen results consistent to their goals.

Ultimately, a better way forward will be found by creating a system that encourages honest individuals to run for office in a government designed to be open and transparent.

However, the commission has also been tasked with deciding the fate of Fusion voting in NYS, adding a confusing element to the hearing as many said the issues are not directly related.

Most of the comments focused on the Fusion-voting aspect during the 3-hour hearing at the Burchfield Penney Art Museum in Buffalo.

That debate was more divided than the finance question with some saying eliminating the cross-endorsement of third parties would give “dictatorial control” to the major parties.

Others said the “party invasion” by major parties into the minor lines proves the system is broken.

During his speech, Mongielo produced primary petitions for the Conservative Party in Niagara County that had family members of Assemblyman Mike Norris listed on it as committee members.

“Mike Norris, who was just here, of course supports party fusion because he himself is manipulating the Conservative and Independence parties,” said Mongielo.

One solution to fixing the “party invasion” question that largely powers the desire to end Fusion voting is: “Make it illegal for officials, government workers, government contractors and family member to get on party committees,” Mongielo said.