Taxes, environment, transparency: What they all agreed upon at Lockport’s mayoral, assembly debates

Hard to believe, but the five candidates offering their thoughts on the City of Lockport and NYS Assembly District 144 seemed to agree on most major, common-sense issues.

Also, reducing the financial burden on property owners who are bearing too much of the responsibility to fund public education.

And getting a better deal with the New York Power Authority as we ship most of the power of Niagara Falls downstate while paying some of the highest rates in the country.

Creating more jobs and vastly improving the economic climate in the City of Lockport and eastern Niagara County.

“Lowering taxes” was the most-repeated phrase of the evening but it seemed only Assembly Candidate Joseph DiPasquale and mayoral candidate Michelle Roman offered any specifics on how to get there.

DiPasquale says he’ll push for the state to fully fund education, reducing the crushing burden it places on property owners. “That’s a place where we need to be,” DiPasquale said.

Bringing the subject up on his own as well as answering a specific question from Niagara Gazette managing editor and debate moderator Mark Scheer, DiPasquale said he’d vote to legalize marijuana — which he said was coming to the state regardless of his vote — and reap the hundreds of millions of dollars that can be used to fund education as well as general tax relief.

One of the few major points of contention during the candidates’ panel fell on the city side: whether the mayor’s position should be full or part time.

Despite candidate Keith McNall’s opposition to the idea — as well as Green Party candidate Wade Van Valkenburgh — it was one of the few suggestions to actually reduce the city’s budget through the elimination of half a salary and benefits.

“I will be available 24 hours a day, seven days a week,” said Roman. “I will be working with city officials like 3rd Ward Alderman Mark Devine, and I will be accessible to every single person.”

“He’s the city manager in those respects,” she said. “Those are two redundant services.” 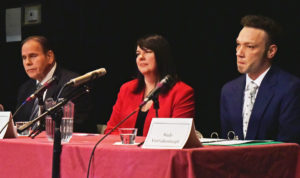 Giving the council power to appoint residents to important city boards and advisory committees is something Roman would push for.

Many people don’t realize those appointments are made solely at the pleasure of the mayor and there’s no way to override them even when the most qualified applicants are not chosen. (This happened in North Tonawanda recently when the mayor there chose a “friends and family” planning-board candidate who was under-qualified compared to a competing applicant but had the dominant party’s seal of approval.)

Roman said she’d make sure residents from each ward has seats on these boards and committees.

“We do not need a stronger mayor dictating to you,” Roman said. “We need an open government where our citizens can go to receive the information they need.”

Increased transparency in government achieved universal agreement amongst the candidates.

In particular, Van Valkenburgh cited the abysmal scores received by the Lockport Housing Authority from the Buffalo Niagara Coalition for Open Government as evidence the city needs to work harder in this arena and those efforts should be spearheaded by an engaged mayor.

Van Valkenburgh also said the city’s website needs serious attention. “Go to budgets. None of the links are working to look at he budgets. The most ridiculous thing is the headline is written in Latin. This is open government? I’ve been trying to get detailed information for quite a while and it’s not accessible.”

Roman went even farther pushing the concept of Open Data that the City of Buffalo and New York City have already established.

“We should not have to FOIL for information that is public knowledge,” she said. “The only things that should be kept private is personnel or HIPPA information.”

As for her opponent, for someone with a “career as a legislator” as he put it, McNall offered no specific proposals to lower taxes in the city, improve infrastructure or increase transparency or civic engagement, promising only to take a hard look at how the city is currently operating.

As part of his non-specific agenda of improving the economic situation in the City of Lockport, McNall hoped to piggyback off the so-called “economic success” of Niagara County and its IDA. But even fellow Republican Norris said repeatedly that “high taxes and a lack of jobs” were the biggest problems for the area. 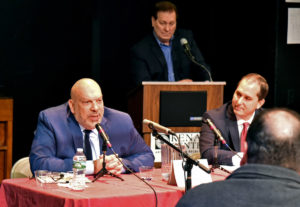 Assembly candidate DiPasquale (above left) stressed repeatedly that for the sake of the area, Gov. Andrew Cuomo needed “to be engaged not fought.”

But the 500-pound elephant in the room that night was Norris’ (above right) connection and complicity in the corruption investigation of his mentor, former State Senator George Maziarz.

“Let us be clear,” said DiPasquale. “Corruption is in this room tonight.”

Without comments from DiPasquale and a specific question from Scheer, it’s unlikely current appointed Assemblyman Norris would have brought up the subject on his own but this is how he addressed it:

“I was issued a subpoena and fully cooperated with the authorities. I was never charged with a  crime and I was never the focus or the target of the investigation.”

But it’s a little more complicated than that.

“It’s stunning what they didn’t charge people with,” Maziarz said a few months ago during a series of sit-down interviews. “Current officials holding office.” 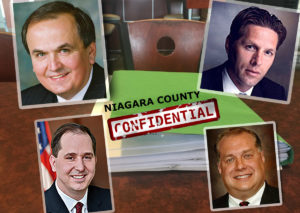 Norris also knew about the illegal pilfering of his campaign fund, Maziarz said.

It was the part about Norris not alerting George to the misdeeds in the senator’s office — eventually bringing down the most powerful politician in Niagara County — that rankled Maziarz the most.

What it boils down to is that Republican Norris is not the right person to represent the 144th Assembly District in Albany, DiPasquale said.

“We have not had someone to represent us in Albany to go toe-to-toe with the down staters,” he said. “All we do is complain.”

“Mike was in Middleport and they asked him if you could fix the (Erie Canal) wall there and they said you couldn’t do anything. This has to be done, and Albany must help get it done.”

DiPasquale also said Norris is taking money from companies looking to expand landfills in Niagara County; Norris did not counter either assertion.

“Corruption needs to be eliminated on both sides of the aisle,” said DiPasquale.

That said, as an appointed representative of the minority party at the state level, Norris did offer some sensible suggestions from his time in the Assembly for how to improve the accountability and openness of the state government.

For example, fees and taxes from Western New York need to go into specific funds — not the general fund — to invest in the area’s infrastructure and pay down the state’s debt, which is the second-highest in the country, he said.