by Joseph KisselFebruary 28, 2018
If only one consensus emerged at Tuesday’s public hearing, it’s that Nash Road is a speedway, “The Wild West.”

Opposition ran high to proposed changes for Nash Road that would turn it from a four lane thoroughfare to single lane in each direction with a permanent turning lane in the middle.

Officials pushing the plan by engineering firm Parsons Brinkerhoff on Nash Road between Erie Ave. and the Wheatfield townline said safety was a main consideration with a reduction of “conflict points” a critical component of their recommendations.

Residents who appeared before the council with their stories and take on the matter seemed to prefer the devil they knew and avoid changes.

Common stories included five-minute waits getting out of driveways at peak times; traffic that terrorizes when mowing the terrace; rude drivers who feel inconvenienced going slower than a racetrack’s pace.

The plan to go from four lanes to two was considered dubious by many residents, and the construction of the Twin Cities Highway was citied even by City Engineer Dale Marshall as one of the great crimes against the Lumber City. 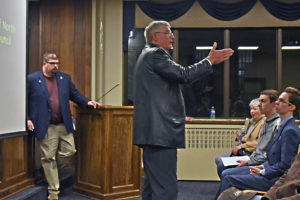 To begin his presentation, City Engineer Dale Marshall recounted the history of Nash Road and how it was widened to four lanes in a failed attempt to connect the I-190 to Niagara Falls, creating the “Berlin Wall” of North Tonawanda. Marshall said a plan to “blow up” and re-invent the Twin Cities Highway as a proper entrance and greenspace to the city would cost $20 million.

Excessive speed was continually cited as a real concern amongst residents although they also said anecdotally there have been few serious accidents.

A similar proposed change to Payne Avenue between Walck Road and Meadow Drive drew considerably less discussion and opposition — despite Payne’s Restaurant reportedly being unhappy with the change.

Many speakers said a dedicated turning lane makes sense for a street with many businesses like Payne but not for one that’s primarily residential like Nash.

The projects would only re-stripe the streets with no road reconstruction, widening or moving of curbs. It would cost about $170,000 for Nash Road, including $50,000 for engineering work, Marshall said. The Payne Ave. project would cost a little more, he said.

Two concepts were presented: one with street parking on one side of the street, and another with bike lanes. 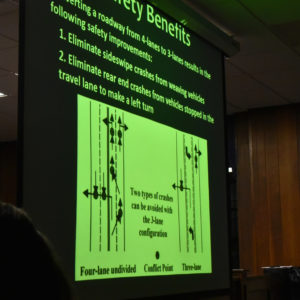 One slide from the city’s report, which is available on the new website.

Officials pointed to the success of other similar projects in Erie County but some speakers called that characterization into question and said there was no data to support those claims and those roads are primarily commercial.

The study that produced these recommendations cost $15,000 and can be viewed on the city’s new website.

Members of the common council re-iterated the point that any plans to re-stripe Nash Road or Payne Ave. was preliminary and no timetable existed as to any additional phase of the project.

Other comments from the public hearing:

“There’s a lot of policing on Meadow but Nash Road is like The Wild West.”

With a one-lane approach to traffic: “If one person is going the speed limit, everyone is.”

“The traffic goes past my house at 50 mph. I bend over to pick something up and I lose my pants.” 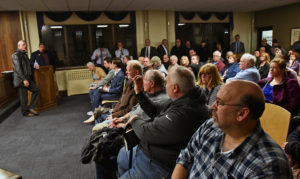 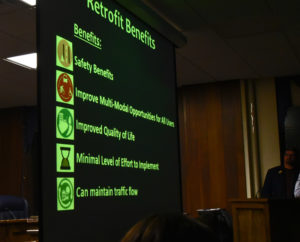 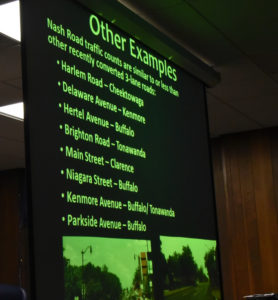