Lisa Peterangelo, above, of the Community Health Alliance of NT owes its existence to a five-year federal grant to help fight teen drug and alcohol abuse.

The program is looking to change the cultural norms in the city regarding drug and alcohol use.

“I hear people say, ‘It’s OK if my kid drinks at the house because at least he’s not behind the wheel of a car.’ It’s not OK.”

“My job is to grow this coalition,” Peterangelo said.

Councilman Robert Pecoraro is the group’s government representative along with 11 other partners including media and the school district.

Peterangelo said an online survey will be used in conjunction with the school district and she’s hoping the results will be highly accurate by the use of trick questions.

“Because kids are kids and they like to be funny and dramatic and up the ante of their use of drugs,” she said.

That said, student reports of life-threatening drug use are taken seriously.

“If the child is telling us they are using heroin, I’m going to believe them because that’s on my conscience for the rest of my life.”

“I am very passionate this as you can tell,” she said.

Councilman Austin Tylec said he appreciated the “real” representation of the situation by CHANT in the Lumber City and “there’s no painting a pretty picture.”

After finishing with a pivot to the parents of these at-risk kids, the discussion moved to Niagara County’s recent admission to the NYS Land Bank Program and what it can do to improve the success of getting houses out of foreclosure and into the hands of owners who want help elevate those neighborhoods.

For years, out-of-city and out-of-state landlords have trolled county auctions, including those in North Tonawanda and bought up properties for as low as $500 — never to improve them and bringing down the rest of the neighborhoods.

“Nobody wants to live next to that,” said Niagara County Legislator Richard Andres, who was joined at the council workshop by Niagara Orleans Land Bank Chairman and Niagara County Manager Rick Updegrove as well as Andrea Klyczek, Director of Regional and International Development for the county’s IDA. 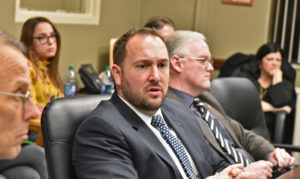 What the land bank does is market favored properties the city sets aside and vet potential owners to make sure they will be living at the location and not making it a rental, Updegrove said.

The county’s program was modeled after the implementation of the Land Bank program in Chautauqua County.

Updegrove said the rules that North Tonawanda establishes will be up to the municipality but hoped the city would follow the county’s lead.

“We recommend the proceeds of the sale go to the the land bank to fund it,” he said.

“The benefit to the municipality is that you are no longer liable for the property’s county and school taxes and to make the city whole,” Updegrove said. 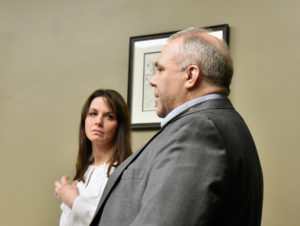 “The City of Niagara Falls is very interested in that because many of their properties have not sold during the In rem auction,” he said.

It takes three years of unpaid city taxes to become part of the In rem auction, he said.

The city’s eventual rules and procedure’s would be signed off by the mayor, Updegrove said.

Tylec said he hoped a “well-rounded group of people” would be involved in the process.

The city’s next In rem auction is March 10 but Updegrove said the program won’t be up and running by then. Another auction will take place later in the year.

EDITOR’S NOTE: This story was edited after originally published information was called into question. This material removed includes the first two paragraphs:

Within 30 minutes on Tuesday the N.T. city council was told by government officials the schools there have a higher pregnancy rate than Niagara Falls but that it’s also “the most stable community in Niagara County.”

The dire report on N.T. kids came from Lisa Peterangelo of the Community Health Alliance of NT, which owes its existence to a five-year federal grant to help fight teen drug and alcohol abuse.

as well as the headline: “N.T. has higher teen pregnancy rate than N.F.”