After a public hearing Tuesday drew a full house at N.T. city hall, council president Eric Zadzilka and the rest of his colleagues stated unequivocally that the city’s current truck route will not be changed.

Traffic Safety Advisory Board member Mark Daigler (above), who also works in the city’s signals and signs department, said if he lived on East Robinson or Wheatfield Street he wouldn’t want the change either. Daigler said the board was tasked with creating a more direct truck route after speaking with truckers who find the city’s current circuitous truck route inefficient and confusing.

There were no speakers at the hearing in favor of changing the route. At least a dozen speakers from the community, however, warned against structural damage to their properties, resale value as well as environmental and safety concerns. Damage to Wheatfield and E. Robinson streets and underlying infrastructure was also cited as a possibility by residents. 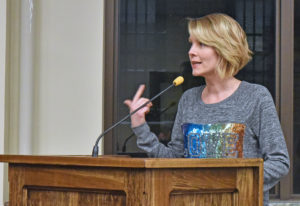 One resident who spoke out against the truck-route changes said she purchased her home on East Robinson only one year ago and would not appreciate the change in character to her neighborhood the large trucks would bring.

Previously, the traffic advisory board unanimously approved the plan.  The River’s Edge project at 600 River Road and the large amount of trucked-in soil caused the city to re-examine the current route.

However, Alderman-At-Large Austin Tylec said the condo project, which was proposed four years ago, will proceed without any changes to the truck route.

There were some suggestions that if N.T. wants new development and to keep taxes from going up, the city needs to make itself more attractive to new businesses, which might include changing the truck route.

Tylec disagreed. “In four years, businesses will be begging to develop in the city,” he said. Tylec also suggested it might be time for the city to pay for a professional assessment of the city’s truck route, which has never been undertaken before.

The truck route was changed five years ago by Zadzilka and then-councilman Rich Andres when the city had less truck traffic, Zadzilka said previously.

Residents leaving the public hearing breathed a sigh of relief  that all officials indicated no vote would be taking place on the matter and no changes were on the table. 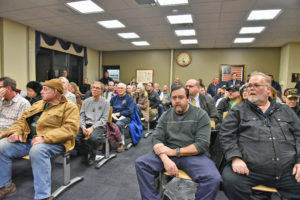