Overheard at North Tonawanda’s zoning board meeting on Monday

“Properties that are within 500 feet of a municipal boundary, state waterway, state highways and county office buildings may by state law be referred to the Niagara County planning board for a non-binding recommendation,” said North Tonawanda Zoning Board Chairman Kenneth Braun to open Monday’s meeting. “That board has 30 days at which to respond after which this zoning board of appeals has  a legal power to vote on the variance request.”

The first case of the evening involved Richard Fix of Rich Pools and a requested zoning variance to construct a 50-by-60 foot steel storage building on property located at 108 Sommer St.

“What I’m trying to do,” said Fix. “A year ago the board granted me permission to put a 30 by 60 building up. So I had to get out all the concrete and floating pads and all that. But since then we’ve laid the 30 by 60 building out. It’s not deep enough. You can’t put like a couple of classic cars in there together. It’s not big enough.”

Braun: Something that just caught my mind here when you were speaking is it doesn’t leave enough room for classic cars?

Braun: If I remember when we originally talked about this and granted your variance — and gentlemen quote me if I’m wrong — we were under the impression that this was to clean up the problems and the things that were out there.

Fix: It’s for me to put my equipment in. I have $100,000 in Bobcat equipment that sits out. A couple of trucks. It’s a storage building.

Braun: That’s what I’m asking. So it’s for your equipment? Not primarily for classic cars.

Fix: Oh no! But I have a couple of cars that I’m going to put in is all. It’s for my swimming pool construction equipment and stuff.

Braun: Thank you for clarifying that. If you knocked that building down to 50 foot wide, which is what you’re asking us now. Instead of 60 feet deep. If you go to 54 foot deep, which means six foot less, you can walk away here tonight. You are done.

Fix: I spent hundreds. I spent probably $1,500 to have these plans drawn up for the building. If I had to absolutely because I’ve got to get the ball rolling on this. It’s been a year. I’ve done all my concrete work.

Braun: There were some concerns presented to this board in regards to the size of this building. And I will clarify this right now that number one the cross area from this building is an M1 (light manufacturing). Is that correct, Mr. Capozi?

Braun: The M1 is the empty lot across from you. Therefore it is not required to have a 50 foot setback. It’s only required to have 25 and we can grant the variance on 25. Do you understand what I’m telling you? If you were residential you would have a setback of 50 feet.

Braun holds up a piece of paper. 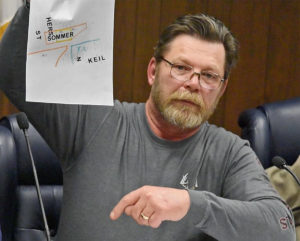 “Anybody wishing to speak in favor of the request?”

“Anyone in the audience wishing to speak in opposition to the request?”

Dusza: I am saying that should be fifty feet, the required front yard. When it’s fifty feet in front, fifty feet in back. The minimal regulations of North Tonawanda — not what I want — but what North Tonawanda wants — that is 100 feet. He has a depth of 129 feet. That means he would have 29 feet to use that property in that area. Who in their right mind would put that building in that location? That is so critical to you following through on your own regulations.

Dusza: There are so many things wrong. North Tonawanda’s own consultant Stewart Brown addressed this during the policy making, and I participated in that. He said the city should address the fact that there are some areas of the city that that have incompatible uses.”

“I hope you really weigh your decisions,” she said.

After some additional discussion a member speaks up.

“We need a new SEQR,” said zoning board member Jacob Haacker of the State Environmental Quality Review. “It is from last year’s motion. We will be requesting a new SEQR.”

Braun: Do you know what that means? We are going to table you because I’m not going to accept the old SEQR. Should have been a new SEQR filed with this. Luke?”

City Attorney Luke Brown: “Yeah. I’d get a new one.”

Fix: I was at the building department when I was told what I had to do to get this approved.

Braun: But you didn’t fill out a SEQR?

Fix: What is a SEQR?

Braun: It’s the short environmental form. The same one you did a year ago. I will not make a motion without a new SEQR on file.

Fix: How long is that gonna take?

Braun: We’re going to see you next month.

Fix: Another month?!? I’m just wondering why I wasn’t given this? Nobody said nothing about a new SEQR or I would have filled it out.

Capozzi: Can we simply amend this SEQR like you guys do every month?

Braun: We can amend it.

Capozzi: You do this every month, and you just sign this change.

Brown: I would prefer a new one. It’s a different project.

Braun: Based on the recommendation from the city attorney we would like a new SEQR. I’m sorry.

Bruan: The board will table the motion until the December meeting. You gotta have a new SEQR on file.

Fiz: Nobody told me I had to have a new one.

Fix: I’m gonna have to come down in the morning and get it …

Braun: We’re moving onto the next order of business.

The next zoning matter involved the installation of a six-foot stockade fence in the front yard of property at 70 Pine Street.

“Over the summer time I had a fence in my backyard and I was tired of gluing back together so I called a few fence companies got several estimates,” said John Lesnee. “I made a significant investment in my property. It’s already standing. It’s already up.”

The house has two entrances.

Braun: “The legal address is 70 Pine St. We love your fence. All of us were by it. Unfortunately, there’s one of two things that has to happen. We could make you step that entire fence that’s along the sidewalk back 15 feet. Or as you’re facing 70 Pine in front of your house that fence is on the right hand side, the corner that is next to your neighbors, you’re going to have that cut back 15 by 15 feet so it creates a 45 degree corner.”

Lesnee: ”She has a very good view of the street from her driveway.”

Braun: “Your fence comes within two feet of the sidewalk. When she backs out with a car she has the right to clear vision.”

From a board member: “We have a seven foot high fence in her front yard.”

Another: “One of the options is to just take it to four feet?”

Braun: A front yard is not permitted to have a a six foot solid fence. I’m sorry we have to go by what the actual legal address is.

Capozzi: Here’s what you can do. You can ask the city assessor and city engineers to change your address to legally be Wright Avenue. You an do that. Now that means now the area where this fence is becomes your legal side yard. However because you’re on a corner lot modification that first 15 feet, you still cannot have a fence. However, the board can act if it chooses to address the fence in a restricted area in some cases also the 20 by 20 angle to allow visibility for a neighbor behind it.”

Capozzi: In this case because the your fence is in the front yard I would strongly recommend to the board to never approve solid fences in the front yard. It’s never been done. So my suggestion would be to table it. See if the gentleman is willing to approach our assessor and city engineer to change his address to Wright Ave. thereby giving the authority or a little more leeway to address the fence in a 15 foot setback.

Braun: Table it, and we will allow the procedure to happen within the next 90 days? That will allow you to go to the assessor and the city engineer. And once that’s changed it would be a new application because now what was your front yard is isn’t your front yard anymore. And Mr. Capozzi would look under a different section in here and that would tell what had to be done then which is a lot less than saying you’ve got to take the fence down.”

Braun asks if anybody wishes to speak against the project.

Braun: It’s already sent to the county because it’s on a county roadway. Ward Road is county road number 429.

Dusza: Because it has to do with section 239-m of the state code? I’m glad you brought that up. All area variances are going to the county …

Capozzi: No not all variances. Only if you are within 500 feet of a municipal boundary, waterway or a county or state highway.  Ward Road is a county road. That’s the only reason they bring in the county.

Braun: We’re not going back there. Stay on the point.

“I’ll answer that. Oliver Street is not a county road.”

Dusza: I did not say Oliver Street. Wheatfield St. is a very well-known county road.

Braun: You’re finished. You came up under the pretense of 358 Ward Road. We are no longer discussing Oliver Street. You’re done.”

Dusza: No. I’m not talking about Oliver Street. I’m talking about the 239-m. When an applicant triggers that it has to go to the county. I’m saying to you, is it just some?”