Pascoal calls for city democrats’ chairman to resign over mailer

Instead, he delivered this address during the public participation portion of Monday’s meeting.

“I would like to read into the record … Niagara Falls is a small town. People know each other and word travels fast. I’m here to tonight to reclaim my reputation. I’m not disputing or contesting the outcome of the race for city council. But I was done an injustice. And I want the council to know it. And more importantly, I want the people of Niagara Falls to know it.”

“Gordie Stewart III, chairman of the Niagara Falls Democratic Party, is an unscrupulous man and should be ashamed of himself. Gordie libeled me. He called me a tax dodger and thousands of political mailers printed those words to voters all over the City of Niagara Falls.”

Pascoal furnished proof of payment for most of the bills being claimed as unpaid taxes, according to a Niagara Gazette report by Philip Gambini. (“I produced that proof in one hour,” Pascoal said in a statement issued before the election. “So why did Niagara Falls Democratic Chairman, Mr. Gordon Stewart III, send out thousands of mailers spreading that lie about me and so close to election day?”)

“Libel: noun. A published false statement that is damaging to a person’s reputation. A written defamation. In the City of Niagara Falls reputation is important. Verb: defame by publishing a libel. I allege that the political postcards sent out to the thousands of voters libeled me. A lot of my friends that know me don’t question that. But a lot of people don’t.”

“This act was unconscionable and unwarranted. I’m calling for Gordon Stewart III’s resignation. It’s time for Niagara Falls to raise the bar on ethical conduct. We must clean up our act because we will never reach our full potential mired in the muck like animals desperate to keep our cheese at all costs.”

Loud and sustained applause follows his exit from the podium.

(Pascoal began his address with this: “I would like to extend a sincere congratulations and best wishes to councilman elect Chris Voccio, Bill Kennedy and Andy Touma. I’d also like to thank councilwoman Grandinetti for eight years of service.” 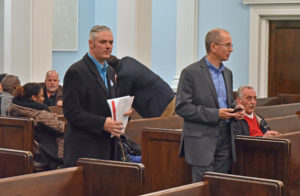 In other news, a resolution by recently re-elected Councilman Andrew Touma to raise street-parking rates to $5 — from May 1 to Oct. 31 — did not make it to a vote in that form.

The resolution he sponsored — and passed unanimously — was amended to only raise the off-season rate to $2.

Opinions differed amongst the council members and administration as to whether $5/hour was a “going rate” for a destination like Niagara Falls or whether it would be a turn-off to tourists venturing into downtown.

But former council candidate Brett Biro said: “The locals don’t support downtown much.” He also said the city would be foolish not to raise the rate to $5 an hour.

While the council also voted to raise the prices of resident parking passes for the city’s three off-street lots and parking ramp from $20 to $25, most agreed it was a good value and unique to most cities and tourist destinations. (Residents 62 and above can purchase cards — including a $10 deposit for all purchasers —for $15.)

In another nod to locals, Niagara County residents can purchase the passes for $50 and $30 for those over 62. Reduced rates apply to additional vehicles — up to four — registered to the same address. Councilman Kenny Tompkins asked if the benefit could be extended to residents of Grand Island. 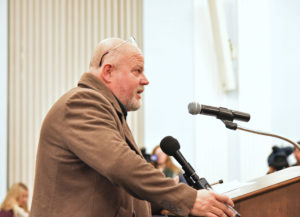 Former council candidate Brett Biro said: “Everybody else is making money off parking. Why shouldn’t the city?”