Could more oversight have prevented Water Board disaster in Niagara River? 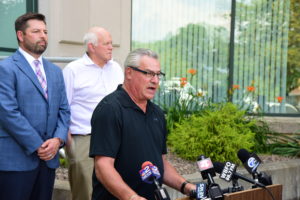 While definitive answers were nowhere to be found Thursday when N.F. Water Board chairman Dan O’Callaghan (above) read a statement about Saturday’s expulsion of carbon backwash into the Niagara River — a possible criminal action as well as an unmitigated public-relations disaster — there is one thing we know …

Concerned residents, city officials and council members who want to attend water board meetings to observe and provide input cannot unless they are willing to forgo the same opportunity or responsibility to be at Niagara Falls City Council meetings.

O’Callaghan stressed he could not go into detail about what led to Saturday’s discharge of thousands of gallons of untreated water during the upgrade “of an important part of our wastewater treatment plant.” He said the water board has launched an “internal investigation” to find out what went wrong.

“Our priority is clean water and properly treated wastewater. While we can’t take questions or provide additional answers at the present time because of an ongoing investigation, I can commit to provide further periodic updates as things develop.” 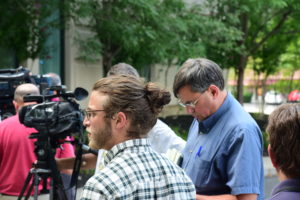 A Channel 2 reporter proceeded to ask a question: “How much of this was human error?”

O’Callaghan wouldn’t say if it was human error or a mechanical issue, and reiterated he couldn’t answer those questions because the water board is “under investigation.”

This Niagara News Source reporter then asked O’Callaghan when the filters are changed and flushed since many considered this maintenance procedure poorly timed but said that was “day-to-day information” he didn’t have.

“Was this announced at a water board meeting?” Kissel asked.

“We know this is part of Project 69, which has been going on for a long period of time,” he said.

Kissel: “One of the issues that has happened is that the water board meetings have been changed to the same time and night as the Niagara Falls City Council meetings. A layer of oversight has been removed from the water board in that residents who want to follow what’s going on with the city council now also can’t do that with the water board.”

O’Callaghan: “We have our nights and they have theirs, I guess. The Niagara Falls Water Board consist of five commissioners, and those commissioners have jobs also, and Monday night seemed to be the night that everybody could make without affecting their financial outlook or anything like that.”

Kissel: “That’s a lot of different eyes and ears in these situations … “ 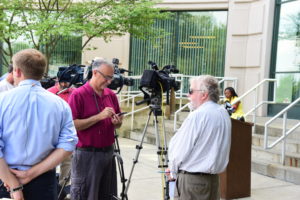 O’Callaghan and his associates turn and walk up the stairs to the front entrance of the Water Board building on Buffalo Avenue.

A reporter’s question becomes audible: ”Were those trainees that were operating?”

No response from the men who called a press conference not taking questions from the press.

Tom Prohaska of the Buffalo News asks: “Two of your commissioners say they are being frozen out of information. Are they wrong?”

As the small band reaches the door, another journalist shouts out: ”Dan! Who pays the fine if you get fined?”

And finally, another reporter asks,”Is the incident or the organization under investigation?”

And the door swings shut … 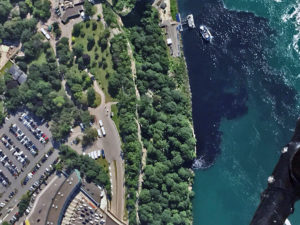