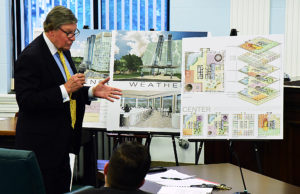 The group behind “The Weather Experience Center” has formally chosen Niagara Falls as its preferred location, beating out Buffalo, which was determined to have a significantly lower tourism potential.

Meteorologist Don Paul — along with Paul Moyer of Entercom and David Norton of Moog Corp. — appeared before the Niagara Falls City Council on Monday to formally request $100,000 “sooner rather than later” to fund a Phase II study. It would determine how much square footage the high-tech learning and conference attraction would need as well as admission charges and how much the center would cost.

“There is nothing in North America that’s like this,” Paul said.

Initially, Niagara Falls wasn’t even on the radar for the “Weather Center” planners. Dean Shibley, head of UB’s architecture school, made the recommendation. “We hadn’t really been talking about Niagara Falls,” Paul said.

The group was originally looking at Buffalo’s outer harbor but concerns developed about how fast the project could take shape there.

“This is an eminently stealable idea,” Paul said. 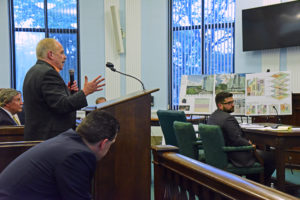 The group settled on downtown Niagara Falls’ One Niagara Center — led by developer Gordon Reger — rather than develop an empty site.

“We think it will do a lot to change your downtown,” Paul said. At the previous presentation in January, a figure of $50 million was cited.

The glass-fronted building features two sets of windows — separated by a catwalk— which is the reason for the condensation that currently clouds the windows and mars most of the views.

After renovations, Paul said the unique window design could allow for dramatic effects including simulated snow and rain.

The center is planning on using up to four floors of the building and would relocate the entrance to the north side as well as moving elevators from the center to the outside.

“That way when guests are taking the elevator they can see the Falls,” Paul said.

He said it took the group years to fund the project’s Phase I but is looking to start Phase II as soon as possible.

After the presentation — which also reiterated the attractions that would be housed there — council president Charles Walker said: “Thank you, and we’ll be in touch with you.” 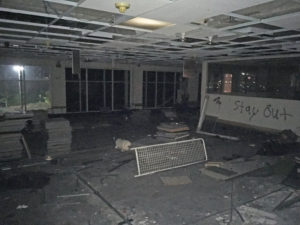 Many sections of One Niagara Center are in shambles. This is the fourth floor, which is where the Weather Experience Center is looking to construct an exciting year-round destination for tourists and a conference center for professionals. 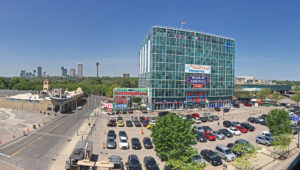