Signage welcoming visitors and residents to the “Home of the Carrousel” was the primary topic of discussion Tuesday at the North Tonawanda Common Council’s workshop session.

The council is considering entering into a five-year agreement with Signtech of WNY, which is located in North Tonawanda at 123 12th Ave., to refurbish and maintain seven signs throughout the city.

The company said signs could be sponsored by local businesses for $1,000. (The business would receive a strip of type below the sign to identify the donation.)

If the city went without sponsorships the price would be higher. However, there was confusion about which signs in the city would fall under the deal as well as the prices for refurbishment and upkeep.

One of the unknown points included whether a sign indicated for Gratwick Park included the one that was recently donated to the city — and erected within the last few weeks — or an additional one.

(It was this unsolicited donation from the Exchange Club of the Tonawandas — which was allowed to hold the highly successful Healing Fields 9/11 tribute in Gratwick Park last year — that brought attention to the absence of signage at “the Jewel of the 1st Ward” as well as at other locations throughout the city.) 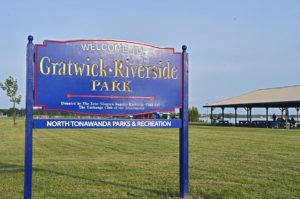 Robert Pecoraro said Gratwick Park didn’t need two signs. No discussion on the point took place. The park has three entrances, however, and the Ward Road and Witmer Road entrances are about 2,300 feet from each other.

Pecoraro also said he was concerned about sponsorship for city signs. “This is me with my chamber hat on,” he said.

City Attorney Luke Brown suggested at $200 a year, the sponsorships seemed something of a bargain. When others highlighted potential problems from possibly too many interested parties, Brown suggested an auction for being included on the signs, which would be located at major arteries into the city.

Whether NT seeks sponsorships to save money or pays for it all by itself, action was urged.

“We need to do this,” said Mayor Arthur Pappas. “They’ve been waiting a long time for an answer.”

Pecoraro said, “We’ve got to find the money and get these signs updated.”

Donna Braun also mentioned that “Rich at the county” might be able to help in some way.

The topic was originally discussed at the Jan. 11 workshop. 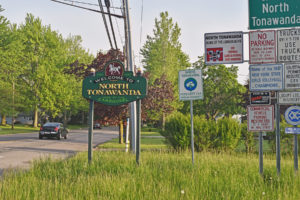 The Wheatfield entrance to North Tonawanda on Nash Road and the Signtech-produced welcome sign.

In other matters, a town-house development at 1100 Sweeney Street was discussed briefly.

Pappas said the development is “not a done deal.” Council members said there was a lot of misinformation being circulated in the community.

“The infrastructure would be improved and not add to the flooding problem,” said Pappas.

Council members said they were interested in learning what neighbors — who have already organized — think about the matter.

Council members want to have a meeting with stakeholders regarding the matter during June.

Additionally, the council expressed their support for a grant-writing effort to get bike racks for Oliver and Webster Street. If the grants were received, the city would help install them. 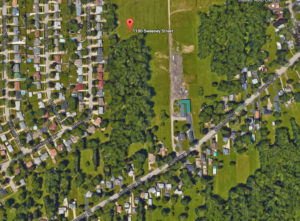