Relief amongst WFP-endorsed candidates after meritless Republican lawsuit get...
Sections
Niagara Falls
Now Reading
Will the Falls be ready for summer or leave them idling in the streets?
NextPrev
Contents
154 154
0

Will the Falls be ready for summer or leave them idling in the streets?

by Joseph KisselApril 12, 2017
“Let's make the tourists that come to this town reflect on their memories of Niagara Falls — and not of sitting in their car. And when they are sitting in their cars, they're not eating and they aren't spending money in our city.” 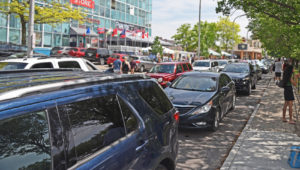 Last year during the tourist season, Niagara Falls regularly found its downtown snarled with cars and pedestrians negotiating around them.

“I’d like to touch on the topic of being prepared for the 2017 tourist season, which will kick off on Memorial Day this year. This past season we saw some of the problems that we have from the increase of more and more tourists coming into our area, which is a great thing. But we want to make sure that when they come to this city we want to give them a good experience.”

“So my recommendation is that it’s too late to get traffic out at 2:30 to 3 o’clock. They need to be there from the early morning until through some time in the night. To make sure that traffic is moving and open so they can get around.” 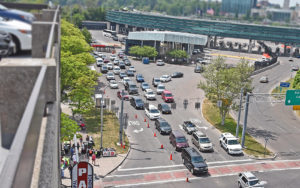 Earlier during the meeting, Councilman Andrew Touma asked Mayor Paul Dyster when Laughlin Drive — in the heart of the tourist area — would be open again to traffic.

“We talked to them, and they are trying to get out of there at the earliest possible opportunity,” said Dyster. “And no later than Victoria Day weekend, which is the middle of May. That would be six weeks hence. If they can get done there sooner they are going to do that. And we’ve let them use some space inside the Rainbow Mall. They will be able to move a large construction trailer out of the way. We gave them a place so they could haul snow off the property during the last snow storm in order to help facilitate their clearing of that.”

Anderluh touched on that later:

“Something that was mentioned at the 5 o’clock meeting: We have to make sure all those roads in the downtown area are open,” Anderluh said. “I know around One Niagara the construction is supposed to be over by Victoria Day, which is basically only a week away from Memorial Day. So we have to make sure that happens.”

“It’s been a great construction season for everybody,” Anderluh said.” That steelwork should be done on time so that crane can get out of there and you can open up the street. Otherwise, it will be complete chaos down there.” 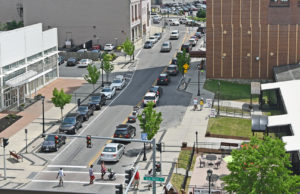 “Also, about a month a half ago we had a meeting on the bus drop off. Not only the bus drop-off but where are we going to be putting all these that are coming into town? They cannot park in our surface lots and they cannot park in some of our metered parking lots. They are taking up too many spaces. So we need to make sure we have a place set aside so busses can park. So they aren’t parking in certain spots. Because they are taking away revenue from us when they coming to the service lots. I see it behind the Jefferson now. All seasons. But there are still busses in there and they shouldn’t be in there.”

“Which leads me to the next thing about enforcement. I hope we are enforcing the parking meters and mores the surface lots. That the people who are going in there are paying. Somebody needs to be there collecting the money. I’m glad to see you instated the parking passes. Now they will be able to be bought at the clerk’s office, which is the best thing you could do. Because to get to that parking ramp; it’s hard to pull in there to find a place to park. Just wanted to let every one know that you can buy a parking pass, which is good on the surface lots and the parking ramp for $25 a year plus a small deposit that is refundable, and it’s good for one year.”

“Last thing, we have to make sure we have good signage in the downtown area. I know they are working on this this but let’s be prepared for Memorial Day. Let’s not wait until the week before and say hey we’ve got to do this, we’ve got to do that. We’ve been talking about this for six months. Let’s make Niagara Falls a great destination point. Let’s make the tourists that come to this town reflect on their memories of Niagara Falls — and not of sitting in their car.”