“We are very close to that now.”

Davignon appeared in front of the council along with project managers from engineering firm Barton & Loguidice.

“We are currently running at half capacity,” said Davignon. “And we can’t change that until I get this pump fixed.” 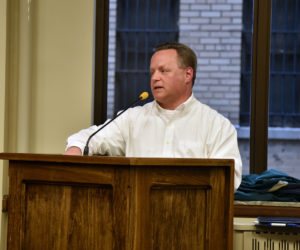 Davignon said the recent power outages damaged some of the treatment plant’s pumps — although he said one of the pumps is set to come back online next week.

“We currently only have two inlet pumps out of four operating. And of the two dry weather pumps, only one of those is operating. I’m running on three out of six pumps that are absolutely necessary to run the facility. So we are not far from catastrophic failure. We’re getting along but if something else goes we are going to have a problem.”

“This isn’t ‘The Sky is Falling.’ It fell. It’s today. So this is something that we really need to plan for.”

After a search involving four firms, Davignon said he decided upon Barton & Loguidice because of their ability to find funding for their municipal projects.

“We won’t be hurt by that expense at all,” Davignon said, adding that he would like the council’s blessing to proceed but doesn’t necessarily need their approval.

“This long-term plan will give us a roadmap for the future and help us identify in a prioritized manner how to do it. This what we should have done when I took over a year ago.”

In addition to fixing more than a dozen different areas at the waste-water treatment plant, there are related efficiencies that will benefit the city.

“Our current gas and electric bills for the 2016 year was $307,000,” said Davignon. “That’s a lot of money. The plant runs 24/7. Even in the summer when we run low flow, we still flow and have to use the dry weather pumps to pump over to the retention basin.” 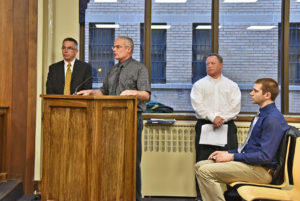 “We are allowed to overflow into the river. We are allowed to during excessive rain that cannot be handled by the design of the plant. But this current situation with the pump is not including that. They expect you to keep your plant running at 100 percent. That’s your responsibility; the mayor’s and me as superintendent to keep that running. So we are in jeopardy of violating our SPDES (State Pollutant Discharge Elimination System) permit if we don’t keep an eye on it.”

“That SPDES permit is critical and it defines all the categories that we must meet to put water out in the Niagara River. And what cleanliness level it must be at.”

“If you want to see it I can show it to you. But sometimes it’s a little dry reading for people. For me. I’m a geek. I like it.”

Ken Knutsen of Barton & Loguidice said in order for the city’s waste water treatment plant to receive funding from grants, the proposed multi-million dollar repairs and upgrades need to be “shovel ready” with a comprehensive engineering plan.

Knutsen said because of the city’s average income, North Tonawanda could apply with “hardship” status that could bring zero percent financing for 30 years.

“I might be complaining,” Davignon said. “But at the end of the day these are legitimate complaints. They are real. I can show them to you. I can gladly show you the equipment just laying on the floor in pieces. It’s all over the place.” 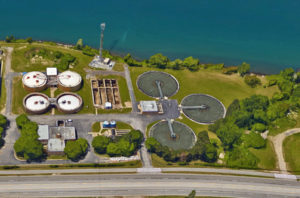