The city says it can use these closed-circuit cameras to help solve crimes as well as observe illegal dumpers.

However, most of the 22 cameras throughout the city are inoperable right now, and they work on a “hub” system, which means if the main camera goes down, the others don’t work as well, according to Niagara Falls City Administrator Nick Melson.

The city also owns two trailers equipped with a telescoping camera that Melson said could be used for observing illegal dumping. The trailers are solar powered and the camera is triggered by motion sensors.

In addition, the police chief can observe the video feed at any time on his smartphone.

Replacement parts recently arrived for a broken camera at Gill Creek Park, and Melson expects it to be operational today.

Discussion at Monday’s common-council meeting also centered around the need for the city to upgrade its information technology infrastructure. ”The internet basically needs an update, our phone system,  you name it,” Melson said.

The city’s fiber optic network also requires to be upgraded so it can handle the video stream from the security cameras and Melson is in talks with four vendors.

In other matters, Councilman Andrew Touma also reminded the board and city employees — the mayor was not present for either session — that he wanted to have an open discussion about a spending plan for the casino funds, and soon.

Touma said $5.4 million in casino funds still remain, and that the council and administration should exercise caution when spending the remainder.

“It’s my duty as a city administrator to provide a safe working environment for everybody,” he said, adding that a security officer will also be on site. 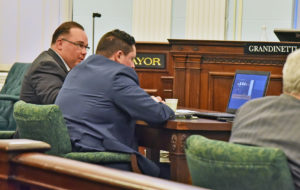