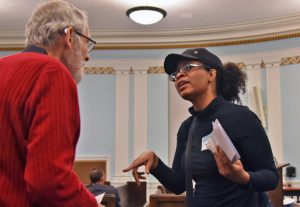 ” Senator Ortt said, “I fully support much-needed public-private investments in the City of Niagara Falls. In the past several years, we’ve taken concrete steps to enrich the Falls tourist experience by improving the landscape and protecting the environment. We’ve done this while also focusing on rebuilding the economy and enhancing the quality of life for Falls residents. The proposal for a lodge on Goat Island runs contrary to the steps we’ve taken and the overall master plan for Falls development. A state lodge within the park would create unnecessary competition for hotels in the downtown corridor and divert revenue directly from the city to the state – all while discouraging tourists from extending their stay in the city. This is simply the wrong project in the wrong location.”

Residents concerned about Governor Cuomo’s proposal to put a lodge on Goat Island descended upon city hall Tuesday and were there to hear a very pertinent text message read by Councilwoman Kristen Grandinetti.

“We will be rolling out a new approach with multiple options for the lodge with massive public input. Thanks for supporting to table tonight.”

The text was from the governor’s office, but the resolution didn’t get tabled, though.

In fact, it passed unanimously, calling on the City of Niagara Falls to reject any proposal that names Goat Island as the location.

Alysia Welch-Chester (above right in photo) from RISE Niagara was on hand, talking to residents and decision makers as well as passing out leaflets, asking residents to sign and share an online petition “urging our elected officials to re-direct funds for development from the State Park into the City of Niagara Falls.” (http://petitions.moveon.org/sign/gov-uomo-redirect-finances).

Councilman Kenny Tompkins, who has already come out against the project, said he took the statement as a positive sign.

He also said State Senator Rob Ortt and Assemblyman Angelo Morinello are also against the project, and will most likely be issuing statements soon. (“They are going to hit it a different way,” Tompkins said.)

“It’s pretty unanimous,” he added in regards to the local opposition.

“We had three pages of speakers tonight,” he said. “That’s the most I’ve ever seen.”

Tompkins said the council and residents need to stay vigilant as to what moves come next.

“We have to keep watching,” he said. 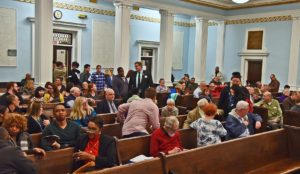