Mumblers, whisperers need to turn up the volume at government meetings

It’s the most basic level of transparency.

If you’re an elected city councillor, department head, other city official or member of the community and have something to say at a governmental public meeting, it stands to reason

I cover city council and town board meetings in Niagara Falls, Lockport, Wheatfield and North Tonawanda, and I can tell you this is something that afflicts all of them to one degree or another.

Of course, I hold the last group — members of the community — least accountable because they are generally not professionals when it comes to communication nor do we really expect that. (Although it never hurts to be a good communicator.)

Elected officials, though, and department heads and other high-ranking city employees should be ready to communicate professionally — at least in one category: amplitude.

Trust is something we — the people — require from civic officials.

In addition to making regular reports a part of every city council meeting — much like the Town of Wheatfield already does — department heads should deliver those reports at the podium. At least into a microphone. (Not slouched in their seats.)

So we can hear it. We really want to hear it.

Often, I feel like when department heads answer questions from council members or the mayor that they are responding merely for the benefit of the council and the mayor. (And since these rooms aren’t necessarily filled with teenagers — aside from the compulsory attendance of P.I.G. participants — you might be dealing with an audience that has impaired hearing.)

One thing contributing to this are the microphone setups the councils employ. They are simply too far from the councillors’ mouths — often on the far side of the desk — with short necks, and they don’t really work well that way.

(You don’t see Susan Boyle holding her mic three feet away from her mouth.)

In the long run, many of these setups need to be rethought, and their maintenance and implementation improved. But in the here and now, councillors that care about their constituents, others in the room as well as providing the most basic layer of transparency — their words to the people’s ears — they will move the microphone closer to their mouth — or mouth close to the microphone — so that the amplification system adequately carries the signal throughout the speakers in the room. (Keep in mind that you need to aim the top of the microphone at your mouth; speaking into it off axis generally produces much weaker results.)

Additionally, if members of the community ask council members or department heads to “speak up” (the please is, of course, always implied) often the request is ignored and officials continue to speak in low tones. Sometimes disrespectful attitude is served up in return as well, and I find this infuriating, sitting there in silence while the rest of the room does the same.)

As council attendance continues to grow and more residents and a new generation becomes interested in the local governments representing them, it’s all the more important for everyone to speak more loudly and clearly.

Into the microphone (some government meetings are recorded … and all should be.)

So we can hear you.

We — the people — really want to hear you. 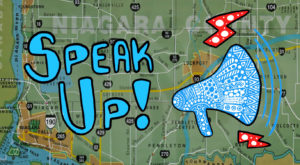 Posted In
Uncategorized
Tags
About The Author