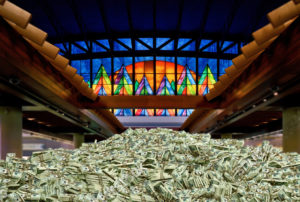 “That leaves us with a little over $5 million in discretionary spending for casino dollars,” said councilman Andrew Touma at the Niagara Falls Common Council’s Monday meeting.

“And we haven’t even talked about roads and infrastructure yet,” Touma said.

“I would appreciate the opportunity sit down with my colleagues and establish a finance committee — working on the 2018 budget — but also talk about how the casino dollars for the rest of the year are going to be spent.”

“So we have an idea and we have input. Obviously, we want some carryover to next year, and that may mean less money for roads or more money to put toward economic development.”

“I would love to have that conversation with the public not only about the casino dollars but also about the 2018 budget. And so we could get input from other folks. Sort of like what (Community Development Director) Seth (Piccirillo) does with his budget where he gets a lot of public input as well. He seems to be very successful with that. I think we need to get on that soon. And (City Administrator) Nick (Melson), we talked about an open dialog as far as working on that budget as soon as possible.”

Melson replies: “I would look forward to doing that. But I would like to echo what the financial advisory panel recommended to this body, and what I’ve talked about to the council members, and that’s the need for a full-time budget director to make sure that our revenues meet our expenditures. That we are managing money correctly and we are sticking to our long-term plans. So I hope we can get that in place.”

“I’m not here to suggest as to where you allocate city funds. I am here to encourage discourse in how you allocate casino revenue. City government needs a casino revenue spending policy. A policy that is written down and incorporated into our city budget ordinance. The city budget is law in the City of Niagara Falls. You can’t get just play with it — although it’s ben done over and over the last 10 years. “

“When this agenda was printed out, our budget was only three weeks old. All three items,(agenda items #3, #12 and #13) those items should have been dealt with and discussed during the budget process in November less than two months ago.”

Agenda item #3 was “ Funding to pay for City’s E911 Services”; Agenda item #12 was “Funding for Demolitions-Department of Code Enforcement”; and #13 was “New agreement with the “SPCA” for sheltering services, which was tabled.

“The big question is, why are you using casino revenue instead of fund balance?” Anello asked. “Who determines what is discretionary spending of casino revenue? And as far as a budget director is concerned, the city council created a new position in the controller’s office. That position is now $77,500 with a $10,
000 stipend. I think with that $10,000 stipend you could put ‘slash budget director’ and it would’t cost you a dime. Just reprint that page.” 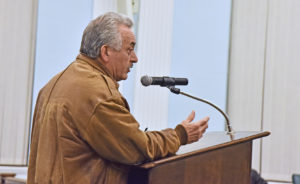