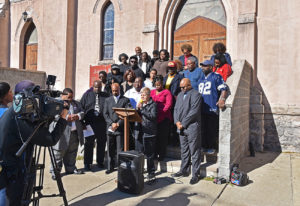 A 70-year-old man was pushed to the ground last Friday outside Sam’s Deli on Highland Avenue in Niagara Falls.

Inside the store, Rev. William Feagin was also aggressively challenged on his religious views by the same much-younger man.

Now, lawmakers and community members are urging charges for the assault and a boycott of the business where a video of the incident made its way onto social media.

“We are here today in response to an incident that occurred,” said True Bethel Pastor Darius Pridgen. 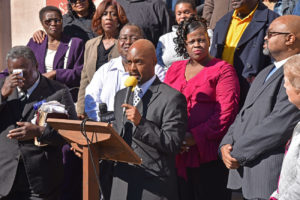 “And we stand united to let this city know that there will be things that will not be accepted. Especially when it comes to a child of God. The video has been circulated throughout Facebook, and the blatant laughter while it occurred. We will not stand for blatant disrespect and abuse of anybody whether they are black, white, mixed, polka dotted or whatever. We will not stand for disrespect in our community.”

“Also, the devices of the enemy are to divide us and to destroy us. When we should be working together. We are fighting against each other. We should be trying to come up with goals and things to make sure our communities are safe for our families and children.”

“But instead we find ourselves fighting, arguing and bickering and nothing is getting done. Our role today is to let the enemy know by any shape, form or fashion that we will not stand for injustice. For an injustice for one is an injustice to all.” 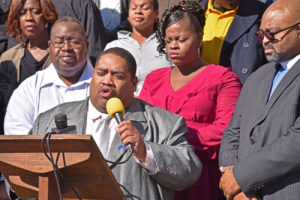 “Let’s give it up for Legislator Owen Steed for all he does,” Pridgen said.

Niagara County Legislator Owen Steed: “Thank you. Pastor Pridgen. Dr. Martin Luther King Jr. said, ‘We must live together as brothers or perish together as fools.’ The assault of Rev. Feagin this past Monday was not only an assault on Rev. Feagin, it was an assault on our entire community. Rev. Feagin is a 70-year-old- man who didn’t deserve what happened to him. Those in the store who who put this on Facebook are just as guilty as the man who pushed him. This is a store owner who has a store in our community and wants us to support him. Well, now we are after you.” (Audience: “Yes. Praise the Lord!” with applause.) 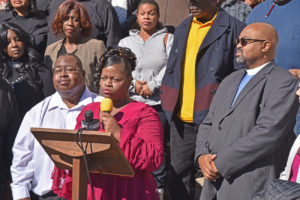 A woman takes the microphone.

“My name is Patricia Cox. I’m the daughter of Rev. William Faegin, and this is my husband Tyreese. We are speaking for him, but I know from my heart and just from being his child and I know that he is a good man and he did not deserve what happened to him. And the fact that someone decided that they got mad at him, they decided to push him over something. And the disrespect that came along with that assault, and I call it bullying, that’s what I call it. Bullying. The disrespect that people put with that assault made it even worse.”

“He has prayed. He has preached. He has led devotion. He has dedicated his whole life to Christ. And helping people in this community. For my dad, we stand here today and we speak for justice.”

“And anyone who has a business in this community, and they are not law abiding citizens and they are doing illegal things. You will get caught. (Hallelujah!) And this is not good. And so today we come to you. We ask for all the public to help us in our efforts to end this injustice. He’s a senior citizen. And just to push down a senior citizen alone is a disgrace. It’s a crime. (Yes it is.) And I just want to tell the public and everybody that we thank Trinity Baptist Church, we thank Pastor Hardaway, my dad’s pastor; he is a product of Trinity Baptist Church. And we thank Owen Steed. And we have great family members. We have Pastor Pridgen. We want to thank him also for letting us hold this right here.”

“We just want justice to be served. We aren’t doing this to get even with anybody. No. When they assaulted him that day, they broke the law. And he is a good man, and we speak for him. And anybody that knows him knows that he’s a good man. And he does try his best. Thank you.” 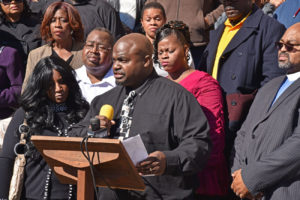 A man takes the microphone.

“I’m Rev. Feagin. I’ve prepared something today. Today I stand before you in disgust of what took place at Sam’s Deli at 2712 Highland Ave. Niagara Falls NY. Sam’s is a local business that has been in business for approximately for two years. Their main customer base consists of those who live in the surrounding areas. Sam’s Deli and Grocery is estimated to generate $127,296 in revenues. And employs approximately three people at this single location. It’s location, which is conveniently located for those who have no car or can’t walk 1.3 miles to the nearest Tops. Or further than to any other local grocery store to find food.”

“However, my uncle, the Rev. William Earl Feagin Sr. has been a minister in this same community for well over 45 years. (Yes!) He and wife, who’s now deceased, raised three children, who all grew up and raised children of their own. He taught them and us family members to love one another respect ourselves, respect other cultures, and their religion.” 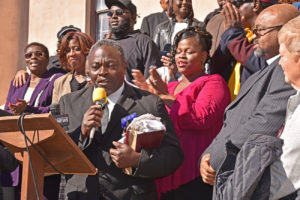 “This grandfather, treasured uncle, cousin, friend and acquaintance to many who has been a beacon of hope was publicly bullied, disrespected with lewd and offensive words, challenged about his beliefs, and intimidated and assaulted on their premises. And they, the owners of Sam’s Deli, through their video recording were boldly brazen enough to put it on Facebook and trended on their business page to further cyberbully him.”

“Now I pray that the perpetrators who created, posted and intended their brand of public bullying that was meant for ridicule, humiliation in the visual be put on public display so that others would join us in boycotting and eventually shutting down their business. Sam’s Deli owners need to boldly feel what it’s like to have their image put on display and your name tarnished. They need to provide a public apology and make amends on this issue. No patron of that store needs to experience what took place in that store.” (Amen. Hallelujah!)

Pastor Pridgen: “Rev. Feagin is here. Rather than have him come and re-live what occurred to him, and rather than having him come and give remarks. If you know Rev. William Feagin, it doesn’t matter if he’s at a grocery store. It doesn’t matter where’s he’s at. He’s going to have church right where he’s at. So Reverend why don’t come give us one of those devotion songs that you do one good time before we close out in prayer. Come give us that devotion that you do. Come on Rev! Come on y’alll!. Know how we does!” 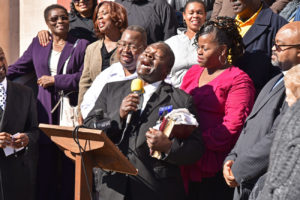 “I could go on … but I don’t want hold you too long.” (Laughter and applause.)

Pridgen continued: “For those who think we are just about talk and not about action. There has been a complaint filed. The chief of police is aware of it. And don’t worry.  We want you to know that when you affect the Kingdom of God, we are going to get you, we’re going to find you, we are going to make sure (Amen!). ‘Vengeance is mine’ sayeth The Lord but we come to take some things by force. So don’t be confused. There are others that are leading some endeavors to protest. So when they begin to announce there will be protests and we are going to be start one by one. One store by one store by one store. So when you affect our Kingdom we coming one store. When you’re selling Lucys and selling drugs and allowing guns out of your store, we are coming for you one by one by one by one by one!”

Reached after the event, the owner of Sam’s Deli, Sam Ahmed, said he was sorry for the incident and wanted to explain some things. 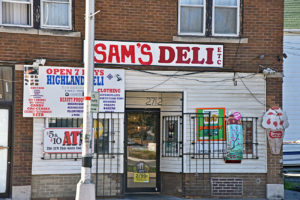 he video, Feagin leaves the store and Ahmed plays black-and-white security video of Feagin walking away on the sidewalk and then getting pushed violently and falling into the street.

What was shown in the video wasn’t live, he says. It was a recording from the day before.

The entire recording began as a live stream on Facebook, Ahmed said. He did not post it after the fact, he said.

Ahmed said he’s willing to explain his side of the situation to community leaders.

Because of the incident, Ahmed said he’s been the recipient of racial discrimination on Facebook because of his Arabian descent.

“I want to say what happened to the Reverend is disgusting,” Ahmed said. “But you have to attack the person responsible for the assault.”

“But I would also like people to know it’s been blown out of proportion.”