Proclamations, standing ovations and the heartfelt gratitude of an entire city was on display Wednesday night for the assembled scores of firefighters that battled the largest fire in Lockport’s history and saved the city’s west-end neighborhood. 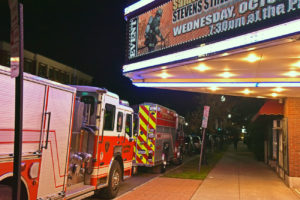 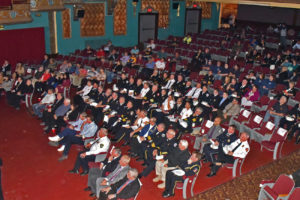 More than 60 area fire departments provided mutual aid during Lockport's historic blaze and many of them showed up Wednesday evening to represent their departments. 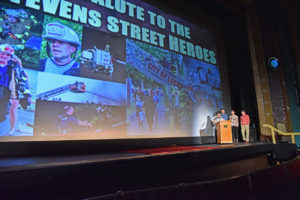 A Stevens Street family thanks the firefighters that saved their home and neighborhood. 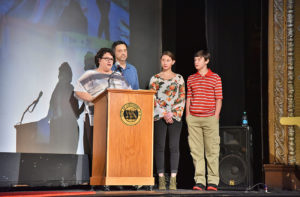 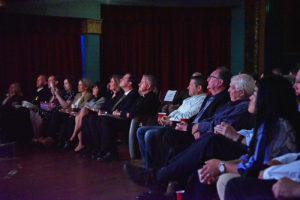 Members of Lockport's common council as well as state and city officials. 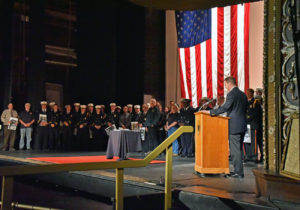 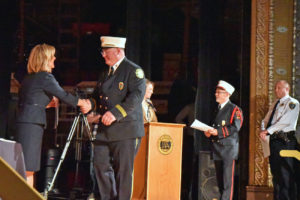 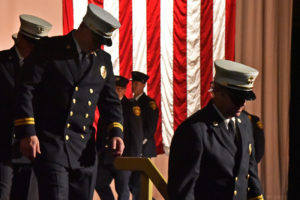 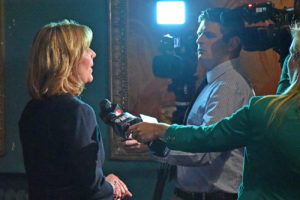 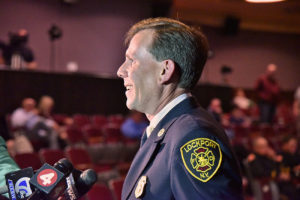 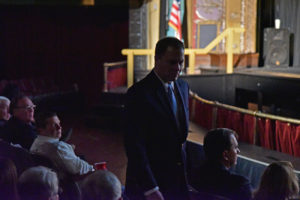 Sen. Ortt after leaving the stage. 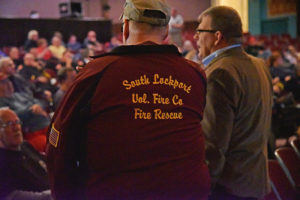 The following is Fire Chief Pat Brady’s entire speech before the assembled audience of firefighters, residents and area officials.

“Hello. I would like to welcome everyone to the Historic Palace Theatre here in Lockport. Please let me begin by saying that  I intended my portion of speaking tonight to be a short and direct speech designed to make a sincere expression of thanks to all of the parties involved in this incident. Unfortunately I found the short part to be an impossible task.”

“Let’s get started: LFD — These are the people I personally am most grateful to have the opportunity to live with work with and really continue to be impressed by, not only for the professionalism and work ethic they continue to show to our chosen profession,  but the selflessness and commitment to serving our community that was on full display while we worked on Stevens St. The month of August 2016 was a record setting time for our Department, as we dealt with a record 7 structure fires in a very brief period of time, this includes of course the reason we are all here tonight, the largest fire on record in recent history not only for our Municipality but also for the County of Niagara. Despite a lot of negative connotations that some have attached to and the criticisms that have been expressed about our Department over the years, I firmly believe that the Lockport Fire Department certainly proved its mettle and true dedication to the residents of the City of Lockport during this period of time. On average in the over 66 hours of extremely high heat and humidity that the Stevens St incident was comprised of, these men collectively averaged working for over 40 hours on  that scene, with most of that time spent laboring in a large plume of smoke while wearing what is in essence a very heavy snowmobile suit.”

“I would like to take a minute and recognize a few of the people from our Department who I feel deserve some extra credit; All 4 of our Assistant Chiefs Tom Lupo, Mike Seeloff, Lou Farina, and Joe Morello whose leadership once again proved to be invaluable  both to me personally and our Department during this event. Our Fire Investigators, MTO Luca Quagliano and Firefighter Jon Fredrickson, who provided what was described by Officials from the OFPC as extraordinary work in completing a terribly difficult investigation at a huge scene all in record time, and finally Capt. Mark Seeloff and the 3rd Platoon for arriving at a very large fire scene and  using their years of training and experience in making the right decision to protect the structures outside the facility instead of trying to win what surely would have been a losing battle to extinguish a huge volume of fire before these residences also became involved.”

“Gentlemen, I know in the past we collectively shunned the limelight and had reservations about accepting praise for what we always considered just us doing our jobs, but please just take a moment and let us all recognize your  considerable efforts in bringing this incident to a successful conclusion.”

“Our most genuine gratitude is owed to all of the many and various agencies who came to our aid in a very great time of need for assistance.”

“I would like to acknowledge the support of our own Municipalities employees. From the guys at the streets department,  to Chief Operator Dennis McNamara and all of the employees at the Water Department (what an incredible job they did in continuing to answer my frequent and for a while incessant requests for more water.) to Chief Neithe’s personnel at LPD and in particular Lt. Rodney Peters who spent most of the first night telling me “no problem Chief” whenever I asked him for assistance.”

“To Sheriff James Votour and the Niagara County Sheriffs Department. Without the considerable support  this agency provided throughout this incident from a state of the art command post to fly overs from the Departments helicopter we may not have had such a successful outcome. At the heart of this operation was another section of the Sheriffs Department, the Communications Center. Mark Kasprzak and the Dispatchers that work in that room all deserve special recognition for truly being the glue that held this operation together. We would have been lost without this group of very unsung heroes.”

“Next to my counterparts the Fire Chiefs from North Tonawanda, Niagara Falls and the City of Tonawanda our truest appreciation for sending your personnel and equipment directly to the scene, for having them standing by either in case we needed them or when  they were stationed in our own firehouse to answer all of the calls for service that arose during this time period.”

“To the over 275 firefighters from the 54 Volunteer fire agencies and 4 different counties that either responded to Stevens St.  or stood by covering all of the outlying areas in Niagara County, your sacrifice in personal or family time, leave from work, or from whatever else you could have been doing to come to Lockport and spend time sweating and laboring to help extinguish this fire will never be forgotten. Without your much needed assistance I am certain we would have had a much different outcome. I would like to take a minute and give some individual recognition to a couple of these agencies first Chief Ben Ripson and the South Lockport Fire Company who operated out in the rear of the facility for days and played a large role in keeping the fire from making it into the front manufacturing buildings that first night.  Chief Tim Williams and the Wrights Corners Fire Company, if you have not seen Tim on YouTube getting a crowd of bystanders to move some charged and very heavy supply hose take a minute to find it and watch it. Without this effort and the most timely arrival of one of their fire engines, we may not have been able to hold the fire out of all of the residential structures on Stevens St. Also a special acknowledgement  to Rob Hoover from Sanborn fire company who flawlessly set up and ran the tanker shuttle operation.”

:I would be remiss in not thanking all of the stores and restaurants who donated a huge amount of food and beverages throughout the incident your generosity will not be forgotten.”

“I personally could not have been any luckier to have some of the next individuals at this incident, without their ability, knowledge, assistance and sage advice my job would have certainly been much more difficult. First my thanks to Area 4 Deputy Jeff Baes and EMS Deputy Chad Shepherd for their many hours in the command post. Haz Mat Deputy Mark Hain and Haz Mat Capt. Micheal Costello who were seemingly omnipresent in the command post running air monitoring at the scene and throughout the effected areas of the City. Finally to Fire Coordinator Jonathan Shultz and to Les Meyers who acted in Jonathan’s stead during part of the incident my deepest gratitude goes to you both, your knowledge and ability proved to be irreplaceable in ensuring that all of the formally mentioned people and agencies came and then kept coming until this incident was over. Gentlemen I salute you both!”

“To the residents of Stevens St and the surrounding area that were evacuated, thank you for your patience and understanding during that time period, we do realize that it was a difficult time, but your health and safety were our main concern. Finally to the community at large, your outpouring of support for not only all of the emergency personnel at the scene, but for those residents who were evacuated was absolutely amazing and makes me immensely proud to call Lockport my home.”