Residents of the City of Lockport will see their 2017 tax rate increase to 3.25 percent and tax bills jump to 3.64 percent, according to City of Lockport Mayor Anne McCaffrey under her proposed budget for next year.

Water, sewer and refuse rates are being held steady at their 2016 levels.

Alderwoman Anita Mullane said she was pleased rates weren’t being increased but said she’s going to be looking at the budget line by line.

“We’re hoping more savings can be squeezed out,” Mullane said. “We believe the public was sending a message ‘We don’t want you doing business the way it’s always been done’ — or we wouldn’t have a whole new council.”

Mullane said she was displeased the council received the budget only a day before it was sent to the state’s comptroller as part of the city’s financial rescue plan. “That means any changes the council may make to the budget will have to be approved by Albany,” Mullane said. “I would hope that the state would honor our requests to any changes that we would make because it would only be to save money.”

At Wednesday’s common council meeting, McCaffrey presented her proposed 2017 budget to the council and citizens. 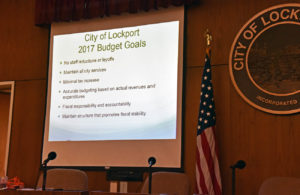 “The first thing we started with again this year were our budget goals,” said McCaffrey at the start of her 2017 budget presentation. “So the goals this year were no staff reduction or layoffs and maintain all free services — and in some areas we are going increase services a bit — have a minimal tax increase, ensure accurate budgeting based on actual revenues and expenditures, maintain fiscal responsibility and accountability, and maintain a structure that promotes the fiscal stability that we’ve achieved so far.”

“That is a decrease of about $3 million, which unfortunately starts us off in a bit of a bad position because that equates to about a $50,000 reduction,” said McCaffrey.

Another area that saw an increase was employee benefits. “That’s health insurance and pension, which are substantial costs to the city,” McCaffrey said. “$8.5 million in 2016, going up to $8.8 million in 2017. That’s about a 3 percent increase.”

“So the total proposed expenditures for the city for 2017 are $24,198,471, which is a three percent increase over last year,” McCaffrey said. 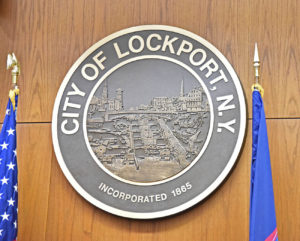 “I should indicate that the actual tax rate increase is 3.64 percent. The tax levy is 3.24. But when you actually get your tax bill it will be a 3.64 percent increase if this is adopted.”

“The allowable tax cap as mandated by New York State will allow us spend $71,000 more this year, which is a .6 percent increase. What we are proposing is would go over that tax cap,” McCaffrey said.

Mullane said: “We had such a hefty tax increase last year that I was hoping for staying at the tax cap.”

“The property tax rate per thousand this year is $16.99,” the mayor said. “So homeowners can determine their assessed value by multiplying by 16.99 and that’s the taxes you’ll pay to the city this year. In 2017, we’re proposing that go up to 17.61 per thousand.” 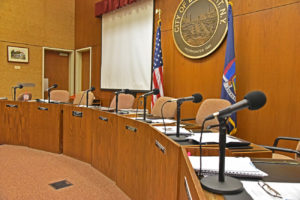 “On Nov. 2, we will have a public hearing, where the public can comment on this budget. You are certainly more than welcome to contact me or your council member before then to provide your input as well. But we will have a public hearing on Nov. 2. By Nov. 9th, I expect to hear from the comptroller’s office as to what their determination is, and we would expect the council to adopt the budget on Nov. 16th.”

“I should  let the public now that the process started back in August. At the first meeting in August, I presented the council what our budget goals were for last year. And I wanted to replicate them again this year. And I sought feedback from the council members on those goals. I heard from Alderman Wohleben, Alderman Oates and Alderman Abbott regarding their comments. I have incorporated those to the best that I could and into this budget and certainly tried to keep that tax rate down for residents.”

“But one of the most important things is that the budget is balanced and it is based on actual accurate numbers that we project from previous years’ history. So knowing that our revenue is accurate and knowing that our expenditures are accurate is extremely important.”

“One thing that I should note is that on the revenue side we are projecting about a $224,000 decrease in sales tax revenue for next year. So right off the bat that’s $224,000 that we need to make up because we are expecting a decrease in that sales-tax revenue. So I do want the pubic to be aware of that as well.”