Frank was there with Mark Daigler of the traffic safety committee pitching a plan to overhaul the city’s east-west truck route.

Truckers were allowed to travel Wheatfield and Robinson years ago, Frank said.

“People on Wheatfield and Robinson didn’t like the fact that they were using those,” Frank said. The city council subsequently approved changes to the route to keep truck traffic away from those residential areas.

“So what ended up happening is now you have truck traffic that comes in from River Road,” he said. “Your east-west you can come in from Felton. You can go down Oliver, but the only east-west is on Robinson Street between Oliver and River Road. From there, you have to get back on Oliver and go up to Sweeney. Well, now you start going down the train bridge and you take Sweeney and wrap back around. I don’t know how you’re going to get trucks down there. It’s a nightmare,” Frank said.

“We looked at Wheatfield Street and Robinson Street,” Frank said.

“We kinda felt that Wheatfield — for the most part — probably has more houses on it. But having said that, Wheatfield you can go from the river all the way out to the Boulevard with that being a more direct route. If you’re trying to appease more people, Robinson would be the better way, and you’re taking Robinson and coming down Division.” 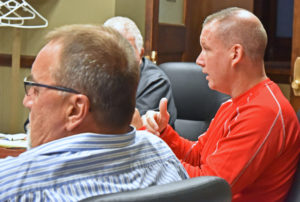 Traffic Safety committee member Mark Daigler, left, and Rob Frank of the NT Police Department talk to the NT council about the delivery truck problem in the city and how to improve it. Their immediate suggestion is to route east-west truck traffic down Robinson and Wheatfield streets.

Ultimately, instead of choosing one or the other, Frank said he came up with this solution: “My thinking is to do both because then you are sharing the wealth and splitting them up.”

Second Ward Alderman Donna Braun, who represents both streets, said this: “I’m just thinking about the residents who already have complaints about the trucks coming down the street.”

Because of the winding route, truck drivers are claiming to get lost and are often seen on whatever street their GPS is providing.

“I probably called the police department five or six times when we were doing work zones and things of that nature,” said Daigler. “Truckers are just getting lost. So I would call and speak to the captain or police chief and say, ‘Hey can you take it easy on these guys? I’m sending them down Wheatfield.’”

Regarding enforcement, Frank said, “The police chief says, ‘If it’s not a truck route, you’re not taking it.’ And we enforce it,” Frank said.

“We’re not necessarily appeasing the truck drivers,” Frank said. “We’re just trying to make it safer because trying to go down Oliver and turning onto Sweeney Street. It’s just tight. We have to fix something somewhere. Obviously you’re allowed to come into North Tonawanda to make local deliveries.”

Alderman Robert Pecoraro said this: “The dispatchers need to be smarter in these organizations to make sure they know how to route through these areas.”

City Clerk Dan Quinn asked if the streets were wide enough for a semi tractor trailer.

“They do anyway,” Frank said. “We’ve got big businesses in the city. It keeps on expanding. And that’s great for the city. We’ve got to find a better way than trying to turn these trucks around and going all these different ways.”

“A delivery that could take 5 minutes, you’re making these truckers take an hour,” he said.

“But we have to do something.”

The council unanimously agreed to let Frank and Daigler approach City Engineer Dale Marshall as well as Superintendent of Public Works Brad Rowles to continue to research the idea.

“This is the beginning stage,” Frank said. 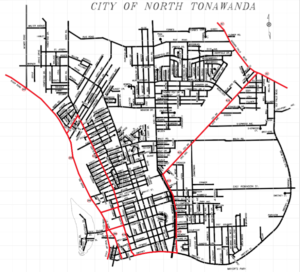